Before 1947, the British India had 17 Provinces and 565 princely states. The Instrument of Accession was a legal document first introduced by the Government of India Act 1935 and used in 1947 to enable each of the rulers of the princely states under British paramountcy to join one of the new dominions of India or Pakistan created by the partition of the British India.

Jammu and Kashmir was a princely state within the British Indian Empire. By the rules of the British transfer of power in the Indian subcontinent in 1947 the ruler of the state, Maharajah Hari Singh, with the departure of the British and the lapsing of paramountcy (as the relationship between the state and the British Crown wastermed), could opt to join either India or Pakistan. But the Maharaja opted to remain independent from August 15, 1947 onward. On October 26-27, 1947, India unilaterally sent its forces to Srinagar and forcibly occupied the state when the state was still independent.

The historian Alistair Lamb in his book The Myth of Indian Claim to Jammu & Kashmir’ has explained at length how the Indian forces forcibly occupied the state when the maharaja was on a tour of the state. According to Lamb, it was a myth that the maharaja allegedly signed an Instrument of Accession of Jammu & Kashmir to India on October 26, 1947, and that Lord Mountbatten accepted the same on October 27, 1947.The Indian claim admits that a letter from Lord Mountbatten to the maharajah, dated October 27, 1947, acknowledges that once the affairs of the state have been settled and law and order is restored “the question of the State’s accession should be settled by a reference to the people.” 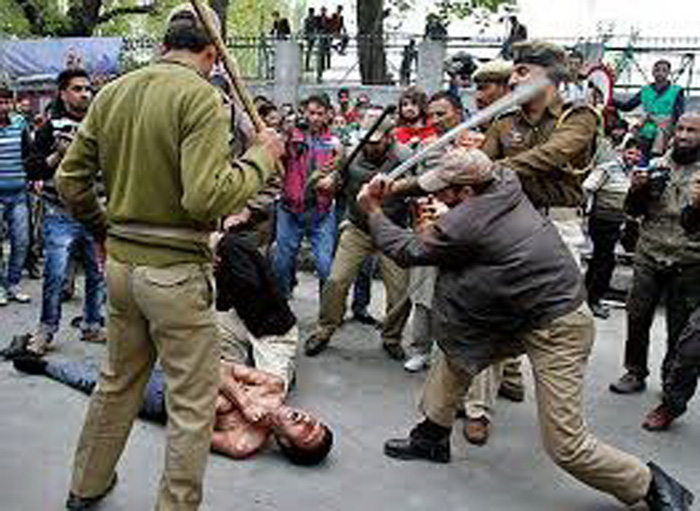 A recent research, however, has demonstrated beyond a shadow of a doubt that the date of the alleged accession is false. According to Lamb, the documents of accession, if there were any, were signed after India’s forcible intervention in the state of Jammu and Kashmir while the state was still independent. Thus according to him, any agreements favourable to India signed after such intervention cannot escape the charge of having been prepared under duress. This view finds support from the fact that the alleged Instrument of Accession was not published until many years later. It was not communicated to Pakistan at the outset of the overt Indian intervention in Jammu and Kashmir, nor was it presented in facsimile to the United Nations in early 1948 as part of the initial Indian reference to the Security Council.

To date, no satisfactory original of this Instrument as signed by the maharajah has been produced, although a highly suspect version, complete with the false date October 26, 1947, has been circulated by India since the 1960s.There is no doubt that had Pakistan been aware of this falsification of the record it would have argued very differently in international for a from the outset of the dispute, and had the United Nations understood its true chronology it would have thrown out the Indian claim in the very beginning.

According to Lamb, the documents of accession, if there were any, were signed after India’s forcible intervention in the state of Jammu and Kashmir while the state was still independent

In September 1947,the government of India advocated, as a matter of policy, the holding of a plebiscite in the princely state of Junagadh, which was in many respects the mirror image of Kashmir. Here a Muslim ruler, the nawab, had formally acceded to Pakistan on August 15, 1947 despite the fact that the overwhelming majority of his subjects were Hindus. However, as Jawaharlal Nehru said on September 30, 1947: “We are entirely opposed to war and wish to avoid it. We want an amicable settlement of this issue and we propose therefore, that wherever there is a dispute in regard to any territory, the matter should be decided by a referendum or plebiscite of the people concerned. We shall accept the result of this referendum whatever it may be as it is our desire that a decision should be made in accordance with the wishes of the people concerned. We invite the Pakistan Government, therefore, to submit the Junagadh issue to a referendum of the people under impartial auspices.”

In India’s eyes, in other words, Junagadh’s accession to Pakistan was at best only a provisional subject to referendum. India, moreover, considered that the need for such a reference to the people was specifically determined by the fact that a majority of the state’s population followed a different religion to that of the ruler. A plebiscite in Junagadh was duly held in February 1948 when the vote was for union with India.

In India’s official thinking, it is clear, there was no question of a plebiscite in any state where both ruler and people were non-Muslims. Thus when the Kashmir crisis broke out in October 1947 the plebiscite had already been established as the official Indian solution to the problem. On October 25,1947, before the Kashmir crisis had fully developed and before India’s claims based on the maharajah’s accession to India had been voiced, Nehru in a telegram to Attlee, the British Prime Minister, declared: “I should like to make it clear that [the] question of aiding Kashmir…is not designed in any way to influence the State to accede to India. Our view, which we have repeatedly made public, is that [the] question of accession in any disputed territory must be decided in accordance with the wishes of the people, and we adhere to this view.”

At a meeting on November 8, 1947 between two very senior officials, V P Menon for India and Chaudhri Muhammad Ali for Pakistan, a detailed scheme for holding a plebiscite in Jammu and Kashmir was worked out, with the apparent blessing of the Indian Deputy Prime Minister Vallabhbhai Patel, in which the following principle was laid down: That neither Government [of India or Pakistan] would accept the accession of a State whose ruler was of a different religion to the majority of his subjects without resorting to a plebiscite.” At the UN forum, therefore, both the countries agreed to the principle of holding a plebiscite. But from then onward, two major questions were debated in the UN, which unluckily kept the matter unresolved to this date.

First: how and in what way should the state be restored to a condition of tranquility such as would permit the holding of any kind of a free and fair plebiscite. Second: who should supervise the plebiscite when it finally came to he held. On both questions, Pakistan agreed that the plebiscite be held under the auspices of the UN Nehru continued to express his reservations about ‘foreign’ intervention, which was a gimmick to throwing the matter perpetually in cold storage.

Consequently, the situation Jammu and Kashmir remains unresolved to this date. Now it becomes a moral obligation of the world community at large to see that the Kashmir dispute is resolved in accordance with the principles of the accession of the states and numerous Resolutions of the United Nations for its peaceful resolution. It is preposterous that India should suddenly realise after 70 years that it is its internal matter, and hence it can go about it in whatever manner it pleases her. India must not be allowed to ride roughshod over its international obligations and unilaterally change the status of the state to merge it in its Union. It is an act of brigandage that must prick the conscience of the world, forcing India to abide by its international commitments.