Economy ready to take off: Firdous 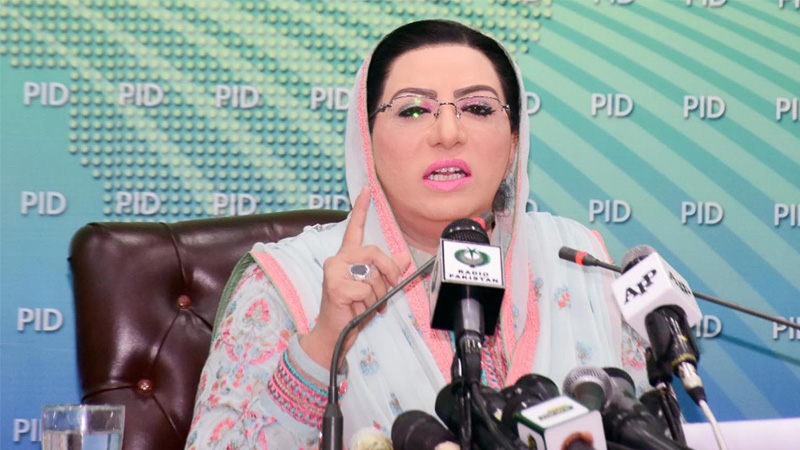 Special Assistant to Prime Minister on Information Dr Firdous Ashiq Awan Tuesday said the country’s economy is set to take off after a year of turbulence.

“Now the economy is ready to take off as the current account deficit has reduced by 30 percent to $13.5 billion from $ 19.5 billion in the previous year,” she said while briefing reporters about the decisions taken at a meeting of the federal cabinet. She said the cabinet discussed the government’s successes during its first year, particularly how it revived the shattered economy. The cabinet was updated on the foreign loans and the efforts to involve businessmen in boosting the economy, she said.

The special assistant said the prime minister directed that the overseas Pakistanis should be encouraged and facilitated so that they can invest in businesses in Pakistan. She said during the first year, the Pakistan Tehreek-e-Insaf (PTI) government remained focused on bringing stability in the country. The second one will be the year of building Pakistan as industrial and construction sectors are being revived, she said. “The two challenges for the government are jobs creation and bringing new investment,” she said.

The cabinet accorded approval to the landmark Pak-Turkey Strategic Economic Framework for forging stronger cooperation between Pakistan and Turkey. Prime Minister Imran Khan will head the high-level cooperation committee from Pakistan side and Turkish President Recep Tayyip Erdogan from his country’s side, she said. The framework, she said, has nine joint working groups that will be headed by Minister for Economic Affairs from the Pakistani side. All sectors of the economy will be covered by the working groups and 71 actionable items have been included into it. The items including free trade agreement, technology transfer, capacity building, and defence cooperation have been made part of the framework, which will help connect Pakistan with Central Asia, Russia and the West, she said, adding that like China-Pakistan Economic Corridor (CPEC), which is a game changer, the economic framework with Turkey will also prove to be a landmark agreement for Pakistan.

The special assistant said the cabinet brought under discussion a 13-item agenda. The prime minister instructed every minister to bring practical proposals which were beneficial to the public.

Minister of State for Parliamentary Affairs Ali Muhammad Khan told the cabinet about the efforts being made for redressal of the people’s grievances. The prime minister directed the Grievances Wing of Ministry of Parliamentary Affairs and PM Portal to share information on public complaints with each other to avoid duplication.

Minister for Climate Change Zartaj Gul apprised the cabinet about the concept of using solar stoves in hilly areas and the prime minister directed that the proposal should be executed.

Dr Firdous said the media would be made part of the campaign ‘Plant for Pakistan’. The youth will be provided fruit trees so that they can become financially independent by growing orchards, she added.

She said the prime minister directed that proposals of information technology and energy ministries should be turned into projects. The cabinet was informed about upgrading of electricity system and repair of transformers by the public utility companies to save money. She said the government will bear expenses of those who became victim in electricity accidents.

The cabinet decided to give easy loans to the people of Northern Areas for building of an extra room adjacent to their houses so that they can rent it out to the tourists and earn extra income.

The special assistant said the energy ministry was in the process to install electronic meters for reducing electricity theft.

She said the Kashmiri diaspora wants to build schools and hospitals in their respective hometowns provided that they are given waiver in taxes and duties. Minister for Inter-Provincial Coordination Dr Fehmida Mirza briefed the cabinet on the steps taken for increased coordination of Pakistan Sports Board with the provinces as after devolution, there was lack of coordination among the provinces regarding sports activities. She also informed the cabinet about the measures for revival of Islamabad Sports Complex, especially for sportswomen.

For low cost housing, she said the cabinet approved a fund of Rs 5 billion for provision of interest-free loans to low income people in a fair and transparent procedure. The loans will be distributed according to the data collected from the provinces, she added.

Dr Firdous said approval of the Christian Marriage and Divorce Bill as per the religious norms of the Christian community is another achievement of the PTI government. The Domestic Violence Prevention Bill was approved after improving it further in line with religious and social and cultural values of the society, she added.

The cabinet, she said, approved constitution of National Information Technology Board so that it can reform and restructure the IT services according to best regional and international practices. She said the cabinet was informed that the Ministry of Communications has registered over 52 per cent increase in its annual revenue during the first year of PTI government.

Minister for Communications Murad Saeed told the meeting that his ministry generated a record revenue of Rs 43.32 billion during the financial year 2018-19 as compared to Rs 28.64 billion in the fiscal year 2017-18 which showed Rs 14.92 billion increase. The ministry has so far recovered Rs 7 billion through audit, which have been deposited to the national kitty. A new system containing facilities such as e-billing, e-tendering, and mobile apps has been introduced by the ministry to enhance transparency.

Dr Firdous said the cabinet was told that a driving licensing authority will sign memorandums of understanding with the Middle Eastern countries so that Pakistani drivers will not have to apply for driving license there.

The cabinet discussed the procedural challenges in the working of National Accountability Bureau that can deter businessmen from taking decisions. To a question, she said funds will be released in the last week of August and the ministries will start initiating their new projects having an impact on public welfare.

She said the continuity of Chief of Army Staff General Qamar Javed Bajwa for the next three years is the right step. His tenure was extended in view of the regional situation, Afghan dialogue process, and his personal engagements and credibility, she added.

She said the army chief led Zarb-e-Azb and Rudd ul Fasaad operations, and played an important role in empowerment of the parliament and strengthening of democracy. “When the nations are in a state of war, then the commanders are not changed,” she remarked.