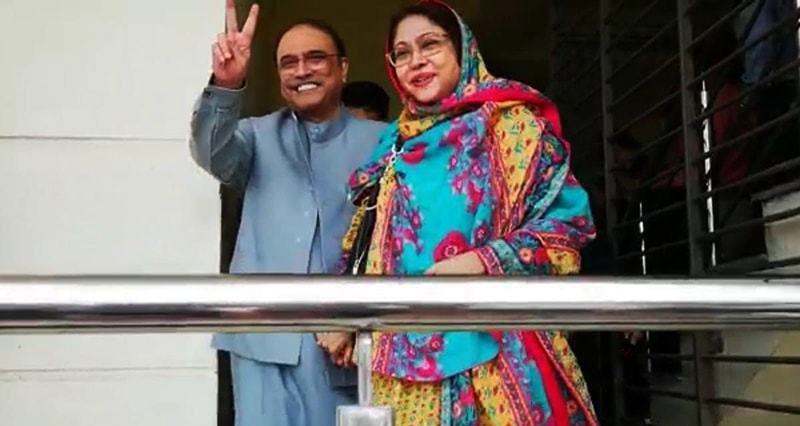 An accountability court in Islamabad on Tuesday turned down a request for A-class facilities in jail by former president Asif Ali Zardari and his sister Faryal Talpur, who have been arrested in the fake bank accounts case, a private TV channel reported.

Farooq H Naek and Advocate Sardar Latif Khosa appeared in the court of judge Mohammad Bashir, who conducted the hearing over Zardari and Talpur’s request for A-class facilities in jail. The lawyers also requested the court to grant transit remand to Faryal Talpur so that she can attend the Sindh Assembly session.

The National Accountability Bureau (NAB), however, opposed the requests.

The court turned down the request for A-class facilities. However, it allowed them to avail the use of an air conditioner, refrigerator, television, radio, iPad, cooker, kettle, toaster, torch, and other additional facilities as well as keep an attendant at their own expense.

The court directed the lawyers to approach the Inspector General Prisons for transit remand of Faryal Talpur.

Meanwhile, NAB Deputy Prosecutor Sardar Muzaffar Abbasi apprised the judge that the anti-corruption watchdog has decided to file a supplementary reference against Zardari and Talpur in the money laundering case in light of the new evidence found during the investigation.

Khosa had argued during Friday’s hearing that his client had been given A-class facilities in jail even before he became the president of Pakistan. He said the former president had turned old and had been suffering from multiple diseases, yet the jail authorities were not providing him proper care.

The matter had been adjourned until Tuesday and Zardari and Talpur were exempted from personal appearance.

Besides the appliances, approval was also granted for a personal attendant. An application had also been submitted by Talpur seeking permission to participate in the Sindh Assembly session. The court asked the counsels to approach the inspector general of prisons in this regard for transit remand.

The judicial remand for both Zardari and Talpur has been extended till September 5.

The Federal Investigation Agency had named Zardari, his sibling Talpur, Omni Group Chairman Anwar Majeed, his sons and over 10 others as suspects in an interim charge sheet filed in a banking court in August last year. The case was transferred from the banking court in Karachi to the accountability court of Rawalpindi for trial in March.