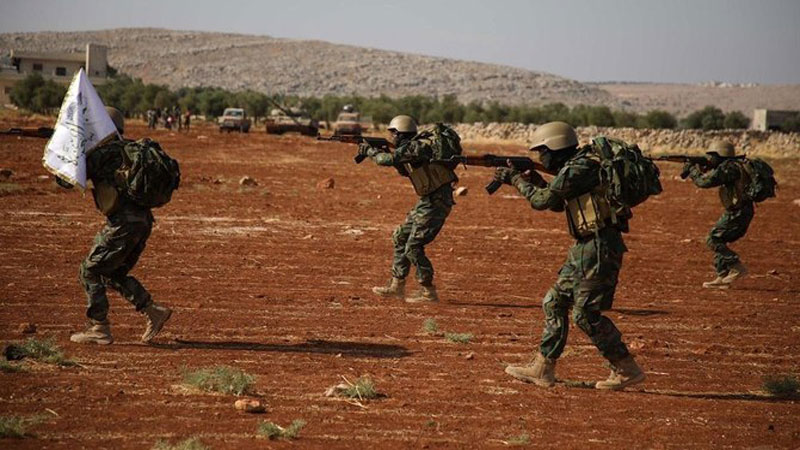 Jihadists and allied rebels withdrew from a key area of northwestern Syria Tuesday as President Bashar Assad’s forces pressed an offensive against the jihadist-run Idlib region, a war monitor said.

The fighters pulled back from the town of Khan Sheikun and the countryside to its south overnight and in the early hours of Tuesday, the Syrian Observatory for Human Rights said.

On Monday, a Turkish military convoy crossed the border into the Idlib region, sparking condemnation from Damascus as Ankara alleged air strikes had targeted its troops.

The convoy halted just north of Khan Sheikhun on Monday afternoon and remained there on Tuesday, after government forces took control of a section of the highway into the town.

“The Syrian army in its own way sent a clear message to the Turkish regime by forcing convoys sent by Ankara to help the terrorists in Khan Sheikhun to come to a halt,” it said.

It was a “clear warning against any Turkish attempt to resuscitate the terrorists,” the paper said, adding that the strike had “Russian support.”

After eight years of civil war, the Idlib region on the border with Turkey is the last major stronghold of opposition to President Bashar Assad’s regime.

Since January, it has been administered by the Hayat Tahrir Al-Sham alliance, which is led by jihadists from Syria’s former Al-Qaeda affiliate.

The region of some three million people was supposed to be protected by a Turkish-Russian buffer zone deal signed last year.

But government and Russian forces have subjected it to heavy bombardment since late April, killing more than 860 civilians, according to an Observatory toll.

The United Nations says the shelling and air strikes have also hit dozens of health facilities and caused more than 400,000 people to flee their homes.

The war in Syria has killed more than 370,000 people since the rebels first took arms following the brutal repression of anti-government protests in 2011.

Rival interventions by outside powers have turned it into a complex conflict with multiple battle fronts that has driven millions of civilians from their homes.