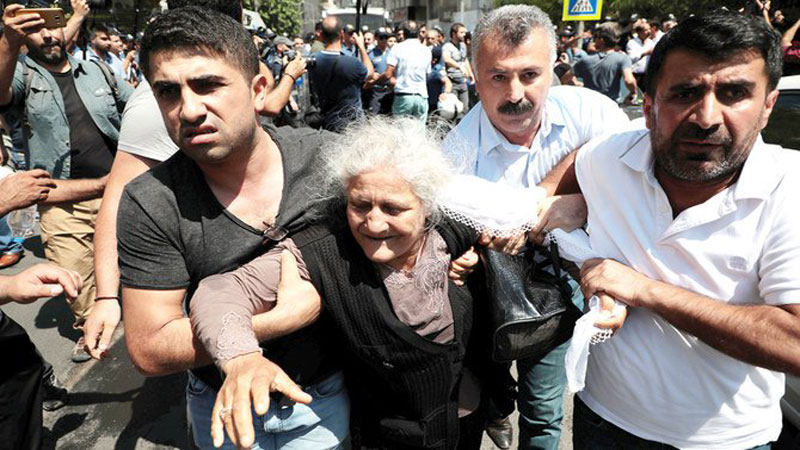 The Turkish government removed three mayors from office on Monday over alleged links to Kurdish militants as Ankara deepened its crackdown on the opposition.

The mayors of Diyarbakir, Mardin and Van provinces in eastern Turkey — all members of the pro-Kurdish Peoples’ Democratic Party (HDP) elected in March — were suspended over alleged ties to the outlawed Kurdistan Workers’ Party (PKK).

A simultaneous crackdown across 29 provinces saw hundreds arrested, in a sign that President Recep Tayyip Erdogan’s government has no intention of easing up on its hard line despite recent electoral setbacks.

Police intervened with water cannons as hundreds of people gathered outside Diyarbakir’s municipality to denounce the government’s actions.

The Interior Ministry said the suspended mayors had active cases against them for “spreading propaganda” or being a member of a terrorist organization, and would be replaced by the centrally appointed governors of their provinces.

It accused them of attending funerals and visiting graves of “terrorists,” renaming streets and parks after imprisoned PKK members, and offering jobs to militants’ relatives.

The HDP denies ties to the PKK, which has fought a bloody insurgency against the Turkish state for much of the past 35 years.

Diyarbakir Mayor Selcuk Mizrakli told reporters outside municipal headquarters that the move “disregards the will of the people.”

The government launched a crackdown on opposition politicians as well as the public sector, media and civil society following a failed coup in July 2016.

Although the coup was not directly linked to the Kurdish issue, the crackdown saw 95 of 102 pro-Kurdish mayors removed from their posts and replaced with central government appointees.

Many were allowed to stand again in the March elections, despite criminal cases against them.

Hundreds of HDP members and around 40 of its mayors are currently in detention.

The former head of the party, Selahattin Demirtas, has been in prison since November 2016 — a case that has been criticized by the European Court of Human Rights.

In April, Turkish election officials annulled results in five districts and towns after they were won by people who had been removed from their posts under the two-year state of emergency that followed the attempted coup.

HDP lawmaker Garo Paylan responded to Monday’s suspensions by calling on all parties and the public to oppose what he called a “vile coup.”