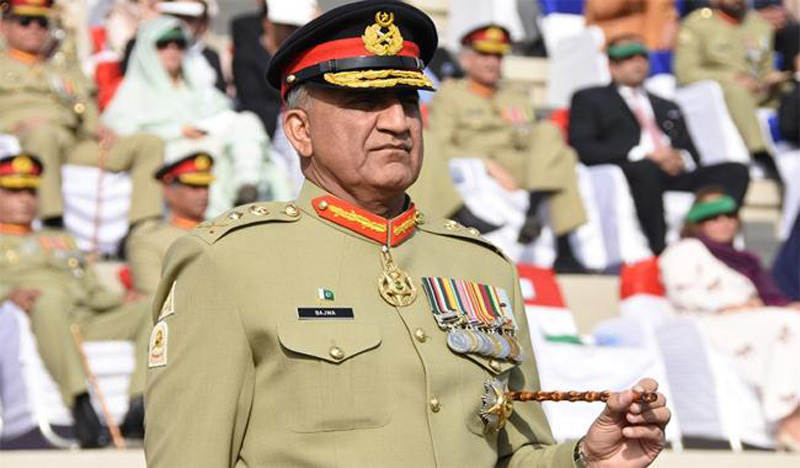 Prime Minister Imran Khan on Monday approved an extension in the tenure of Chief of Army Staff (COAS) General Qamar Javed Bajwa for another three years, a statement issued by the premier’s office said on Monday. The announcement comes nearly three months before Gen Bajwa was due to retire.

“General Qamar Javed Bajwa is appointed Chief of Army Staff for another term of three years from the date of completion of current tenure,” read the brief notification issued by the prime minister’s office.

It added that the “decision has been taken in view of the regional security environment”. The notification was personally signed by Prime Minister Imran Khan.

Gen Bajwa was appointed as the chief of army staff by former prime minister Nawaz Sharif in November 2016.

His extension marks the second time in nearly a decade that the country’s top general had their traditional three-year term extended.

Imran’s first year in office has been characterised by a rare harmony in the traditionally fraught relationship between the country’s civilian and military leaderships, with Gen Bajwa last month defending the tough economic measures taken by the PTI government as “difficult but extremely essential”.

The announcement of the army chief’s tenure extension comes amidst critical developments on Pakistan’s eastern and western frontiers.

Tensions between Pakistan and Indian flared this month after New Delhi decided to strip Indian-held Kashmir (IHK) of its special constitutional status and imposed a crippling curfew in the territory that has continued for weeks. Islamabad angrily slammed the decision, taking the matter to the United Nations Security Council and expelling India’s ambassador and suspending bilateral trade.

Relations between the two countries had already been strained after a suicide car bombing in February that killed at least 40 Indian paramilitary police in IHK led to an aerial dogfight between Pakistani and Indian jets.

The country observed a ‘Black Day’ on Thursday to coincide with India’s Independence Day celebrations, in solidarity with the people of occupied Kashmir.

The decision also comes as Pakistan is playing a key role in ongoing peace talks between the US and Afghan Taliban that aim to secure a withdrawal of American troops in exchange for insurgent promises that Afghanistan will not be used as a safe haven for groups such as al Qaeda or the Islamic State. Talking to a private news channel, analysts termed the development “positive” in view of the existing geopolitical situation, which has been defined by rising hostilities in IHK and progress in the Afghan peace process, which stands at a critical stage.

“You are aware of the situation in Kashmir, the security situation in the region, and where our efforts are for the peace process in Afghanistan. Looking at the entire situation, the prime minister using his constitutional authority has decided to appoint Gen Qamar Javed Bajwa as the chief of army staff for another three years,” Qureshi told reporters in Islamabad.

The foreign minister said a clear message was being conveyed to India that there was “continuation and clarity” in the political and military leadership in Pakistan.

“At this stage we are not completely aware of the entire situation in IHK as there is curfew in the region. When the curfew is lifted, we will know what exactly happened there,” said the foreign minister when asked if any improvement was expected in IHK and Afghanistan following the decision.

He said that, according to some international media reports, there were some skirmishes in IHK even on Saturday.

Qureshi pointed to irresponsible statements from India’s defence minister. “You should not have any doubts over their aims and intentions,” he said.

“A very clear message (is being conveyed) that Pakistan’s political and military leadership are not only ready, they are on one page. This was very important,” said the foreign minister.

He has been an instructor at the School of Infantry and Tactics, Quetta; Command and Staff College, Quetta; and NDU. He has also served as the brigade major of an infantry brigade and Chief of Staff of Rawalpindi Corps.

He has commanded 16 Baloch Regiment, an infantry brigade, and infantry division in Northern Areas Commander FCNA. He has also commanded the Pakistan contingent in Congo.