Opp to hold APC on Aug 29 over Islamabad lockdown

* Firdous says Fazl should not do politics, dent national unity on Kashmir 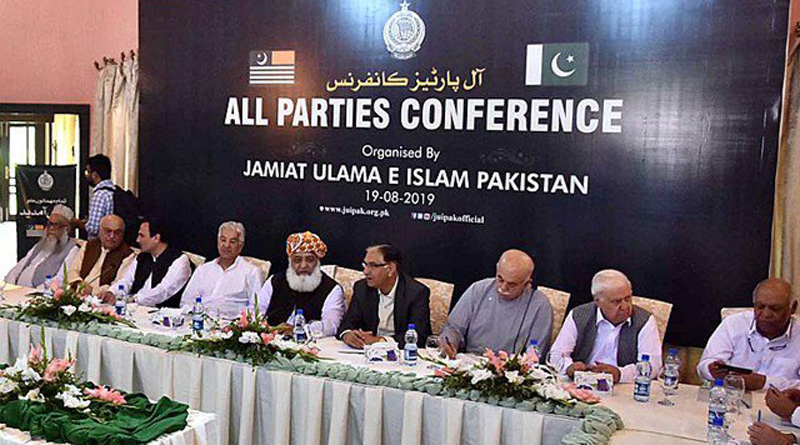 The opposition parties announced late Monday their decision to hold another All Parties Conference (APC) on August 29 to mull over the lockdown of the federal capital.

Jamiat Ulema Islam-Fazl (JUI-F) chief Maulana Fazlur Rehman said it was agreed in the APC held earlier on Monday that all opposition leaders would travel to Islamabad together.

The opposition’s Rahbar Committee, he added, would send a charter of demands in a week so as to have a list on which everyone agreed upon. The JUI-F chief further said there would be a meeting of the Rahbar Committee on August 26 as well.

The opposition was starting to move against the government, Fazl said, urging the nation to support them. “People will come to our lockdown… no one can remove them. Our people will not come to enjoy, and will bear every challenge.”

Earlier in the day, the opposition parties held an APC to deliberate on the situation in Indian-held Kashmir (IHK) and the country’s political situation. The meeting was chaired by Fazl and attended by top leaders from the Pakistan People’s Party (PPP) and the Pakistan Muslim League-Nawaz (PML-N).

Speaking on the occasion, Fazl said the incumbent government had set the worst example of bad governance during its one-year tenure, which led to the prevailing situation, as the country was facing economic problems and security issues. He held the incumbent government responsible for the situation in Kashmir and instability on the Line of Control, and added that the government didn’t consider the Kashmir issue serious.

He further stated that every countryman was upset due to anti-people policies of the government. “Price hike has made the life of the common man miserable, youth are worried due to unemployment, while the business community is agonised due to huge taxes imposed on it,” he stated. He said there was a lack of national solidarity, which was a major hurdle in resolution of the problems faced by the country and its people.

Meanwhile, terming the three-year-extension in tenure of Chief of Army Staff (COAS) General Qamar Javed Bajwa as a “usual decision”, the APC members said that the decision should not be looked from the political point of view, as extension in tenures of government employees was a routine matter.

Opposition Leader in the National Assembly Shehbaz Sharif and PPP Chairman Bilawal Bhutto Zardari were unable to attend the meeting. However, Bilawal and the JUI-F chief met last night to discuss the agenda of the APC.

Meanwhile, Special Assistant to Prime Minister (SAPM) on Information and Broadcasting Dr Firdous Ashiq Awan on Monday said Maulana Fazlur Rehman should not jeopardise national unity by doing politics on the Kashmir cause.

Fazl had been rejected by the people politically and he should not take revenge of that by politicking on the Kashmir issue, which was the common cause of the entire nation, she said in a tweet.

Firdous said it seemed that Fazl had shut his mouth like the curfew imposed by Narendra Modi on the occupied valley, as he was not raising voice for the innocent Kashmiris (living in complete lockdown). Instead of speaking against the Indian prime minister and in total disregard of national interests, he was unleashing venomous criticism against the country, she added.

She said Fazl had enjoyed protocol as chairman of the National Assembly’s Kashmir Committee for years and he should inform about his performance on that count. How much efforts he had made for the Kashmiris’ freedom, she asked.