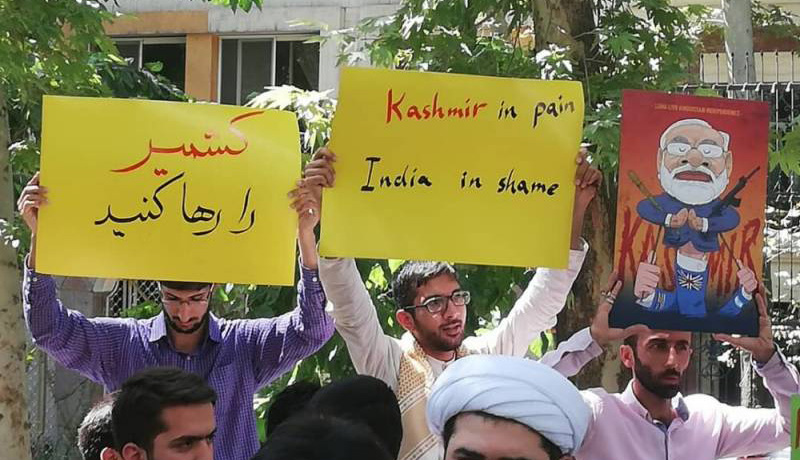 A large number of Pakistanis, Kashmiris and Iranians protested in front of United Nations office in Tehran on Sunday against recent act of Indian government of abrogation of articles 370 and 35-A of the Indian constitution and repression against Kashmiris.

The protesters denounced the revocation of special status of Kashmir, relocation of non-Muslims to the region and inhuman military crackdown on innocent Kashmiris as a clear violation of human rights, calling on the international community to address the issue.

On August 5, India, through a presidential decree, revoked the special autonomy of the disputed territory to fully integrate the state with the rest of the country. The move sparked protests across Pakistan, while the entire region of Indian-held Kashmir (IHK) was locked down.

In the lead-up to the move, India sent thousands of additional troops to the disputed region, imposing a curfew on parts of it, arrested political leaders and shut down telecommunication lines.

Iran has called on the Indian government to reduce the tough security measures in Kashmir, which have put restrictions on people’s lives.

On August 13, Iranian Foreign Ministry Spokesman Seyyed Abbas Mousavi expressed the Islamic republic’s deep concerns over the ongoing situation in the Muslim-majority Kashmir and the restrictions imposed on the region’s people.

He called on the Indian authorities to adopt practical approaches so that the life in the region could return to normal, and Kashmiris could enjoy their “natural and recognised rights”.