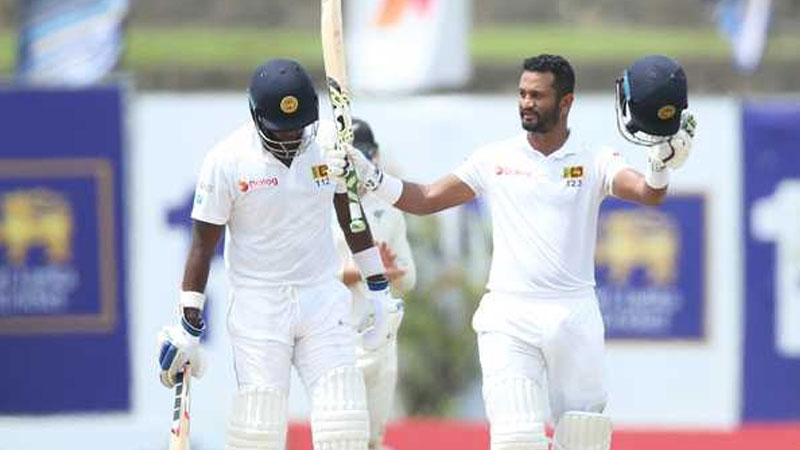 A ninth test century from captain Dimuth Karunaratne propelled Sri Lanka to a six-wicket win over New Zealand in the first cricket test on Sunday.

Chasing 268 runs to win the first test of a two-match series, Sri Lanka started the final day at 133 without loss and reached its target during an extended first session after Karunaratne and Lahiru Thirimanne laid a solid platform for the victory with a 161-run partnership for the opening wicket. New Zealand off spinner William Somerville finally ended the partnership after four hours and 362 deliveries trapping Thirimanne lbw for 64, the opener’s first half-century in 12 innings. Kusal Mendis hit a six and a boundary before being caught by Jeet Raval at mid-wicket off left-arm spinner Ajaz Patel for 10 to have Sri Lanka at 174-2, still requiring 94 runs for victory.

Karunaratne brought up his deserved century with a boundary to long-on in the 66th over before was out for 122, caught by wicketkeeper B.J Watling off seamer Tim Southee 11 overs later. The captain spent more than five hours at the crease, faced 243 balls and hit six boundaries and a six in his match winning performance.

Kusal Perera (23) was out with victory in sight caught by Mitchell Santner off fast bowler Trent Boult.

Veteran Angelo Mathews scored the winning run and was unbeaten on 28 with Dhananjaya de Silva 14 not out as the hosts brought up a historic victory at a venue where the previous highest fourth innings winning total stood at just 99 runs.

On Saturday’s fourth day, New Zealand was bowled out for 285 runs in its second innings after left-arm spinner Lasith Embuldeniya took 4-99 while de Silva had 3-25. The second match will be played at P.Sara Oval in Colombo from Aug.22.