Peace with whom? After blast, enraged Afghans question talks 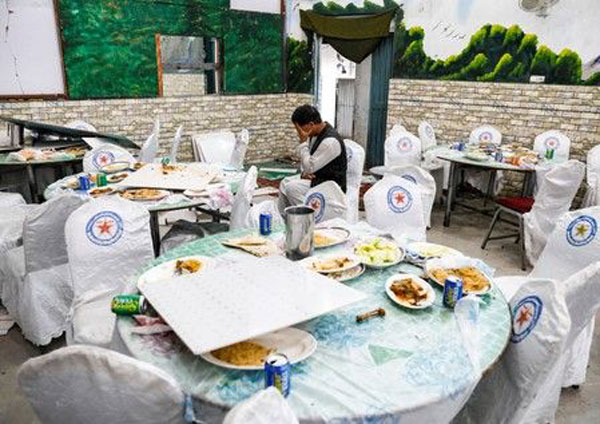 Outraged Afghans questioned on Sunday the point of negotiations with the Taliban aimed at getting US troops to leave and ending the war, after 63 people were killed in a suicide bomb attack on a wedding reception in the capital, Kabul.

A suicide bomber blew himself up late on Saturday in a packed wedding hall, bringing new carnage to a country plagued by decades of violence. Many women and children were among the dead and 182 wounded, officials said.

“Peace with whom? With those who bomb our weddings, schools, universities, offices and houses?” Twitter user Rada Akba wrote on the social media platform.

“Selling out this land and its people to those killers is sick and inhuman. History won’t forget this,” she wrote.

The Taliban denied responsibility for the blast at a west Kabul wedding hall in a minority Shi’ite neighbourhood, and condemned it.

Islamic State militants also operate in Afghanistan and have carried out bloody attacks in towns and cities, some against Shi’ites. Journalist Sana Safi said she doubted the Taliban denial.

“Who else is capable of carrying out such brutality?” she asked.

“So ‘peace agreement’ with the Taliban isn’t going to end the bloodshed for ordinary Afghans?”

Tawab Ghorzang, an adviser at the ministry of transport, said negotiations with the Taliban gave them legitimacy.

“If thousands of times the Taliban are given legitimacy on the platform of peace talks, their war crimes and crime against the humanity will go on,” he wrote on Facebook.

The Taliban and the United States are trying to negotiate an agreement on the withdrawal of US forces in exchange for a Taliban commitment on security and peace talks with Afghanistan’s US-backed government. Both sides have reported progress after eight rounds of talks since late last year.

Under the expected deal on a staggered withdrawal of US troops, the Taliban would guarantee Afghanistan would not be a sanctuary for militants to expand and plot new attacks, both sides have said.

The government has not been involved in the negotiations – the Taliban refuse to talk to administration they see as a US puppet – but the militants are expected to make a commitment to open power-sharing talks and agree to a ceasefire.

The government insists a ceasefire must be part of any deal.

Tabish Forugh, an Afghan journalist, also questioned the Taliban denial of responsibility for the Saturday’s blast.