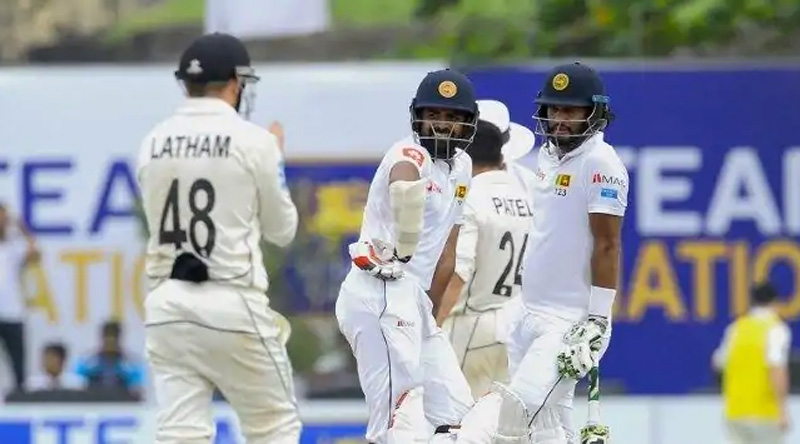 Captain Dimuth Karunaratne and Lahiru Thirimanne scored half-centuries Saturday to put Sri Lanka in a strong position in the first test against New Zealand, reaching 133-0 in its second innings at stumps on Day 4.

Chasing 268 runs to win, Sri Lanka needs 135 more runs on the final day after its impressive start to an unlikely run chase. The fourth innings winning total at Galle stands at only 99.

Karunaratne was on 71, his 23rd test half-century, when play was stopped early in the final session for bad light with 13 more overs left. He faced 168 deliveries and hit only two boundaries. Thirimanne scored his first half-century in 12 innings and remained unbeaten on 57 with four boundaries.

The New Zealand spin bowlers could not get the expected benefits from the Galle pitch, despite bowling 39 out of 50 overs in the innings.

The Black Caps were earlier bowled out for 285 in their second innings after struggling on 124-6. Their lower order rallied around B.J Watling to rescue the team from a precarious position.

New Zealand’s tail-enders then put on 36 and 25 runs for the ninth and 10th wickets, respectively, in an impressive show of defiance.

The match started 50 minutes late on the fourth day because of a wet outfield.

Watling was out for 77 on the fourth morning after Sri Lanka called up Lahiru Kumara to bowl, and the batsman edged an outswinger to wicketkeeper Niroshan Dickwella.

Trent Boult made a useful 26 while Somerville remained unbeaten on 40, his highest first class score.