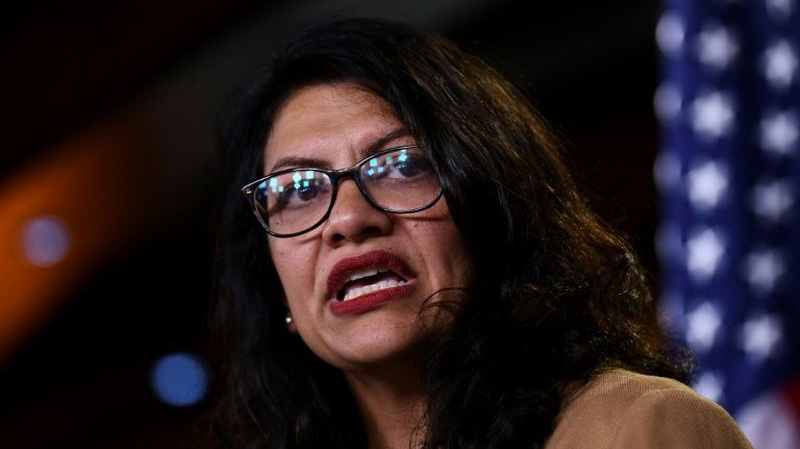 Palestinian-American lawmaker Rashida Tlaib on Friday turned down Israel’s offer to let her visit her grandmother in the occupied West Bank, owing to restrictions she termed oppressive.

It was the latest twist in a saga hinging on Israel’s war against those who would boycott it over its treatment of the Palestinians.

On Thursday, Israel barred from entry the US Congress’ first Muslim female lawmakers, Tlaib and Ilhan Omar, on the grounds that they support the boycott movement, and after President Donald Trump urged the Jewish state to block the two Democrats.

But it held out the carrot of allowing Tlaib to make a private visit to her elderly grandmother, if she agreed to abide by conditions including a pledge not to advocate boycotting Israel. “This could be my last opportunity to see her. I will respect any restrictions and will not promote boycotts against Israel during my visit,” she initially wrote. On Friday, Israel’s Interior Minister Aryeh Deri announced that she would be permitted a “humanitarian visit”, but a few hours later Tlaib announced a change of heart.

“I have decided that visiting my grandmother under these oppressive conditions stands against everything I believe in — fighting against racism, oppression & injustice,” she wrote in a series of tweets.

“When I won, it gave the Palestinian people hope that someone will finally speak the truth about the inhumane conditions,” added the 43-year-old congresswoman, elected in January. “I can’t allow the State of Israel to take away that light by humiliating me & use my love for my sity to bow down to their oppressive & racist policies,” she said, referring to her grandmother. “Silencing me & treating me like a criminal is not what she wants for me. It would kill a piece of me.” On Friday, Palestinian activists had been urging Tlaib on social media not to visit her grandmother under the Israeli terms. Trump weighed in late Friday, calling Tlaib’s turnaround “a complete setup.” “Rep. Tlaib wrote a letter to Israeli officials desperately wanting to visit her grandmother. Permission was quickly granted, whereupon Tlaib obnoxiously turned the approval down, a complete setup.”

He added: “The only real winner here is Tlaib’s grandmother. She doesn’t have to see her now!” In the family’s village of Beit Ur Al-Foqa, Muftia Tlaib had been excitedly awaiting her granddaughter’s arrival.

She intended to slaughter a sheep in her honour, in accordance with custom.

“I see her coming to the village in traditional (Palestinian) dress,” she told AFP on Thursday, before the latest development.

The United States, particularly under Trump, is Israel’s strongest ally. But the two congresswomen are seen by many as enemies of Israel because of their support for the Boycott, Divestment and Sanctions (BDS) movement. Israel sees the movement as a strategic threat and accuses it of anti-Semitism — a claim activists deny — and in 2017 passed a law banning entry to foreigners supporting a boycott. Israel occupied the West Bank and east Jerusalem in the 1967 Six-Day War and has for decades built settlements considered illegal under international law.

Settlement growth has accelerated under Prime Minister Benjamin Netanyahu, a close Trump ally who is seeking re-election next month. More than 600,000 Israelis live in the settlements, alongside nearly three million Palestinians, in uneasy proximity throughout the West Bank and occupied east Jerusalem.

Israel’s initial refusal to allow Tlaib and Omar to transit the Jewish state on their way to the West Bank sparked outrage among Palestinians and debate about the intimate ties between Netanyahu and Trump.

Despite fierce criticism of Tlaib and BDS on the Israeli side, the country’s media largely slammed Netanyahu over the affair.

The premier was accused of putting loyalty to Trump and the Republican Party ahead of Israel’s clear interest in maintaining bipartisan US support. “After countless zigzags between what is right for Israel and what is right for Trump, Netanyahu chose Trump,” analyst Shimrit Meir wrote in the top-selling Israeli daily Yediot Aharonot. The affair could cause US Democrats to rally around the two Muslim congresswomen, commentators said, in a way which could prove detrimental to Israel.

Ben Caspit, a journalist with the Maariv newspaper, said Thursday’s decision to block the politicians’ entry “set new records for shortsightedness and wretchedness”. “It will turn them into martyrs, it will turn Israel into a threshold dictatorship lacking self-confidence that is closed onto itself, that bans elected American officials, critical as they may be,” he said.