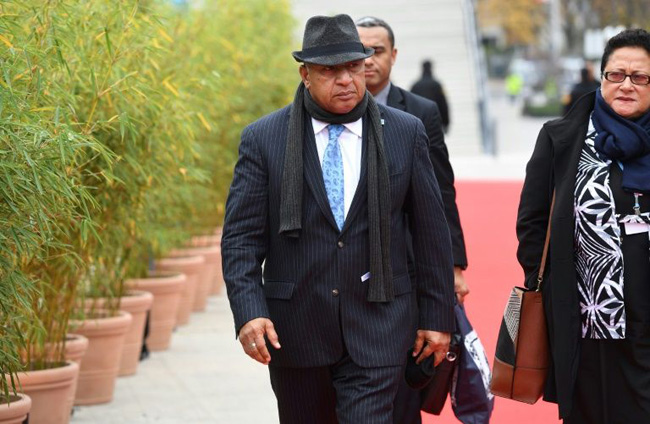 Bainimarama accused Morrison of heavy-handed tactics after the Pacific Island Forum wrapped up in Tuvalu Thursday with pro-coal Canberra sharply at odds with island nations facing the existential threat of climate change.

“The prime minister (Morrison) was very insulting, very condescending, not good for the relationship,” Bainimarama told the Guardian late Friday.

The group had hoped to issue a compelling global call to action from nations on the frontline of climate change ahead of UN talks in New York next month.

But after 12 hours of negotiations that descended into tears and shouting, the summit communique fell well short of expectations with language watered down at the insistence of the Australian PM, island leaders said.

Morrison pledged Aus$500 million in aid to Pacific Island nations to invest in renewable energy and climate change resilience, part of a strategy to counter China’s rising influence in the region.

But leaders of the other 17 nations in the Pacific Island Forum have called on Canberra to do more to cut emissions and curb Australia’s lucrative coal industry.

“(Morrison) at one stage, because he was apparently [backed] into a corner by the leaders, came up with how much money Australia have been giving to the Pacific,” Bainimarama said. “Very insulting.” The Fijian leader added there was “no competition” in the region between Australia and China, but commended Beijing’s approach to diplomacy.

“They don’t go down and tell the world that we’ve given this much money to the Pacific islands. They don’t do that. They’re good people, definitely better than Morrison, I can tell you that,” he said.