* Pakistan says it stands ready for a peaceful settlement of dispute
* China says issue should be resolved through peaceful means as per UN charter, relevant SC resolutions and bilateral agreements 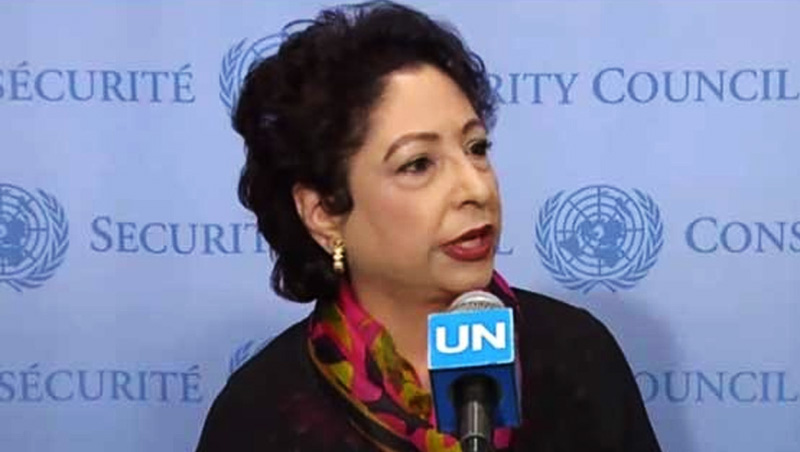 The United Nations Security Council (UNSC) on Friday expressed serious concerns regarding the human rights situation in Indian-held Kashmir, and urged the parties concerned to refrain from taking any unilateral action that may further aggravate the tension in the occupied valley.

The members met for the first time in over five decades over the issue of Kashmir at the request of China and Pakistan to discuss the Indian government’s recent decision to revoke the special status of the occupied valley and the dangerous situation arising out of the move.

“The voice of the Kashmiri people has been heard. The fact that this meeting took place is testimony to the fact that this is an internationally recognised dispute. This meeting has reaffirmed the validity of the UNSC resolutions on the status of Jammu and Kashmir,” Pakistan’s Permanent Representative to the United Nations Maleeha Lodhi told reporters after the meeting. “I think this meeting nullifies that Jammu and Kashmir is an internal matter for India,” she maintained. “The people of Jammu and Kashmir may be locked up and their voices not heard in their own homes and their own land, but their voices were heard at the meeting of the UNSC,” she said. “They are not alone, their voices have been heard, their plight, their hardship, their pain, their suffering, their occupation and the consequences of that occupation has been heard in the UNSC,” she added.

Ambassador Lodhi said the meeting had been called within 72 hours after Foreign Minister Shah Mahmood Qureshi had written a letter requesting the same. “We are grateful to China in also joining us in calling this meeting,” she said, adding that “there was an effort to stop this meeting from convening but it took place thanks to all 15 members who agreed to hold it.”

Lodhi underscored the fact that Pakistan stands ready for a peaceful settlement of the dispute of Jammu and Kashmir. She emphasised that India’s claim that the issue is an ‘internal matter’ stands nullified following the meeting. “Today the whole world is discussing the occupied state and the situation there,” she said, also referring to the Chinese ambassador’s remarks on the human rights situation in Kashmir. “It is an abysmal situation, with violence carried out with impunity by India. That, too, has been discussed by the Security Council,” she disclosed.

“This is the first and not the last step. It will not end here. It will only end when justice is done to the people of Jammu and Kashmir,” she stressed, and went on to reiterate that the voices of the people of Kashmir will always be heard. “Pakistan will always stand by them, extending full diplomatic and political support,” she pledged, and concluded by thanking the Security Council for taking up the issue for the first time in over 50 years.

Speaking to reporters after the UNSC meeting, Chinese Ambassador to the United Nations Zhang Jun said members of the Security Council feel serious concern regarding the human rights situation in Indian-held Jammu and Kashmir, and that parties to the dispute should refrain from unilateral action that may aggravate the situation. “UN Security Council members believe India and Pakistan should refrain from taking unilateral action over the disputed region of Jammu and Kashmir,” Zhang said while summing up the discussions. “They are also concerned about the human rights situation there and also it’s the general view of members that parties concerned should refrain from taking any unilateral action that might further aggravate the tension there since the situation is already very tense and very dangerous,” he added.

Zhang said “it’s obvious that the constitutional amendment by India has changed the status quo in Kashmir, causing tensions in the region”. “China holds the view that the issue of Jammu Kashmir is an issue left from history between India and Pakistan. According to UNSC resolutions, the status of Kashmir is undecided and it is an internationally recognized dispute. The Kashmir issue should be resolved properly through peaceful means in accordance with the UN charter, the relevant SC resolutions and bilateral agreements. This represents the international community’s consensus,” he said.

India’s UN Ambassador Syed Akbaruddin accused Zhang of trying to pass off his remarks as ‘the will of the international community’. He said India’s decision is an internal matter. “If there are issues, they will be discussed, they will be addressed by our courts; we don’t need international busybodies to try and tell us how to run our lives. We are a billion-plus people,” Akbaruddin told reporters after the meeting.