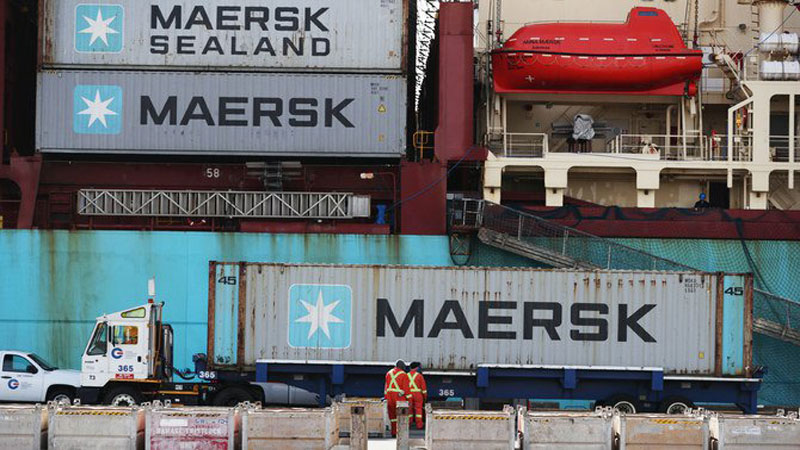 Maersk said the escalating trade dispute between Washington and Beijing could limit growth in global container traffic. A.P. Moller-Maersk warned a trade war between the US and China could curb container traffic this year after the world’s largest container shipping company beat second-quarter profit expectations.

Maersk said the escalating trade dispute between Washington and Beijing could limit growth in global container traffic to the lower end of its 1 to 3 percent guidance range this year, after growth of about 2 percent between April and June.

Newly imposed tariffs between the US and China combined with additional US tariffs due to be implemented later this year could remove up to 1.5 percent of global container demand in 2020, Maersk said.

“It is not tariffs that decide how many goods are being transported, but rather how much Americans buy when they go to Walmart. Luckily for us, the US consumer is still in a good mood,” Skou told a media briefing.

He said that Maersk had seen “solid progress” in the second quarter, including realizing synergies of $1 billion from restructuring earlier than expected.

Earnings before interest, tax, depreciation and amortization (EBITDA) grew 17 percent to $1.36 billion, topping the $1.24 billion forecast by analysts in a Reuters poll.

Maersk benefited from higher container freight rates, larger volumes and lower costs and said it still expects EBITDA for the full year to total $5 billion. Analysts on average expect EBITDA of $5.4 billion for 2019.

“The results were good, but in a market where concerns over the global economy are escalating, investors are not going to reward a cyclical stock like Maersk,” said Frans Hoyer, analyst at Handelsbanken.

Some investors may have been disappointed that Maersk did not raise its full-year guidance despite a good result for the first six months.

“It looks like consensus was running ahead and some had seen Maersk’s guidance as conservative,” Hoyer said. “But I think it would be crazy to lift guidance in this environment,” he said. Skou said that he was planning for low growth in container shipping demand this year and next, but not recession. “Some expect a recession in the United States. We doubt it will happen this year or next,” Skou said. “We wake every morning to new tweets from the US president. Now tariffs have been canceled on all the consumer goods that will be in demand during Christmas shopping. Those are the goods we ship, so now we’re a bit more optimistic,” he said. Skou has overseen a major shift in Maersk’s strategy, which has included selling off its oil and gas business to focus on the container and logistics business for customers that include Walmart and Nike.