Don’t even think about it, PM Imran tells India

* Premier says Delhi has made a more sinister plan to shift the world's focus away from atrocities in IHK
* Says world powers and international bodies will be responsible if a war breaks out in the region, as they have failed to implement UN resolutions on Kashmir
* Says he will be ambassador of Kashmiri people at global level 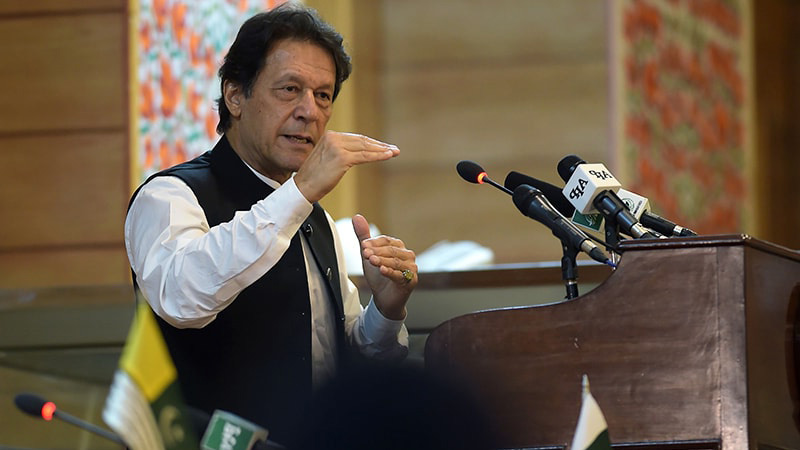 Prime Minister Imran Khan on Wednesday revealed that India is now planning to attack Azad Jammu and Kashmir (AJK) to divert the global attention from Indian-held Kashmir (IHK) which remains in lockdown since New Delhi scrapped Article 370 of the Indian constitution.

“This will not stop at Kashmir. This hate-filled ideology will come towards Pakistan,” he said while addressing the AJK Legislative Assembly in solidarity with the Kashmiri people on the eve of Pakistan’s Independence Day.

“We have intelligence and we have had two National Security Committee meetings. Pakistan Army has full knowledge that India has drawn up a plan to take [military] action in AJK,” Imran said in his speech.

“Like the action they took in Balakot after Pulwama, according to our information, they have made a more sinister plan now,” he said. “To shift the world focus away from Occupied Kashmir, they want to take action in AJK.”

However, the prime minister warned Modi against any such misadventure, promising a painful reprisal for any action. “We will respond and the whole nation would stand behind the battle-hardened Pakistan Army,” he added. “Aggressive war is against Islam, but when Muslims have fought to protect their freedom, they have defeated much bigger armies.”

The premier said Muslims have never bowed and would never bow their heads before anybody except Allah. In the same vein, Imran hit out at the international community for its failure to resolve the festering dispute which has become a nuclear flashpoint in the world.

“If war breaks out in the region, the world powers and international bodies will be responsible, as they have failed to implement the UN resolutions on Kashmir,” he said. “The United Nations must listen to 1.5 billion Muslims who are looking up to the global body for action against India, which has turned IHK into a prison for 10 million Kashmiris.”

The prime minister promised to knock at the door of every global forum, including the International Court of Justice, to get support for a permanent settlement of the Kashmir dispute. Modi’s move to change the status of IHK has attracted global attention and now we have to reach out to world leaders to apprise them of flagrant rights abuses in IHK, he added.

Kashmiri diaspora is planning a demonstration outside India’s diplomatic mission in London today (Thursday) in protest against the illegal and unconstitutional annexation of IHK by New Delhi.

“India will see in the streets of London how people observe India’s Independence Day as Black Day,” Imran said. “The world wants to know what is happening in Kashmir and what Modi is hiding by keep the occupied region under curfew.”

The prime minister said Modi had committed a huge strategic blunder by attempting to change the status of the disputed region. “We will expose India at every forum. We will go to any extent for Kashmir,” he resolved.

International media and sane voices from within confirm that Hindu extremism has been on the rise since Modi’s hardline nationalist Bharatiya Janata Party (BJP) came to power in India.

Imran said Modi’s ultra-rightwing Rashtriya Swayamsevak Sangh (RSS) party has learnt from Halter’s Nazis to first organise yourself and then rule the majority. “This is what they want to do in IHK,” he added. “The Indian media is now blindly following the BJP as everyone fears these Nazi-inspired forces.” The prime minister said that abrogating IHK’s autonomous status was a strategic blunder of Modi which would be counterproductive for India. “The world will have to listen to the voice of Kashmiris,” he said, adding that now he would be the ambassador of the Kashmiri people at global level.

“Scrapping Article 370 was the last card that Modi has played and now Kashmiris will get freedom,” he said. “Kashmiris are battle-hardened and Modi can never defeat them.” Imran revealed that Modi’s Kashmir move has brought about a paradigm shift in his approach towards India. “Earlier I used to think that both Pakistan and India face common challenges like trade, poverty alleviation and climate change, but the IHK move shows Modi has no interest to put the region on the road to prosperity,” he added. The prime minister said BJP’s entire election campaign was based on Pakistan-bashing. “And now Modi has one-point agenda: to teach Pakistan a lesson. Now is the time to teach Modi’s India a lesson,” he added. Imran also paid rich tributes to Quaid-i-Azam for creating Pakistan. “If he had not created Pakistan, today we all would have been at the mercy of a fascist regime in India,” he added. AJK Prime Minister Farooq Haider and Opposition Leader Chaudhry Muhammad Yasin agreed that Premier Imran Khan’s AJK visit would send a message to the people in IHK that they are not alone in their freedom struggle.