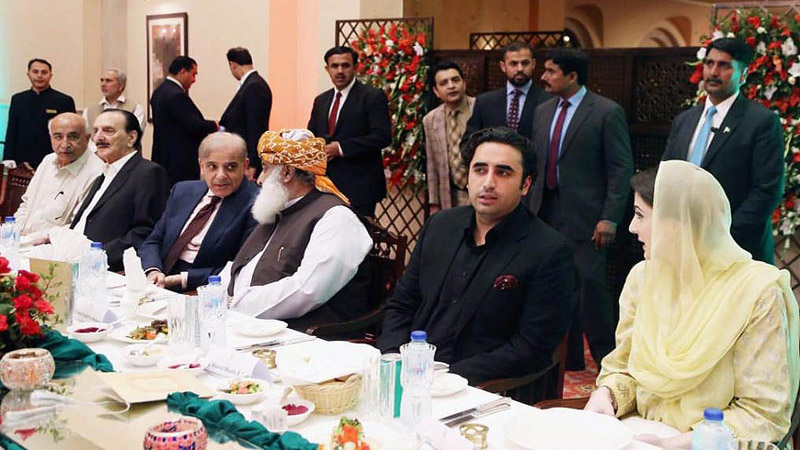 The Senate is all set to decide the fate of the incumbent chairman and deputy chairman today, with arrangements finalised to hold voting on no-confidence motions submitted against Sadiq Sanjrani and Saleem Mandviwala.

The motion against Sanjrani was filed by the joint opposition on July 9, after it reached a consensus on ousting him from the top post, naming senator from Balochistan Hasil Bizenjo as their candidate for the slot. In a tit-for-tat move, the government senators tabled a resolution against Pakistan People’s Party’s Saleem Mandviwala, who is the deputy chairman of the Upper House.

As far as the numerical position in the Upper House is concerned, the joint opposition is in a comfortable position to turn the tables on the ruling coalition. As per the statistics, the opposition parties enjoy the support of 61 senators in the 103-member House, while the ruling alliance has the backing of 40 members. The support of at least 52 senators is required to make the no-confidence motion successful.

The opposition alliance consists of the PML-N with 29 senators, PPP with 20, National Party of Mir Hasil Bizenjo with five, Jamiat Ulema-e-Islam-Fazl (JUI-F) with four senators, Pashtoonkhwa Milli Awami Party (PkMAP) of Mehmood Achakzai with two and Awami National Party (ANP) of Asfandyar Wali with one member in the Upper House.

The government alliance is in a weaker position, with PTI’s 14 senators. Its ally Muttahida Qaumi Movement (MQM) has five, Balochistan Awami Party (BAP) has two, and Balochistan National Party-Mengal (BNP-M) and PML-Functional have one senator each in the House. Eight senators, who sit on the government benches, are from the tribal districts.

“If Sadiq Sanjrani sahib has decided to resign even now, it will be a good decision,” he said at the luncheon, adding that the opposition has gathered enough numbers to deseat the Senate chairman. “It would have been good if the Senate chairman had resigned, otherwise he is going anyway,” he added.

Leader of the House in Senate Syed Shibli Faraz rubbished the talk of Sanjrani resigning, saying he will fight the election ’till the last man [and] the last moment’.

Stressing that the government has trust in the Senate chairman, Faraz accused opposition members of spreading the rumours regarding Sanjrani’s resignation.

Sanjrani, after consultation with party and government members, however, decided not to resign and instead contest the resolution.

In a statement issued on Wednesday, Sanjrani maintained that National Assembly speaker and Senate chairman are neutral and that he wants to see if they can make an independent and neutral decision for the custodian of the House. He maintained that the option of secret voting by the members ensures impartiality for the Senate chief and the NA speaker in the decision making.

He asserted that the think tanks, who structured the constitution, decided on the option of secret balloting after putting efforts and thoughts in it for 20 days. “I ran the House impartially and want to see if members can decide freely,” he added. Opposition’s joint candidate for Senate chairman Mir Hasil Bizenjo told reporters that he won “the day my name was put forward”. Claiming to have the support of 65 opposition senators, Bizenjo too suggested Sanjrani to resign. “It will be better for him as well as for us,” he said.

PPP’s Khursheed Shah warned the government to stay away from horse-trading in the matter of the no-trust vote. “Horse-trading has prevented the country from progressing,” he said, adding that opposition members are ‘respectable and honourable’.

Separately, Opposition Leader in National Assembly Shehbaz Sharif said that the constitution and democracy will become victorious in Senate polls, urging the government to avoid their ‘undemocratic conduct’. Chairing a party senators’ meeting in Islamabad, he reviewed the strategy for no-confidence motion against the Senate chairman. “No hurdle in opposition’s victory in Senate chairman polls as we have a majority in the House,” he said, warning that the conduct of the rulers is not democratic. Meanwhile, Maulana Fazlur Rehman also called on Leader of Opposition in National Assembly Shehbaz Sharif at his residence in Islamabad. The two leaders exchanged views over the no-trust motion against Senate Chairman Sadiq Sanjrani.