China’s Belt and Road Initiative (BRI) with its flagship project the China-Pakistan Economic Corridor (CPEC) has received enormous attention globally. Through BRI, worth over one trillion dollars, Beijing aims to increase China’s connectivity with countries in Asia, Africa, Europe, South America and even the Pacific. CPEC is one of the first BRI projects through an investment of $63 billion in infrastructural and other projects across Pakistan. The Gwadar Port is CPEC’s centrepiece. As some countries, such as the United States and India, have apprehensions on the BRI/CPEC, there is no shortage of false or propaganda-driven information about these projects. With the aim of providing factual information on CPEC, the book CPEC: A Precursor to Regional Economic Growth and Stability, edited by Professor Zafar Iqbal Cheema, is a step in the right direction.

Comprising of a dozen chapters, this edited volume provides timely analyses of a range of geo-economic and geopolitical issues in the context of CPEC. Various chapters of the book are written by prominent experts from China and Pakistan. This book is a product of the Strategic Vision Institute’s China Studies & Information Centre based in Islamabad.

For the benefit of readers, the book is divided into four thematic sections. The first section focuses on CPEC within the Pak-China framework with chapters written by QuratulainHafeez, Hassan Dawood Butt, and M Waqas Jan. These chapters provide a comprehensive account of the historic relations between China and Pakistan and focus on geo-economic and geo-strategic aspects of CPEC.

While the first chapter comprehensively deals with the background of Pakistan-China relationship, the second chapter by Butt argues, “The overarching vision of CPEC not only includes Pakistan’s economic well-being through regionals trade but also allows it to position itself as a key regional hub for connecting diverse cultures and societies.” In the final chapter of section one, Jan presents an inclusive analysis of Gwadar and the Gwadar Port. By examining the socio-economic situation of Gwadar, the author argues, “Gwadar holds immense potential in uplifting the socio-economic conditions of a stagnant region.”

Pakistan is likely to be strategically and militarily strengthened, diplomatically integrated, technologically more advanced and socially more synthesised with China” through CPEC

Section two of the book benefits from detailed chapters by Syed Hassan Javed, Song Guoyou and Liu Jun who focus on not just the BRI but also China’s economic rise. Javed presents a comprehensive account of China’s economic model with an analysis of the role of the Communist Party. This chapter follows Song’s examination of the grand vision behind the BRI vis-à-vis regional integration. In this chapter, the author from China claims that the BRI is not merely limited to investment in infrastructural development because “the end goal of this massive initiative is to foster a joining of hearts and minds of a diverse range of people.” 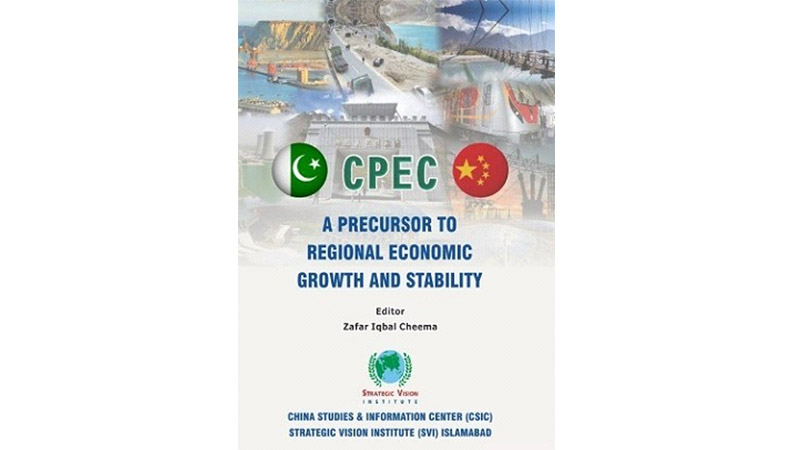 In the final chapter of this section, Liu looks at CPEC as part of the ‘New World Economic Order’ and argues that CPEC will provide Pakistan’s entry into the new world economic order. Further, the author argues, “CPEC will not only bring about development and prosperity for both China and Pakistan” but will help build a vibrant market across South Asia.

Section three focuses on Pakistan’s economy in the context of CPEC with chapters from Vaqar Ahmed and Zafar Mehmood. Ahmed’s chapter presents a balanced analysis of the pros and cons in relation to CPEC, especially with reference to Pakistan’s financial commitments. The author has put forward a range of recommendations to maximise the benefits of CPEC to Pakistan’s economy. Compared to the previous chapter, a chapter by Mehmood zooms in on the much-debated issues of special economic zones (SEZs) under CPEC. The author claims, “These SEZs are expected to be a major source of innovation and technical expertise along with a highly valuable source of [FDI].”

Section four, the final section of the book, looks at CPEC as part of a new global paradigm with chapters from Shabana Fayyaz, Shabbir Ahmed, Naeem Lodhi, Abdul-Rehman Bilal, and S Sadia Kazmi examining security and regional integration and regional potential of this project. Fayyaz focuses on security issues, such as militancy, and their implications for the economic viability of CPEC. Fayyaz is of the view that militancy, terrorism and Pakistan’s troubled relations with India will continue to pose threats to CPEC.

In the second chapter of this section, Ahmed analyses the potential of CPEC for the integration of South Asia economies with that of the Central Asian Republics that are landlocked and will depend on sea routes established through the BRI. This chapter follows a co-authored paper by Lodhi and Bilal who argue, “Pakistan is likely to be strategically and militarily strengthened, diplomatically integrated, technologically more advanced and socially more synthesised with China” through CPEC.

In the final chapter of the book, Kazmi presents a meticulous account of CPEC’s progress until the publication of this book. This chapter reveals the often-less known aspects of CPEC, for example, various bilateral agreements and the allocation of funds for those projects.

Overall, this edited volume holds rich information and analyses that are important for not just policymakers and diplomats but for journalists, researchers and students focusing on Pakistan and China. I also recommend this book to be included in the course material of Pakistan Studies’ programmes globally.