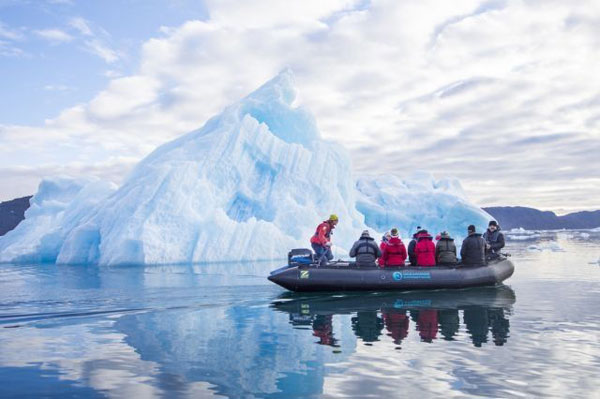 As Europe’s record-breaking heatwave drifts towards the Arctic it threatens to accelerate the melting of ice in Greenland, which already started earlier than normal this year, climate scientists warned Saturday.

After breaking records over Europe, the heatwave has swept over Scandinavia and is predicted to move towards Greenland, according to the World Meteorological Organization.

“As it is forecast to move over the Arctic it will potentially bring a large amount of energy that will melt ice, both sea ice in the Arctic Ocean and the ice sheet surface over the next 3 to 5 days,” Ruth Mottram, a climate scientist with the Danish Meteorological Institute (DMI), told AFP.

That heat will add to a summer where the melting season started early and “persistent warm conditions have led to a very large loss of ice”.

According to DMI’s models an estimated 170 gigatonnes of water have been added to the world’s oceans from melted ice and snow between July 1 to July 26.

100 gigatonnes contribute to about 0.28 millimetres (0.01 inches) of global sea level rise. The expected average would be of about 60 to 80 gigatonnes of ice over the same period.

“So we’re well over what we would normally have”, Mottram said, emphasizing that the rate of melting can vary greatly from one year to the next. There are fears that this year’s ice melt in Greenland could approach the record level set in 2012. In “2012 summer conditions were even more extreme and for several days there was quite intense melt all the way to the summit of the ice sheet at 3000 metres (9800 feet) above sea level,” Mottram said.

A similar melting event has not been observed this year so far, but with the heatwave approaching Greenland there could be a repeat.

Although the melting has been persistent this year, with relatively high temperatures day after day, “though within the normal range,” it is still unlike 2012 when melting was much more driven by “several very extreme melting days,” according to Mottram.

But Mottram also noted that higher than average melting coincides with a trend of “increasing melt rates over the last two decades”.