* Thunderstorms with heavy falls expected to continue in Karachi and other parts of Sindh today as well
* Power breakdown causes rescheduling of cases at SC Karachi registry, SHC 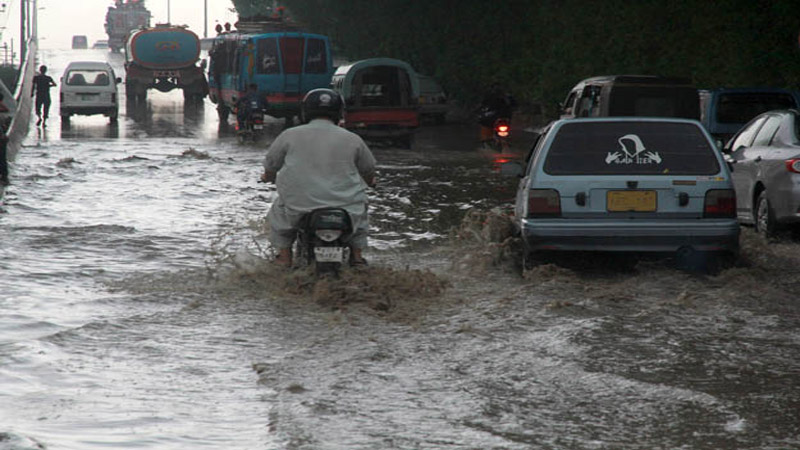 At least eleven people, including two minors, lost their lives due to electrocution as rain lashed the provincial capital of Sindh since early Monday morning, a private TV channel reported.

According to rescue sources, two children died due to electrocution while playing in the rainwater in Malir area of the city. Another two people were killed due to electrocution following rain in Paposh Nagar area, while the other deaths took place in Defence, Clifton, Gulistan-e-Jauhar, and Khamosh Colony areas. The latest deaths raised the number of casualties from rain-related accidents in Karachi to eleven.

The continued downpour, which initially started with light drizzle as early as 6:00am, continued until the evening, with heavy downpour later in the day inundating several parts of the metropolis. The highest level of rainfall, 60 millimetres, was recorded in Saddar, while Surjani Town received 50mm, Faisal Base area 45mm, North Karachi 42mm, and Nazimabad 39mm of rain, according to the Met Office.

The Met Office said widespread rains and wind-thunderstorms with isolated heavy falls are expected to continue in Karachi and other parts of Sindh province on Tuesday as well. According to an official, the monsoon system will likely end on Wednesday and that there are not much chances of rain in the first week of August.

Meanwhile, the Sindh education department announced that schools, colleges, universities and all educational institutions in Karachi will remain closed on Tuesday. Examinations scheduled at the Karachi University, the province’s largest varsity, NED University of Engineering and Technology, and the Federal Urdu University have also been postponed. New dates for the examinations will be announced later, said the administration of the varsities.

Following the first spell of rain early in the morning, around 400 feeders of the Karachi-Electric (KE) power supply company tripped. Parts of the city experienced power outages including various courts such as Supreme Court Karachi registry, the Sindh High Court and accountability courts. This affected court proceedings resulting in most hearings being rescheduled.

The KE spokesperson said power was being continuously supplied to the Karachi Water and Sewerage Board. In a post shared on Twitter, K-Electric said that the power supply situation was normal in most areas, while supply to a few parts of Gadap, Baldia Town, Gulistan-e-Jauhar and Korangi had been affected due to heavy rainfall. According to a spokesperson for the K-Electric, electricity had been restored fully or partially in North Karachi Sector 11, Nagan Chowrangi, Nipa, Block 19 of Gulistan-e-Jauhar, Airport, Nazimabad Block 5, Punjab Chowrangi, Akthar Colony, Dohraji, Bahadurabad, Tariq Road, Hassan Square and the Saddar Lucky Star area. Work is underway to restore power in affected parts of Baldia, Landhi, Gulshan-e-Iqbal and Federal B Area.

In the nearby city of Hyderabad, heavy rains wreaked havoc and roads were mostly inundated. At several places, residents faced sheer difficulties as water entered the houses and electric supply was suspended too.

The Met Office had recorded 188mm of rain till 5pm in the city. The rain that started at 3am continued intermittently till noon. Attendance at offices was low and traffic disappeared from roads while the Shahbaz Building, known as the local Sindh government secretariat, remained submerged.

Sindh Chief Minister Murad Ali Shah called Secretary Energy Musadiq Khan and directed him to ensure that power is restored in areas that are facing breakdowns.

Ahead of the rain, civic bodies in Karachi were put on high alert on Saturday and vacations of all employees were cancelled.