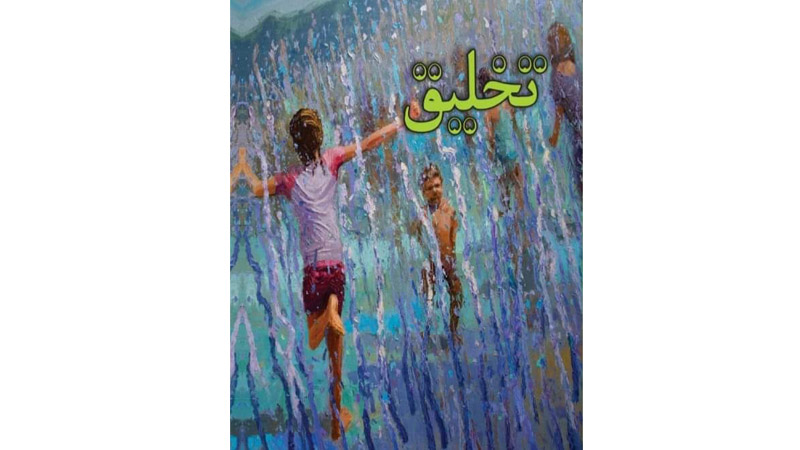 Editorial remembers many who died during 2012-2019 period from Dr Anwar Sadeed, Bano Qudsia to Iftikhar Majaz. A corner for Iftikhar Majaz has been reserved in this issue of Takhleeq. Editorial also advises its subscribers not to write long poems or ghazals and restrict their thoughts to quality of thought and less number of couplets.

Majaz was a realist in his dealings with friends, selection of books, reading and writing after office hours and looking after his guests who appeared in his TV programmes. Iftikhar Majaz was born in Sheikhupura on December 15, 1953. His father was Sahriff Ahmad Qureshi, an officer in police department.

He bore four sons Sarfaraz Ahmad Qureshi, Aizaz Ahmad Aazar, Aitezaz Ahmad Azam and Iftikhar Majaz. Aizaz was thirteen years older to Iftikhar. Aazar made a great name for himself in literary world and as Radio Jockey. Iftikhar chose proper vocabulary to express himself in criticism in his columns. He was religious and was conscious to pray regularly. Tributes have been paid by Hassan Askari Kazmi, Dr. Ayyub Nadeem and Jameel Ahmad Nadeem to Iftikhar Majaz.

In the section comprising essays Aslam Gurdaspuri pays tribute to Jacinda Arden, the New Zealand Prime Minister who took over on 26 October 2017. He prays the way she went to all the victims of massacre in a Mosque. Despite that Muslims are a minority in her country she said Assalam O Alaikum before her address in the Parliament. She by virtue of her deeds has become role model for all the leaders of the world. Ghulam Hussain Sajid highlights some traits of his student Shahid Makuli who discusses his two books ‘Sheher-e-Pas-e-Charagh’ and ‘Tanazur’, the latter for appearance of his interest in Physics and Chemistry. Sajid recalls Shahzad Ahmad whose poetry has touch of logic and psychology. This reviewer shall mention Dr. Saeed Akhtar Durrani, a scientist who died in Birmingham, UK on July 16, 2018. Durrani was a Team Leader and Principal Investigator, Lunar Research, NASA, USA and Russian Space Programme from 1972-78. UNO Advisor to Pakistan, Algeria, Egypt, Mexico and Hungary from 1981-2003. He was a scholar of Iqbaliat and his poetry book ‘Ghubar-e-Kehkashan’ has touch of Physics, astronomy in the poetry. The other essays included in this section are on Akbar Allahabadi by Mahmud Shaam, Razia Sajjed Zaheer by Muslim Shamim, Adam by Khalid Abdullah Venice and poetry as discovery of creation and soul by Bismil Sabri. The salient feature of all these submissions is that they are not lengthy and one can read one essay in one sitting.

The last story caught this reviewer’s eye. It is titled ‘Yadon Ki Raakh’ (dust of memories) – Page 87. The narrator feels that he had not led a very successful life from the point of view of how one is judged by this society. His maternal uncle’s son Jamal came to meet him, twenty years younger to him. It was a relied that he came alone to greet him otherwise the narrator’s two other maternal uncles also lived in the same city but they never bothered to meet their nephew because they felt that he was financially up to their mark. The narrator was however a famous person in his field of work but every day he had to struggle to make his both ends meet. Jamal talked about their village near Sargodha. It had been 50 years since he left his village but Jamal’s mention scrapped the scalp of his memories. Jamal had named his son after my maternal grandfather and his paternal grandfather’s name. The narrator recalled his riding a bicycle. Villager Sattu’s younger sister used to jump and sit with him on his bike. The narrator recalled his carefree and loving life back home but Jamal had put him in agony by his visit as there was no link between his past and present and his memory lane had disturbed him.

For the students of translations, a section included an American story Love – an assumption by Max Schulman and translated by Dr. Sheikh Iqbal. Another translation that catches one’s eye is Suleman Rahimov’s story ‘Ali Ummi’ by Hanif Bawa. The latter is the author of a dozen books. It is a story of a man who works day and night for his children and expects no reward. The section on Ghazals starts with one by Anwar Sha’oor followed with those by Asif Saqib, Arif Shafiq, Ghulam Hussain Sajid, Gustakh Bukhari, Hasan Abbasi, Rasheeda Ayyan, Rasheed Aafreen, Shaba Taraz, Mumtaz Rashid, Bismil Sabri, Nayyar Rani Shafaq, Shaista Mufti and Umm-e-Ammara.

Music is an essential element on Takhleeq. This reviewer’s submission on music composers Laal Muhammad Iqbal is included. This reviewer is an ardent fan of Pakistani music composers Lal Muhammad Iqbal because of their exploiting Raag Bhopali in its true spirit in Mehdi Hassan’s song ‘Duniya Kisi Kei Pyar Main Jannat Sei Kum Nahin’ for the 1966 movie ‘Jaag Utha Insaan’. This movie was released on Friday 20th May 1966. The film was produced in Karachi by Habib Pictures. In those days Karachi used to be the second hub of Pakistani film industry after Lahore. The soft voice of Mehdi Hassan, the basic melody of this song still captivates the music lovers for its tunefulness.