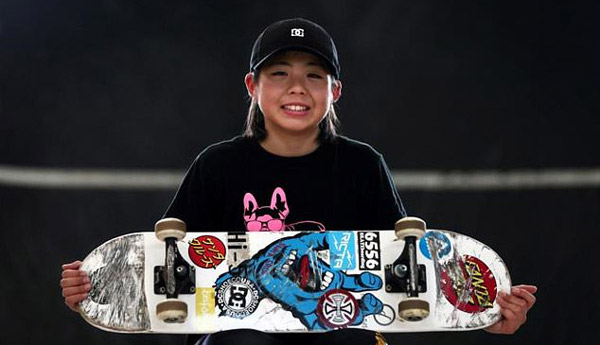 Whisper it, but tiny Japanese schoolgirl Misugu Okamoto looks to have become the host country’s best hope to win skateboarding gold at the 2020 Tokyo Olympics.

A year from the start of the Games, the bashful 13-year-old screws her nose up at talk of making history when the hipster sport makes its Olympic debut — for fear of jinxing a sizzling run of form.

“If I listen to all that, I worry it will go to my head,” Okamoto told AFP after practising. “I don’t want to get carried away — that’s happened to me before and I’m scared it could happen again so I just try to block it out.”

Good luck with that. Having just topped qualifying for this summer’s X Games, the teenager is hot property.

At a shade under 1.42 metres tall (4ft 6in), Okamoto makes skateboarding look ridiculously easy with her smooth-flowing technique, ice-cool temperament and the ability to bust out hair-raising aerial spins with an effortless grace. Less than a week before her 13th birthday, she won the Dew Tour park final at Long Beach, a qualifier for the 2020 Tokyo Olympics, forcing people to sit up and take notice.

Okamoto followed that by storming to victory at the X Games qualifier in Idaho to book her first appearance at the extreme sports event, to be held in Minneapolis from August 1-4. “It didn’t really sink in that I’d won,” the Aichi-born skater said at a skate park in rural Ama, near Nagoya in central Japan.

“It gave me a little more confidence,” added Okamoto, who took up skateboarding in primary school.

“But I really didn’t come away thinking it was that big a deal.” Despite her modesty, the way Okamoto nonchalantly pulled off successive “McTwists” — a spectacular front flip with a 540-degree rotation — stunned commentators in Idaho.

“It took me over a year to be able to do that 540 in practice,” revealed the Japan Open champion, who has her sights on success at prestigious international events such as the X Games and Vans Park Series.

“I love the challenge of trying new techniques — I get obsessed with that.”

With half-Japanese sensation Sky Brown opting to skate for Britain, the pressure is on the likes of Okamoto and Sakura Yosozumi, who holds the world and Asian park titles, to nail down Japan’s two Olympic spots.

On her 11-year-old rival Sky, Okamoto said: “She’s always smiling — and she’s got big tricks, which are very cool.” But Okamoto detests the p-word. “I don’t feel any pressure,” she insisted, still battling jet-lag after returning from Los Angeles.

“I’m too soft on myself sometimes and can be my own worst enemy. After I won, I’d get carried away and then my level would drop off — that kind of stuff kept happening, so I’m trying hard to fix that and just focus on myself.” After dropping into another run of big-air jumps, Okamoto added: “I love that feeling of flying. I want to be a skater who can compete with the best in the world.”

But while Japan has strength in depth in women’s skateboarding — with 10-year-old Kokona Hiraki, Mami Tezuka and Kisa Nakamura all making the top 10 in Long Beach along with Yosozumi — the Olympic hosts have fewer contenders in the men’s. Enter Kensuke Sasaoka, the reigning Asian Games champion.

The Japanese number one could be joined at Tokyo 2020 by two-time Olympic snowboarding silver medallist Ayumu Hirano, who underlined his skateboard credentials by scooping the national title earlier this year.

But Sasaoka looks to be Japan’s best medal hope.

“Foreign skaters are so strong in terms of style, speed and technique,” said the 20-year-old, who models his skating on flamboyant Brazilian Pedro Barros, a six-time X Games gold medallist.

“I’ve still got a lot of catching up to do but hopefully I can close that gap.”

Sasaoka, whose older brother Kent coaches Okamoto, is on course to qualify for the Olympics and has no fears about competing on the biggest stage of all.

“It would be awesome to make the Olympics but I don’t want to just take part,” said the Japan Open champ.

“I want to aim for the top spot and leave everything out there.”