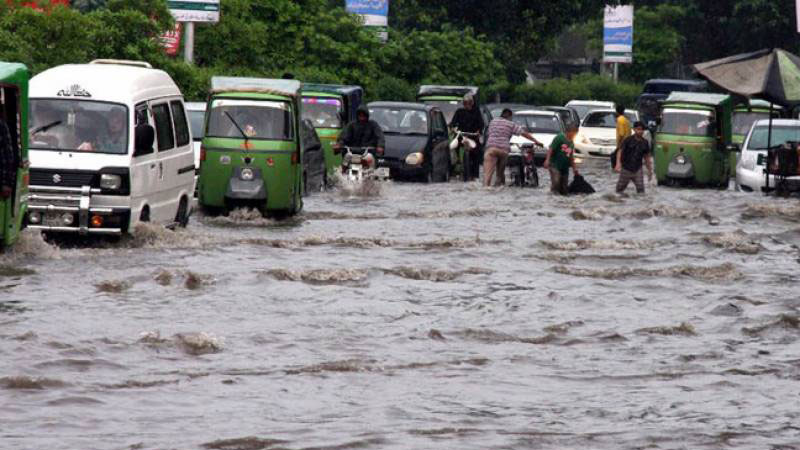 Heavy monsoon rain lashed the city and its adjoining areas on Thursday morning. The incessant rain flooded roads and streets in many parts of the city which stopped many vehicles mid-way.

Rainwater entered houses in several low-lying areas of Lahore while parts of the city witnessed power outage as more that over 180 LESCO feeders tripped soon after the rain started. Despite the government’s tall claims of improving the sewerage infrastructure in the city, the second spell of monsoon was enough to paralyze the city.

Traffic flow was also disrupted due to accumulation of rainwater on the roads. It was common sight to see people pushing their cars as they came to a halt due to excessive inlet of water into the mechanical parts.

In the absence of a functional sewerage system, water entered the homes and shops of citizens, who spent the day pushing it out of their homes. On top of this, power outages were reported across multiple areas of the city, which added to the miseries of the people. Shadman, Mozang, Waris Road, Ichra and Walton were among the most affected areas.

Lahore, Gujranwala, Faisalabad, Rawalpindi, Peshawar and Sargodha are also expected to be inundated by water collected from the rains. Moreover, high floods are expected in the upstream of Mangla, River Chenab and Indus.

It may be noted that the city was paralyzed in the earlier part of the week when torrential rain hit the city. The city administration was badly exposed, as many parts of the city were inundated with rain water while the citizens had no clue as when the rain water would drain out.