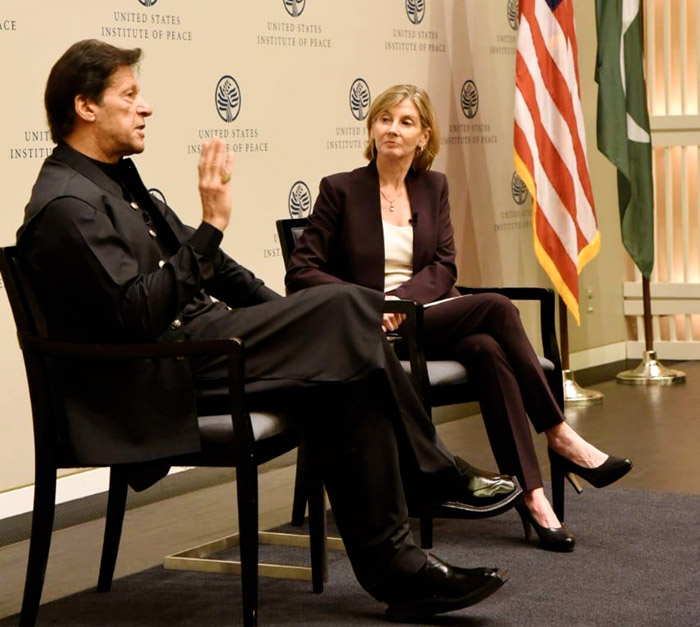 Prime Minister Imran Khan on Tuesday said that Pakistan’s “top priority is to build good relationships with our neighbours” apart from putting an end to corruption and building strong institutions.

Speaking at the US Institute of Peace (USIP), he said: “We must have stability in our region.”

Regarding the Kashmir issue, he said it was important to know what Kashmiris wanted. “Because of one issue, Kashmir,” India and Pakistan were unable to improve their relations, he said, and regretted that every time the two countries made any progress, “some incident happens… and we go back to square one”. Imran said the biggest problem India and Pakistan faced was poverty, and added that the best way to reduce it bilateral trade.

With regard to Iran and its tensions with the US, the PM said, “People don’t understand the gravity of the situation” resulting out of a war with Iran, and that such a war would be catastrophic for the world and for Pakistan.

Imran Khan hailed his White House meeting with President Trump as a “pleasant surprise”, saying the Pakistani side was blown over by the US leader’s welcome and conversation.

“When we met President Trump, the straightforward, charming way he treated us was wonderful. We were blown over. We decided together we will now have a good relationship with the US,” he said.

He said his government had “stabilized the economy” which he inherited in a state of virtual bankruptcy.

“Today, the government and the military are on the same page with regard to the peace process in Afghanistan,” Imran said. He also expressed confidence that there was a “convergence between the United States and Pakistan” when it came to recognising that there was no military solution to deal with the war in Afghanistan.

He said that he viewed the dynamic to be different now, as both sides were finally looking at things through the same lens. “The Pakistan Army was fighting but they [the US] thought we are not doing enough […] we had gone out of our way. But this time, we are all on the same page that only a political settlement through dialogue will work,” said the prime minister.

In January this year, US Secretary of State Michael Pompeo had emphasised a new “sustainable” strategy of the United States for fighting terrorism which seeks to end long, drawn-out wars

“President Trump very much wants to end these long, drawn-out [wars] – 17 years now in Afghanistan,” the chief US diplomat had said while explaining how the new, multi-pronged approach was different from the policies of the previous US administrations.

In Tuesday’s discussion with Nancy Lindbord, the president of the United States Institute of Peace, Imran expressed great hope that a political settlement to the Afghan war could be reached and that the relationship between the United States and Pakistan had great potential after this visit.

When asked what makes things different now in the relationship between the two countries compared to the past, the premier said, “I always felt [previously] that the relationship was never multi-pronged, always transactional.”

The premier, providing a backdrop to the circumstances that led to the present situation in Afghanistan, said that the ‘jihadists’ had been convinced to fight against the US and once the ‘jihad’ was over, the US packed up and left and “we were slapped with sanctions”.

“We were left with 4 million Afghan refugees […] a number of militant groups created to fight the soviets, all dressed up and nowhere to go, heroin, drugs – which at some point were used to pay for the fighting,” he continued. He said that after 9/11 Pakistan again joined the US [in the fight against terrorism]. “I only had one seat in parliament. When Gen Musharraf consulted us [on whether we should join the war] I opposed it and said we should stay neutral.”

He then went on to explain why he felt it would have been in Pakistan’s best interest to remain neutral. “We had created these jihadi groups in the 80s. We had indoctrinated them in the idea of jihad. That foreign occupation in Afghanistan […] it was a religious duty to fight them. So all these foreign groups, including al Qaeda had arrived in Pakistan.”

The premier said that the years that followed were “the worst time in our history”.

“These groups turned against the Pakistan Army and the state of Pakistan. And not only that, there were linkages between these groups and the Pakistan security forces because they had created them.”

“We had insider attacks, the GHQ was attacked, the generals were killed, the ISI headquarters were attacked. The army at one point could not go into the cities in military clothes or with military cars. It was that bad,” PM Imran said, as he asserted his view of why Pakistan should have never gotten involved.

“The second thing was the tribal areas. We should never have sent our army into the tribal areas, Imran said. “The tribal area per capita was the most weaponised area in the world,” he said, pausing to provide a brief history of the region that had been left autonomous post-British era and that had “lived by its own rules”.

With regard to free press, the premier said, “The Pakistani media is even freer than the British media… Not just free but sometimes out of control. In Britain, no media would be allowed to publish the kind of news our media publishes,” the PM added.

Citing improper reporting around his marital life and how, once, an anchorperson had said Imran would be divorced the next day, he said, “We will strengthen the media watchdog, it is not censorship, we will strengthen the watchdog.” There were 70 or 80 channels but only three or four have issues, Imran said, adding, “I am probably one of the biggest beneficiaries of the media when we had free media [after 2001]”.