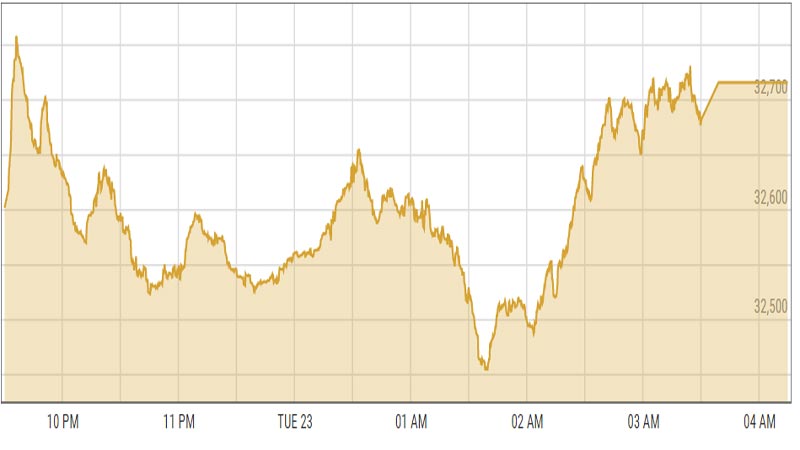 The KSE 100 Index surged from the moment trading began, but selling pressure after the first half hour dragged the index down. The index continued to oscillate between red and green zones in the remaining session.

The trend changed later in the day as investors once again resumed buying, which helped the index advance into the green zone.

JS Global analyst Maaz Mulla said lacklustre activity prevailed in the market for most part of the day, as volumes stood low and the index juggled between red and green.

“On the news front, Foreign Minister Shah Mahmood Qureshi has said that White House talks between Pakistani and American leaders mark a new beginning in bilateral relations. Going into the talks, President Trump offered to mediate between Pakistan and India on the key Kashmir issue and applauded Islamabad’s help in facilitating talks between the US and Afghan Taliban,” Mulla said.

Honda Atlas Cars (+2.6%) from the auto sector declared its 1QCY20 results, where the company posted earnings per share of Rs 1.69 translating into 79% quarter-on-quarter and 77% year-on-year plunge in profitability.

In a report, Topline Securities stated that the KSE-100 index extended gains for the second session in a row as it gained 131 points to close at 32,715.

“Investor sentiment improved as Prime Minister Imran Khan concluded a successful meeting with US President Donald Trump in which the latter hinted that US aid to Pakistan could be restored,” it said.

“Furthermore, the US president also mentioned that trade activity would be increased with Pakistan, which can lead to an improved trade balance in the near future.”

Trade volumes were up 117% and traded value rose 76%. Maple Leaf Cement was the volume leader followed by Unity Foods and WorldCall Telecom.

In other news, the power sector’s circular debt crossed Rs 900 billion and independent power producers (IPPs) were questioned by the Inquiry Commission on Debt about purported higher-than-permissible profits.

On the other hand, the Federal Board of Revenue (FBR) withdrew 1% withholding tax on yarn business and manufacturers would instead pay 0.1% turnover tax, the report added.

Overall, trading volumes increased to 97.1 million shares compared with Monday’s tally of 44.7 million. The value of shares traded during the day was Rs 3.49 billion.

Shares of 318 companies were traded. At the end of the day, 178 stocks closed higher, 110 declined and 30 remained unchanged.

Foreign institutional investors were net buyers of Rs 217.6 million worth of shares during the trading session, according to data compiled by the National Clearing Company of Pakistan.