US president offers mediation on Kashmir

* Imran Khan says more than a billion and quarter people in the subcontinent are held hostage to Kashmir issue
* Trump says relations with Pakistan are much better today than in years past, talks about expanding bilateral trade by ‘10, 20 times’ 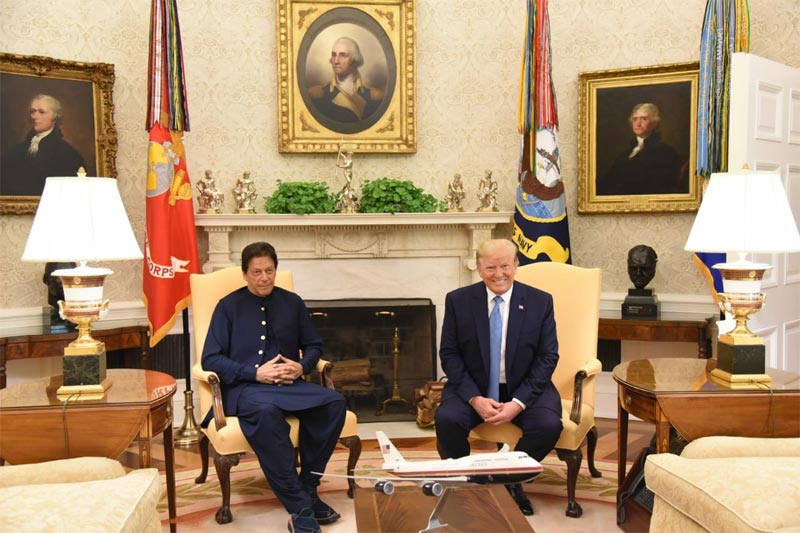 United States President Trump Donald on Monday offered to help mediate the long-running Kashmir conflict between Pakistan and India as he met Prime Minister Imran Khan for the first time.

During the meeting at the White House, Trump said he would be keen to help, if the two countries asked him. “If I can, I would love to be a mediator,” Trump said. After Imran responded that he would welcome Trump’s mediatory role, Trump revealed that India’s Prime Minister Narendra Modi had also asked him to do the same and said he would “gladly” play the role. Imran said the United States was the most powerful country in the world which could play an important role in bringing peace in the subcontinent. “There are over a billion and quarter people in the subcontinent. They are held hostage to the issue of Kashmir,” he added.

But the official spokesman for India’s ministry of external affairs, Raveesh Kumar, said Modi had not asked Trump to help mediate. “It has been India’s consistent position … that all outstanding issues with Pakistan are discussed only bilaterally,” Kumar wrote on Twitter.

Imran Khan previously expressed concern that recent skirmishes between Pakistan and India would escalate into war. Pakistan’s Ambassador to the US Asad Khan called on the US to increase diplomatic efforts to avert a war.

Trump also touted US military capabilities in Afghanistan, and said that he could win the war in Afghanistan in a week, but that he didn’t want to kill millions of people and wipe Afghanistan “off the face of the earth”. He said he wanted to work with Pakistan to help get a deal with the Taliban that would end America’s longest war. “I could win that war in a week” but “I don’t want to kill millions of people”, Trump said.

Afghanistan was high on Trump’s agenda as he met Imran Khan. White House officials said last week that Pakistan could use its influence on the Taliban to help the US “extricate” from Afghanistan. Trump said although the relationship with Pakistan had been fraught, it was improving. “It’s the best it has been for a long time and it is getting better.” Trump said.

Trump also boasted that he had many Pakistani friends In New York and, while nodding towards Imran Khan, said, “They are like him, strong and determined… Pakistanis are great people.” Imran wants to reset relations with the US in hopes of securing more investment, trade and possibly a restoration of American aid that Trump cut. He said he never believed that there was a military solution to the war – he thinks the US and the Taliban were closer to a peace deal than ever before.

He said millions of people had been affected by the Afghan war and Pakistan was the worst affected country in the region from the decades-old war. He said Pakistan would be straightforward in its cooperation on Afghan peace process.

“We hope that in the coming days we will be able to urge the Taliban to speak to the Afghan government and come to a settlement, a political solution,” Imran Khan said in the Oval Office meeting when reporters were present. Monday’s visit was meant to smooth tensions and address complex problems facing both countries.

Earlier in the day, leading Republican Senator Lindsey Graham called on Imran Khan at the Pakistan House. Graham, a top ally of the president on Capitol Hill, played a key role in arranging the White House meeting. According to Pakistani officials, Graham was “blown away” by Imran Khan when he visited Islamabad in January and praised what he saw as a change in Pakistan’s security policies. Imran Khan and Graham discussed bilateral relations and the region. Following the meeting, Graham tweeted, “Tremendous business opportunities exist between Pakistan and the US through a free trade agreement tied to our mutual interests. It’s also our best chance in decades to reset the relationship between the US and Pakistan.” 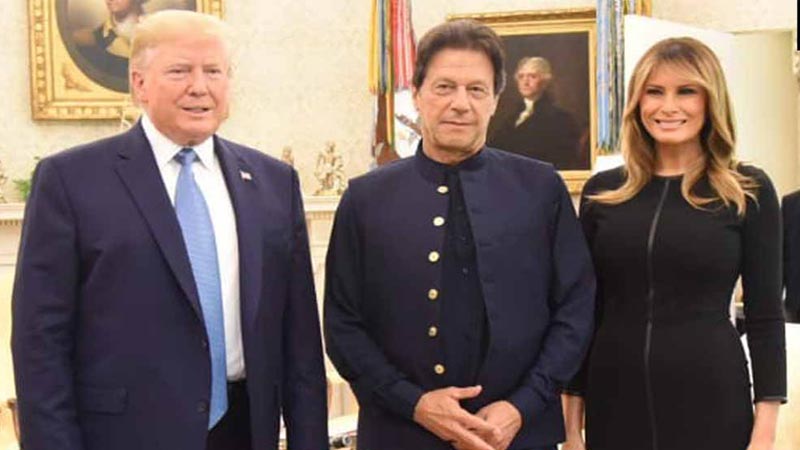 Trump spoke of possibly restoring $1.3 billion in American aid that he had cut last year, depending upon the results of the meeting. The Pentagon said Chief of Army Staff (COAS) General Qamar Javed Bajwa will meet later on Monday with the top American military officer, chairman of the US Joint Chiefs of Staff General Joseph Dunford. Analysts believe General Bajwa will play a key role in behind-the-scenes discussions, with the military looking to persuade Washington to restore aid and cooperation.

Trump told reporters he would discuss the case of Shakil Afridi – a jailed doctor believed to have helped the CIA track down former al Qaeda leader Osama bin Laden – with Imran Khan, besides the case of other “hostages”. Imran told Trump that he had brought him “good news” on two hostages, but did not elaborate on what he meant while reporters were present.

Trump also said that the US was willing to invest in Pakistan and sees great trade opportunities there. He also talked about expanding trade “10, 20 times”. In reply to a question on whether he would ever go to Pakistan, which he at one point described as a “wonderful country”, Trump joked that while he had yet to be invited by PM Imran, he would “love to” visit one day.

The White House also issued a fact-sheet of the meeting, saying that President Trump was working to strengthen cooperation with Pakistan on issues that were vital to the peace, stability, and prosperity of the South Asia region.

It said the US was committed to creating the conditions necessary for a peaceful South Asia, and that Trump wanted to build stronger economic and trade ties with Pakistan, which would benefit both of the countries.

It said Trump “acknowledges the initial steps” Pakistan had taken to improve regional security and counter terrorism. “Pakistan has made efforts to facilitate the Afghanistan peace talks, and we are going to ask them to do more.”