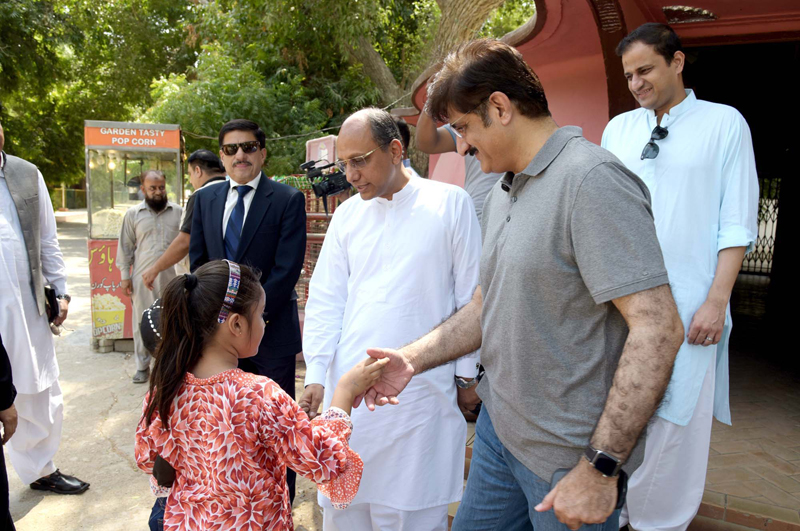 Sindh Chief Minister Syed Murad Ali Shah, on Sunday, asserted that the Ghotki District Administration was capable enough to provide security to the by-election being held in NA-205. He maintained that it was up to the Election of Commission of Pakistan what kind of security and forces they were to deploy on the polling day.

The Chief Minister was talking to media sources during his unplanned visit to the city. He was accompanied by Local Government Minister Saeed Ghani and his Advisor on Information Murtaza Wahab.

To a question, he remarked that the Election Commission was competent enough to take the final decision about the security arrangements and deployment of forces in NA-205.

CM Shah noted that NA-205 had traditionally been the seat of Pakistan Peoples Party (PPP), from where the party had won numerous provincial assembly seats. “Our provincial assembly member remained ineffective, otherwise PPP would have returned from NA-205 during 2018 general elections,” he added.

Brushing aside the impression of using government machinery, the chief minister maintained that the opponents were foreseeing their defeat and were, therefore, levelling baseless allegations. He added that the opponents believed that PPP would have no candidate to contest bye-election on NA-205 and when we fielded a genuine and the most popular candidate, now they [opponents] were levelling baseless allegation of using government machinery.

“PPP candidate has launched a vigorous and door to door campaign and I am sure he would return with the vast majority of votes,” he hoped.

While talking to media sources at Lyari, CM Shah claimed that he was carrying out developmental work without any political consideration. “We do not care whom the residents of the area where uplift works were in progress had given vote but what we care about are their problems and their right,” he remarked while adding that it was their right to have good infrastructure in their localities, for which he was working hard.

He said that Blue Line BRT project had not been abandoned or cancelled but the private party interest in the project had withdrawn from the work. Therefore, his government was exploring an alternate source to launch it.

The CM said that as far as Yellow Line and Red Line BRTs projects were concerned, they were launched with the assistance of the Asian Development Bank and World Bank.

These two projects had been approved by the ADB and WB and were now sent to ECNEC for their final approval.

The chief minister apprised the media that he had launched new schemes in the city to the tune of Rs 1714.340 million.

These schemes include Rehabilitation of I.I Chundrigar Road worth Rs 248.340 million; Rehabilitation /providing of fixing Gantries, Sign Boards, Indication boards, along Ibne Sina Road from Liaquatabad No10 to Shershah worth Rs 260 million; a scheme of providing and fixing traffic signal, gantries, signboards, indication boards and beautification of University Road from MA Jinnah Road to Peoples Chowrangi worth Rs190 million.

CM Shah further added that an Rs10.76 million Karachi Package of 17 schemes was in progress and their schemes would start completing from end of August to the end of December.

These ongoing schemes include the construction of an underpass at Submarine Chowrangi of Rs 2.2 billion and 95 per cent work on it has been completed.

The replacement of existing damaged 12 dia water supply pipeline with 16 dia pie and enhancing of pumping machinery at UC-4 Metrovile pumping station and provision of eight dia water supply line from Hazar Chowk to Al-Wajid Town was nearly completed. The rehabilitation of Karachi Zoo scheme was launched for Rs 391.934 million and over 55 per cent work has been completed. The construction of road from Tank Chowrangi to Super Highway via Thadho Nala worth Rs 574.175 million was also nearly completed. Work on a flyover at Tipu Sultan Intersection worth Rs 66.218 million was completed. 80 per cent of the work on an underpass at Tariq Road Intersection along Shaheed Millat Road of Rs 314.491 million was completed while 70 per cent of the work on an underpass at Hyder Ali Intersection worth Rs 273.776 million was achieved.

The reconstruction scheme of Stadium Road from University Road to Rashid Minhas Road worth Rs 693.505 million was completed by 80 per cent. The recently launched construction of U-turn at Natha Khan bridge was a Rs 214.466 million scheme, five per cent of which was completed.

Work on construction of roads in surrounding areas of Lea Market, Lyari, worth Rs 649.21 million was achieved by 32 per cent. Remodelling 12000 road, Landhi, Korangi, was a Rs 2.03 billion scheme, which had been completed by 99 per cent.

It had two other components including a bridge at Korangi No.2-1/2, and another bridge at Korangi No 5, 60 per cent of which was completed. Widening of the bridge over Orangi Nalla near Habib Bank was an Rs125.35 million project, which was 56 per cent completed. The construction of Storm Water Drain from Star Gate to Chakor Nala, Shahrah-e-Faisal, with a cost of Rs198.806 million was also under progress.

A scheme of Rs399.580 million was launched to lay a 24-inches dia ms pipe from Habib Bank to Pump No 3 for improvement of water supply to Baldia Town. 70 per cent of the project was complete.

Rehabilitation of 8000 road from Jam Sadiq bridge to Dawood Chorangi was launched for Rs 1.2 billion, on which 45 per cent of the work had been done.

The CM noted that he was committed to the people of Karachi to give them the best infrastructure and services to change their lifestyle. Had the provincial government not faced a shortfall of Rs 95 billion in the federal transfers in 2018-19, he would have completed more schemes in the last financial year, he continued.

Along with his ministers and media persons, CM Shah had breakfast at Boating Basin. He also took selfies with the visitors dining there.