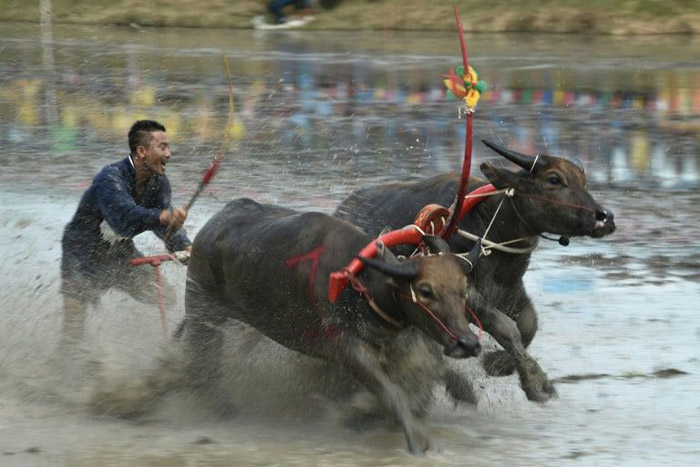 Sloshing across a muddy field with men sprinting behind them, prized water buffaloes blow past cheering spectators in eastern Thailand on Sunday in a rare display of bovine speed. Tractors have largely replaced the big beasts in daily work but farmers in Chonburi have preserved the more than 100-year-old racing custom to mark annual rice plantings. “Before, we used buffaloes to plough rice fields. When our work was done, we held the buffalo race as relaxation,” said owner Thanin Sae-tiew, 52. “It has since become our tradition.” Pairs of horned buffaloes thunder to the finish line while a racer grasping a red plough tries to hold on until the end or face disqualification — and excited laughter from the crowd. It’s less about winning the 3,000 baht ($100) prize than pride in victory, though the best buffaloes can fetch higher prices when sold. And they are treated to fancier food than most livestock. Racer Noppadol Pornpaipan, 22, says his animals are fed boiled rice, eggs and chicken extract in the evening. But come race day they get a special meal of rice mixed with a little shark fin soup that supposedly boosts buffalo energy.