With no sea, regatta on Drina is equally good for Serbs 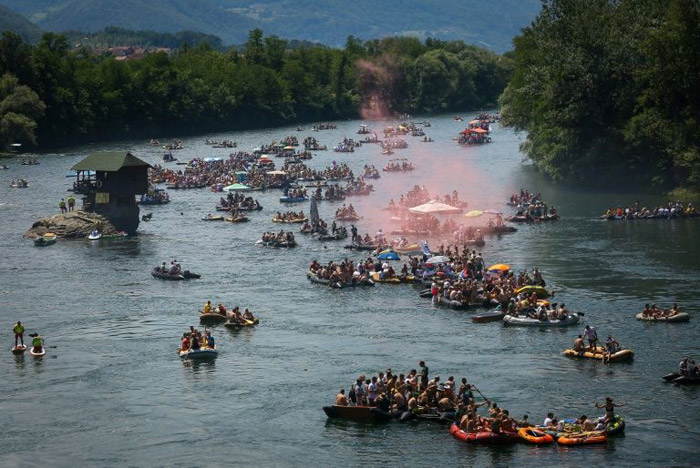 Having no natural access to sea does not stop Serbs from organising a regatta: thousands this weekend boarded a motley fleet of craft floating on river waters for the “Regatta on Drina”.

The annual celebration of exuberance and excess starts with pallets of beer, often consumed before the improvised fleet casts off by the end of the morning in the western Serbian town of Bajina Basta on the Drina river, a natural border with Bosnia.

With Serbian flags fluttering in the wind and “turbo-folk” music cranked up, hundreds of inflatable dinghies, makeshift rafts, lorry inner-tubes, even giant inflatable flamingos and the occasional boat float and row for hours on the Drina cheered on by the crowds and bands on the bank.

The flotilla is lit up by torches and flares that cover the river with a multicoloured mist as the boom of firecrackers echoes across the water.

Tying up their boats together, the participants turn them into dancing podiums, floating slowly toward the foot of the Bosnian mountains.

The landlocked Balkan state cannot claim to be a tourism power like neighbouring Croatia with its spectacular Dalmatian coast, but the sector is growing with 3.4 million tourists in 2018, half of whom were foreigners.

Considered as a European capital known for its night-life and strong contemporary art, Belgrade is one of Serbia’s attractions.

But green tourism in often mountainous and wild landscapes, such as Bajina Basta, is becoming increasingly popular.