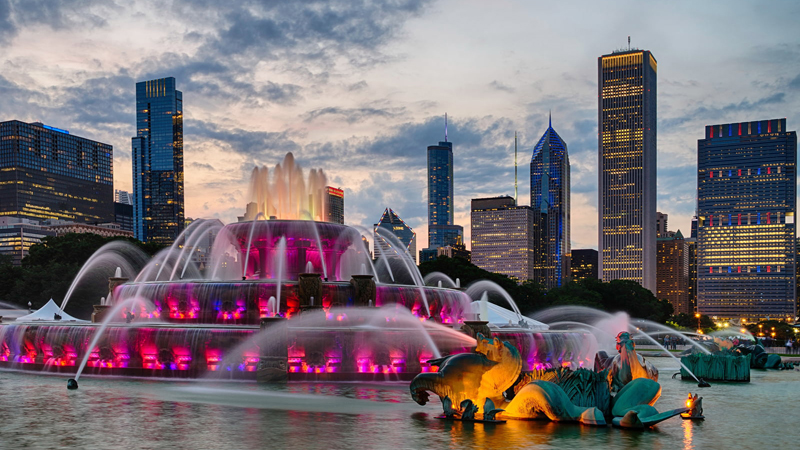 Waking up on my first morning in America, pink hues flood my room at the historic Drake Hotel. I gaze out over Lake Michigan, taking in the fact that I have finally made it to the USA for the first time in my life and in the city I’ve always wanted to visit, Chicago. After a very late night, I eagerly get ready for a busy few days and dash down to the opulent lobby to take a quick tour of my home for the next day.

The Drake is right on the doorstep of the city’s most exclusive shopping, nightlife and dining area. I take a peek into the stunning 6,838 square foot Gold Coast ballroom with its imposing, gold-leaf embossed columns. Impressive. High society recognised the hotel as the quintessential social hotspot. Princess Diana is just one of the big names the hotel boasts about at every turn. The staff are extremely attentive and afternoon tea at the Palm Court is very moreish later that day as a harpist fills the air with music in front of a water fountain and huge floral tree. But it’s all a bit too high-class for me as I rush to get out and explore more of the city. In hindsight, to me, The Drake’s glory days of being the go-to place for top names are gone. Its luxuriousness is slightly worn, its long and empty hallways echoing famous footsteps now long gone.

The Ledge at Skydeck Chicago is one of the must-visit places in the city. I have a fear of heights and today I’m going to tackle that fear up on the 103rd floor, in a glass box extended four feet out from the Skydeck. I shakingly peer down 1,353 feet down at the pedestrians and traffic passing by as a feeling of exhilaration and adrenaline take over. Like an excited child, I power walk across the rest of the floor, taking in the 360-degree views spanning up to 50 miles and taking in the four states of Michigan, Indiana, Iowa and Wisconsin out in the distance. The sun is beaming, the sky is blue and the city is gleaming. Today’s going to be a good day.

The Chicago Architecture Foundation Centre River Cruise is a must for out-of-towners. A comical volunteer tour guide interprets more than 50 buildings along the Chicago River as we learn how Chicago grew from a small settlement into one of the world’s largest cities, all in less than 100 years. In 90 minutes, I get the real story on Chicago architecture and its history, with a little of Erik Larson’s “Devil in the White City” and a look back at the Great Fire of 1871 thrown in.

If there’s one thing that’s been in my line of vision from the moment that plane hit the tarmac, it’s authentic Chicago deep-dish pizza. And what better place to try it that at the world-famous Lou Malnati’s Pizzeria, right? Wrong. The joint has apparently stayed true to the original Chicago-style pizza pie recipe that Grandpa Malnati created in 1943 at the city’s first deep-dish pizzeria. It may have been edible back in 1943 but, tonight, the pizza arrives looking like an average pizza, complete with a rock hard crust, a bland cheese and tomato topping and a watery and soggy centre. I think I’ll save my appetite for Giordano’s. Thank you, TripAdvisor users.

There’s a slight chill in the air but Art on the Mart on W Wacker Drive is a spectacle to behold. This impressive light installation, in line with the 2019 Year Of Chicago Theatre, uses 34 projectors to illuminate the 2.5-acre river-facing facade of theMART building – the equivalent of two football fields. All in all, a pleasant end to an eventful day.

After a broken sleep, I awake tired and pack, now heading to my home for the next two days, The Palmer House. It couldn’t be a world away from The Drake. As in a casino, people chat, argue, drink, socialise, laugh and talk across the entire entrance, lobby and bar area. I’m already missing the calmness of The Drake. I’ve not had my morning coffee and did not sign up to have my senses so viciously assaulted this early on. The check-in desk is chaotic and I seek bell service to take my bag. I’ll avoid checking in for now and head out to the reason I’m in Chicago in the first place: Hamilton: The Exhibition.

Alexander Hamilton’s remarkable story has inspired millions of Americans. I’ll be seeing the show later but, before I do, I’m eager to see it through his eyes in this new 360-degree immersive exhibition inspired by the revolutionary musical.

Featuring an audio tour narrated by the musical’s author Lin-Manuel Miranda, the exhibition takes me deeper into the life and times of Hamilton while, at the same time, chronicling the American Revolution and the creation of the USA. With a dynamic and interactive mix of lighting, sound, multimedia, music and historical artifacts, I feel lucky at being among some of the first people in the world to experience how it felt to write the way Hamilton wrote, fight the way he fought and live the way Hamilton lived. Americans on the tour with me buzz as they fill with an overwhelming sense of pride, something I can’t emulate.

By now, the heat is almost unbearable as I hop an Uber to Cruz Blanca, a small-batch brewery focused on ModMex lagers, sunny IPAs and tropical wild-fermented sours, the ideal day to enjoy some of each, coupled with moreish Mexican food.

Before dinner, I pop by the Chicago Cultural Centre where I’m lucky to happen across the eccentrically enthusiastic historian Tim Samuelson. Drawn by its beauty and the free public events, hundreds of thousands of visitors come to the centre every year, making it one of the most visited attractions in Chicago. The stunning landmark building is home to two magnificent stained-glass domes, as well as free arts and family events. The warm Tim takes me on a whistle-stop tour of Chicago music, an experience I’ll always treasure.

The Italian Village is home to three restaurants, each with its own chef. How they differ from each other I’ll never know in this maze. But I take a seat somewhere and settle for a huge chunk of salmon atop a mountain of tomato pasta, a portion so large even Adam Richman would struggle to finish it. Then it’s onto the CIBC Theatre for Hamilton.

The story of America’s founding father, an immigrant from the West Indies who became George Washington’s right-hand man during the Revolutionary War and was the new nation’s first Treasury Secretary, features an infectious score that blends hip-hop, jazz, blues, rap, R&B, and Broadway. While the audience, many Americans, are brought to their feet at the end, ready to pop with pride, as at the exhibition, the show clearly doesn’t resonate with me as it does with the rest.

The Chicago Architecture Foundation Centre River Cruise is a must for out-of-towners. A comical volunteer tour guide interprets more than 50 buildings along the Chicago River as we learn how Chicago grew from a small settlement into one of the world’s largest cities, all in less than 100 years

After a lovely two days, the temperature outside suddenly plummets as the city is hit with snow. I had one too many wines last night after Hamilton and today just isn’t going to be the day for me. The breakfast line going into The Palmer House’s Lockwood Restaurant snakes across the lobby, past the bar and check-in and up the stairs. I think I’ll save myself the pain and just wait for a burger at RJ Grunts.

RJ Grunt still exudes the funky, devil-may-care lifestyle of the seventies in its style, décor, music and, sadly, its menu. I may have found respite from the cold but the patty melt burger just makes me feel worse than I already do. It’s oversized, greasy and bland and tasteless. I down my water and dread the next stop in this weather: a tour of Wrigley Field.

After getting stuck in heavy traffic, I’m late and tentatively step out into the icy wind. The tour guide leads me down into the warm bar to join the rest of the group. One of the most storied stadiums in all of sports, Wrigley Field’s been visited by generations of loyal Cubs fans and holds countless memories of games past. I learn some of the game’s greatest moments, such as Babe Ruth’s alleged “called shot” in the 1932 World Series. We’re led out onto the hugely impressive field for a photo op, but I make my excuses and bolt into the warm Uber I’ve just ordered.

After a nap, it’s off to the Broken English Taco Pub which combines a unique take on Mexican street style tacos, refreshing cocktails, eclectic music and vivid artwork. The delicious tacos leave me wanting more but it’s off to Djembe! at The Apollo Theatre, a high-energy show of powerful storytelling and inspiring music in which the audience get their own drums. A disruptive audience member forces a break early on but that doesn’t ruin the mood after he’s removed.

I aim for an early night and pack as I’m heading home tomorrow, but not before I get to try brunch at the world-famous Walnut Room in Macy’s. The 17,000 square foot dining room is both elegant and comfortable but there are more staff members than customers and the atmosphere isn’t what I thought it would be. Still, brunch hits the right spot as I dash for the airport, feeling sad at the fact I didn’t get to see more of Chicago. There’s always next year.