Wall of noise as Alaphilippe silences Thomas on Tour time-trial 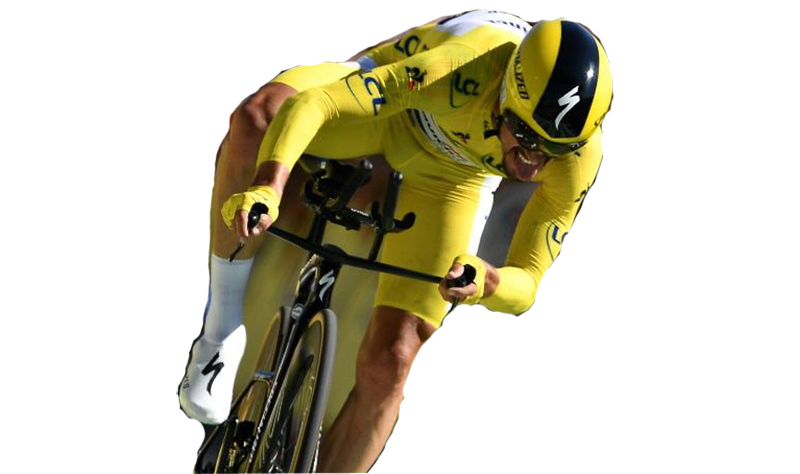 Julian Alapahilippe extended his overall lead at the Tour de France on Friday winning the 27.2km individual time-trial at Pau on stage 13 to keep the yellow jersey and send his home fans wild.

Geraint Thomas was second, the defending champion dropping 14 seconds on the French overall leader to slip to 1min 26sec adrift in the general classification after the race-against-the-clock around the Pyrenean town.

“If he carries on like this he’ll win the Tour,” the 33-year-old Thomas forecast at the finish line.

The Welshman said Alaphilippe’s barnstorming ride had taken him by surprise.

“He’s going incredibly well and is certainly the favourite or the one to watch at the moment,” he added.

“But there is a long way to go and a lot of hard stages to come.”

Sweat was dripping freely from the 2018 champion in the full heat of a baking south-eastern France afternoon.

“I was overheating a bit, It was that last bit that got me, in the last 8km I didn’t have the power I wanted,” he admitted.

‘So loud I could hardly think’

Alaphilippe has been going from strength to strength this season and said he was taking his responsibility to the French fans very seriously.

“I never set off thinking about pulling off this win. Nobody is more surprised than I am,” said the Deceuninck Quick-Step world No.1 who has lit up the Tour with a series of jaw-dropping attacks.

“I just wanted to keep the jersey, but to win the stage, on this form, is just totally amazing,” said the 27-year-old former soldier.Friday was the 100th anniversary of the introduction of the yellow jersey, with Eugene Christophe wearing the first in 1919, the Frenchman losing the lead on the penultimate stage.

A hundred years on Alaphilippe is tantalising France with belief growing they can win a first Tour since 1985, when Bernard Hinault clinched his fifth Tour and who was on hand to congratulate the winner on the podium.

After the 80kph descent outside Pau with the sun making a strobe-like flash effect as it flickered through the trees, the packed holiday weekend crowds went wild as they realised Alaphilippe was keeping pace on the narrow hill roads outside the town.

As Alaphilippe made the 18 percent slope ahead of the home straight the noise was deafening as victory over time-trial specialist Thomas unexpectedly materialised.

Thomas’s Ineos co-captain Egan Bernal finished 1min 36sec off the pace to drop down the rankings and lose his white jersey to Alaphilippe’s teammate Enric Mas, who is now fourth.

France’s Thibaut Pinot lost just 49sec and looked relaxed after climbing to seventh in the overall.

“I held back at first and then let the horses go,” he said.

It was also a good day for Steven Kruijswijk now third in the overall after finishing sixth on the day.

There had been gasps and cries of horror when Belgian rookie Wout van Aert got caught in the barriers and was taken away in an ambulance. Alaphilippe sent him special wishes from the podium.

Saturday’s stage 14 is a short 117km run over two Category 1 mountains with a summit finish at the fearsome classic Tour de France destination the Tourmalet, which some translate as ‘bad trip’ and which is the highest mountain pass in the Pyrenees.

“It’s going to be difficult on the Tourmalet, But I’m not letting this jersey go easily I can promise you that at least,” said Alaphilippe.

Pinot and his FDJ manager Marc Madiot have also vowed to fight on the Tourmalet to gain revenge there for getting left behind in the crosswind at Albi.

“There’s a rage in him, and when the rage is on him he’s good, Saturday we roll,” Madiot told AFP this week.

“It’s the first real battle,” said the much loved Pinot. “And I’ll be there,” he said.