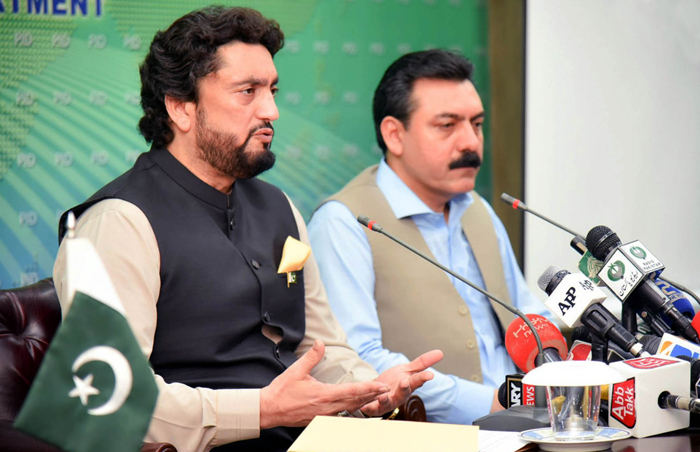 Afghan President’s Chief Advisor on National Security Sarwar Ahmedzai on Friday said that Prime Minister Imran Khan’s upcoming US visit would prove to be key in Afghan peace process and Afghans were looking forward towards his maiden US visit.

Addressing a joint press conference along with Minister for SAFRON & Narcotics Control Shehryar Khan Afridi, Sarwar Ahmedzai said that Afghan government has requested all regional and global partners to play their part in peace process.

“The recent dialogue has been very productive and we look forward to Prime Minister Imran Khan’s US visit,”‘ he added.

Briefing the media on weeklong trip of Afghan delegation, Shehryar Afridi said that that Afghan President Dr Ashraf Ghani had sent this delegation as follow-up of his recent trip to Pakistan to help expedite the decisions agreed between the two countries.

Shehryar said that Afghanistan and Pakistan have opened a new chapter of friendly relations and the peoples of both the countries would not allow the detractors to create misunderstandings through fifth generation and hybrid warfare.

“I also took the delegation to visit Afghan refugee camps in Peshawar and they themselves saw the facilities being provided to the refugees. Since Sarwar Ahmedzai himself lived in refugee camps and his family still lives there, he could better understand the level of facilities being provided to refugees. Let me tell you that the blame game era is over and Pakistan and Afghanistan have moved towards a new chapter of friendly relations,” the minister said.

Afridi said that Sarwar Ahmedzai had met Foreign Minister Shah Mahmood Qureshi and forwarded a request of the Afghan government to open airspace for flights between Delhi and Kabul. He said that Prime Minister Imran Khan immediately approved the opening of the airspace while bank accounts to 1.4 million Afghan refugees have also been allowed on humanitarian grounds.

The Minister said that both the countries have agreed to take all necessary measures to ensure immediate and dignified repatriation of Afghan refugees. He said that since 85 percent of world drugs are being produced in Afghanistan, both the countries have agreed to adopt joint measures to get rid of the drug menace. Afridi urged the world donors to come forward and provide alternative options to the poppy growers of Afghanistan.

Addressing the media, Sarwar Ahmedzai said that his visit to Pakistan was facilitated by Afghan NSA Hamdullah Mohib. He said that on his special request, Pakistan decided to open airspace between Kabul and New Delhi which would greatly help mitigate problems being faced by Afghan citizens.

“I am thankful to Prime Minister Imran Khan. I am also grateful to Shehryar Afridi through whose assistance I was able to convince Pakistan government to open the airspace,” he added.

Sarwar Ahmedzai said that Pakistan had also assured him to review visa facility for Afghan nationals who stand in queues for hours and hours to get a visa for Pakistan.

He said that he along with Shehryar Afridi also visited two refugee camps, Basic Health Units and schools.

“It is heartening to note that with the new administration in Pakistan taking reigns, Pakistan, Afghan relationship is improving. I was happy to see the sentiments of Afghan refugees in the camps. They are happy for being treated well. Shehryar Afridi has been doing a very good job. This is just a beginning and we will keep building on this foundation,” he added.

Ahmedzai said that his delegation was visiting Pakistan for furthering this new bond of friendship.

“Around 10,000 people apply for visiting Pakistan for visa daily. Pakistan has promised to facilitate the visa issuance facilities. We are looking forward to a new relationship with the new Pakistani government,” he added.

Responding to a question about incidents of violence took over soon after Pak, Afghan Cricket Match; Ahmedzai said that Afghan cricket team has learned the art from camps in Pakistan. “Some individual incidents can’t represent entire nation. Pakistan has hosted refugees over forty years which is unprecedented. We value this generosity and Afghans can’t forget it,” he added.

Asked about steps taken to repatriate Afghan refugees, Ahmedzai said that Afghan government has tasked its Minister for Refugees and the land acquisition process for repatriation of Afghan refugees has commenced. This process would continue and things would move on, he concluded.