As the summer holidays begin, where is the ‘yellow vest’ movement?

In a novel called The Ogres’ Happiness(Au Bonheur des Ogres), Daniel Pennac traces the life of a disadvantaged family. In reply to his boss, who has suggested he should not be so emotional, one of the main characters constructs deep inside himself the following answer: “I’m not emotional, I’m a naked bird, sitting on a high-voltage line, and tucking his tail between his paws so as not to touch the wire opposite”. 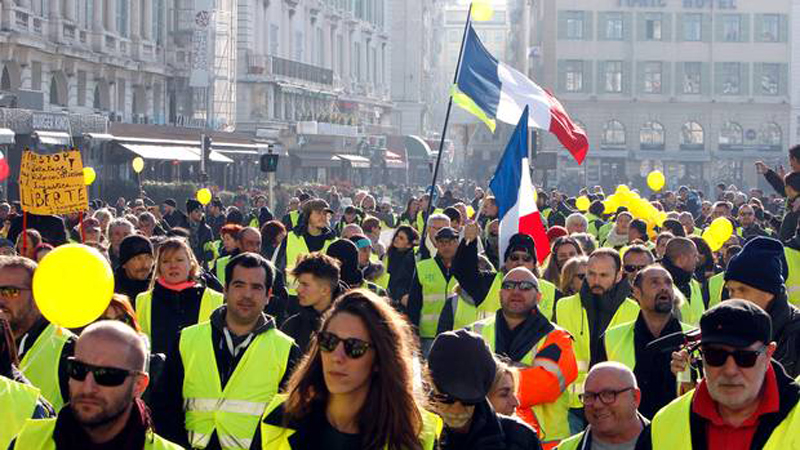 France begins the holiday season that the political class hopes will be the beginning of the end of the ‘yellow vest’ movement, which, on the 33rd consecutive Saturday (June 29) since the start of the movement, were only 5,769 demonstrators out in the streets, according to the Ministry of Interior. At the time of writing, the latter was yet to publish its estimate as to the numbers present for what the movement terms the 34th Act (July 6), but the ranks of demonstrators have thinned out markedly. Could this be the end of a long social movement, as the government hopes? Or just a temporary, tactical retreat until parliament reconvenes, with President Emmanuel Macron planning to introduce reforms that will undermine part of the social progress to which the country remains attached?

Another issue of importance is the extent of violence and repressive measures. Since the end of November 2018, according to government figures, 11 people have been killed, 4,225 wounded, including 1,797 police personnel, while some 12,107 people were arrested.

The instrumentalisation of the concept of populism

Journalists and commentators continue to struggle in their assessment of a movement that, unusually, has sustained its mobilisation in many parts of the country, and that originated in the periphery rather than in Paris. In addition, its detractors have employed derogatory qualifiers, including using that of populist. In their book In the Head of the Yellow Vests,Xavier Desmaison, Damien Liccia and François-Bernard Huygue rightly point out: “What is called populism is basically a feeling of dispossession: as a citizen, I have been deprived of the support of a republican state that protected me and my genuine freedom to participate. I am prevented from voting on what concerns me (or sometimes politicians take decisions contrary to my vote), I have been replaced by opinion polls and focus groups or politicians speak in my name”.

The three authors return to the notion of ‘metacomplotism’ (denouncing plots of conspiracy), while journalists criticise the inability of ‘yellow vests’ to face reality. Towards the end of December 2018, Mounir Mahjoubi, Secretary of State to Minister of the Economy and Finance and Minister of Action and Public Accounts, in charge of Digital, declared in an interview with France Inter radio station that, “First, we saw on TV shows single mothers who explain that it was impossible to make ends meet at the end of each month. I was happy enough to hear these voices; never will politics be as before, because now all the French people have said to themselves: we have the capacity to be heard”.

However, Mahjoubi added, “But there are the others: those who tried to vandalise Paris five times in a row. Yesterday morning’s images were disgraceful. There were screams, rugby chants, animal roars, to scare us… Most disgraceful of all were the smiles that go with these songs: they are happy to vomit on our history and on the French people”.

Thus, to pick up on the analysis of Desmaison, Liccia and Huygue, in response “a new hostility” from below developed “towards the political, economic and media elites, seen as nepotistic, with shared interests, seeking only to perpetuate their own power” and “to deny the seriousness of the situation”. The “holders” of “ideological power”, of course, “never cease to exalt dialogue” but, in reality, “forbid talk about certain realities or use of certain words; their function is to instill conformity, to calm the crowd, to criminalise some groups, to steer away from certain topics and to protect the ideological bubble against reality”.

This umpteenth revolt of those forgotten by history, this time with their emblematic yellow vests, will again be defeated, extending the litany of missed opportunities

Ultimately, “The notions of conspiracy or misinformation would serve the purpose of stifling any alternative hypothesis”.

Zineb Redouane, an 80-year old Algerian citizen, was fatally injured by a tear gas grenade as she closed the window of her apartment. The projectile was fired during a CRS (Compagnie Républicaine de Sécurité, Republican Security Unit) intervention at the foot of her building to contain a demonstration of yellow vests in Marseille. To this day, she is the only victim to have died on the sidelines of a demonstration of yellow vests in an incident in which the role of forces of law and order has been formally questioned.

On December 4, 2018, a judicial inquiry was opened to determine the causes of her death but, seven months later, several grey areas remain. The public prosecutor of Marseille, Xavier Tarabeux, initially stated that the octogenarian had succumbed “to a cardiac arrest in the operating theatre.” He added that “at this stage, we cannot establish a cause-and-effect relationship between the injury and the death.” The autopsy, performed the day after the death at the request of the prosecutor’s office, revealed “a severe facial trauma with fractures”, as well as “costal fractures and acute pulmonary edema that would be the cause of death”, according to a statement of the court of appeal. Another autopsy, this time conducted in Algeria at the request of the court of Dar El Beïda and revealed by Le Media on July 2, does not take as many precautions in its analysis and evokes a “significant facial trauma attributable to the impact of a non-penetrating projectile… which may correspond to a tear gas bullet.”

Towards the end of March 2019, Geneviève Legay, aged 73, was seriously injured while participating in a demonstration of yellow vests in Nice. The victim had an anti-globalist rainbow flag in her hand, and chanted “Freedom to Demonstrate”. A few minutes later, the security forces charged the demonstrators in order to clear Garibaldi Square. “They advanced straight over her, it was very violent”, says the family’s lawyer.

Emmanuel Macron was soon afterwards in the region of Nice, where he was to dine with Chinese President Xi Jinping. Interviewed by the daily Nice Matin, he did not mince his words, “First, I hope that she will recover as soon as possible and get out of the hospital quickly and I wish her family peace of mind… I wish her a speedy recovery and perhaps a form of wisdom.” And Macron, implying that Legay participated in the ‘yellow vest’ demonstrations, added, “To have peace of mind, you have to behave responsibly. When you are fragile and you run the risk of being jostled, you do not go to places that are defined as prohibited, and you do not put yourself in situations like this one.”

Jean-Luc Mélenchon, founder of ‘France Unbowed'(La France insoumise – a tricky term to translate), on the far left of the political spectrum, tweeted:

“Mister Macron, our Geneviève of Nice does not need you to teach her wisdom. You would have a lot to learn from her. She campaigns for the good of others. And you? You hit her in the name of what?”

The xenophobic extreme right, the only defender of the oppressed?

While we wait to see if September brings renewed vigour to the movement, we may ponder with the journalist Edwy Plenel, who recently published a book significatively titled The Victory of the Vanquished, whether:

“This umpteenth revolt of those forgotten by history, this time with their emblematic yellow vests, will again be defeated, extending the litany of missed opportunities, betrayed hopes or tragic stories. But it will have nonetheless already registered an invaluable victory of the vanquished, as ephemeral as it may be. Simply by imposing their agenda on public debate, they have become autonomous actors in their own history and no longer just subjects of a history written by the victors. In other words, they have already opened the door to a history that was previously kept under lock and key.”

Plenel, alarmed by the rise in France of the extreme right that the recent European elections served to underscore, wrote that “the surest way to make monsters take control is to allow them free rein.” Thus, “the xenophobic, racist, anti-Semitic, nationalist or neo-fascist extreme right” enjoys a “monopoly of anger” and the “privilege of contestation.”

And the journalist concludes: “The negation of the event and the mistrust of the people… this desertion was tantamount to selling off the democratic and social heritage of which the struggles of yesterday, revolts and revolutions, had been the laboratory. It would be impossible to claim this legacy if [these struggles] are nothing more than empty words, dead references and obituaries, accompanying an irreversible conversion to the established order, by resignation to its alleged immutability and the abandonment of any imagined alternative.”