The Wizard of Oz teaches us to always remain hopeful 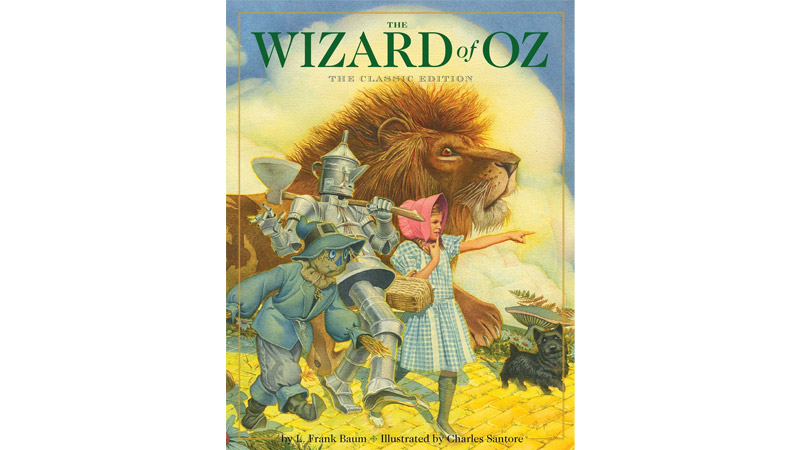 We all agree that there is no place like home. The book under review tells us the same. This book is from United States and it is written by a great author Frank Baum got published on May 1900.

The story revolves around a little girl called Dorothy who lives with her aunt and uncle in Kansas. She spends most of her time playing with her dog. One day they were playing, suddenly a big storm moved toward them and they both ran and went in the room. Next day, when Dorothy cans out with her puppy, she became shocked because she found herself in another land which was called Munchkin Country. There she found many strange people who looked Dorothy and thanked her. Dorothy was surprised when she saw her home has fallen down on a woman. Then the strange people tell her that her home has solved a problem that it killed a cruel witch of East.

Dorothy is informed about three witches out of whom two are cruel and one is good. The cruel witches belonged to the east and west, whereas the good witch is from the south. The people over there are delighted because Dorothy has killed the wicked witch of the east. She feels happy but also longs for home. She took help from those strange people but no one helped her. A man gave her the shoes of witch of East through a price which were magical shoes and gave the address of the wizard of OZ and said that he can help her to be back at home.

The wizard of OZ was in the city of Emerald. Dorothy started her journey along with her puppy. Days passed, she found three new friends in the way. Scarrow who wished a brain, Tin man who wished a heart and lion who wished to be strong with fighting and not scaring. Probably, Dorothy took all of them with her to make their wishes complete. They motivated each other and believed that they could struggle for their wishes. During this, Dorothy felt very much happy but she wanted to live in her own home with her family.

Dorothy is informed about three witches out of whom two are cruel and one is good. The cruel witches belonged to the east and west, whereas the good witch is from the south. The people over there are delighted because Dorothy has killed the wicked witch of the east. She feels happy but also longs for home

On the other hand, walking and walking they reached at wizard house where an old man was sitting who was considered wizard of Oz. Just then Dorothy narrated her problems that she wanted to return back at home and she described the all wishes of her friends. The wizard remarked that he could help them when they fulfil his wish. And his wish was that to kill the cruel witch of West like she killed the cruel witch of the East. Dorothy was shocked that she was a child and how could she help anyone. The wizard motivated her no one could be unsuccessful if he or she wished something to this. Dorothy became ready to kill that witch after which she could get in her home.

Dorothy started her journey with her friends to find the wicked witch of the West. They faced many difficulties to fulfil their wishes or desires. She suffered a lot but every challenge she defeated with her friends who did not give up Dorothy. She tried everything to kill the cruel witch of West because of her achieving her home back. The witch wanted to take her magical shoes which she got from the strange people by the cruel witch of the East. But Dorothy did not give her shoes. They fought with each other and finally Dorothy was successful to kill the witch of West by throwing water on her and she died.

She decided to go back to the wizard of Oz who promised to support them. When they reached there Dorothy became worried because the wizard could not fulfil the wishes of Dorothy and just fulfilled the wishes of her three friends. Dorothy came out from there disappointingly but one of her friends suggested her that there was a kind of witch in South. She could help at any rate.

They started finding the witch of South. They became successful to find the witch very soon and the witch of South loved Dorothy and helped her to be back at her own home which she desired to be back. Dorothy was delighted to for going in her home again. The story ends beautifully with Dorothy reunited with her family, the wicked witch’s death in Munchkin Country and with the freedom of everyone else. This is also a motivational book and encourages us to face all our problems, to believe and never give up.

The Wonderful Wizard of Oz is an American children’s novel written by author L Frank Baum and illustrated by WW Denslow, originally published by the George M Hill Company in Chicago on May 17, 1900.

It has since seen several reprints, most often under the title The Wizard of Oz, which is the title of the popular 1902 Broadway musical adaptation as well as the iconic 1939 musical film adaptation.

The story chronicles the adventures of a young farm girl named Dorothy in the magical Land of Oz, after she and her pet dog Toto are swept away from their Kansas home by a cyclone.

The book is one of the best-known stories in American literature and has been widely translated. The Library of Congress has declared it “America’s greatest and best-loved home-grown fairytale.” Its groundbreaking success and the success of the Broadway musical adapted from the novel led Baum to write 13 additional Oz books that serve as official sequels to the first story.

Baum dedicated the book “to my good friend and comrade, My Wife,” Maud Gage Baum. In January 1901, George M Hill Company completed printing the first edition, a total of 10,000 copies, which quickly sold out. It sold three million copies by the time it entered the public domain in 1956.

The writer is a student and can be reached at shargulmalang@gmail.com