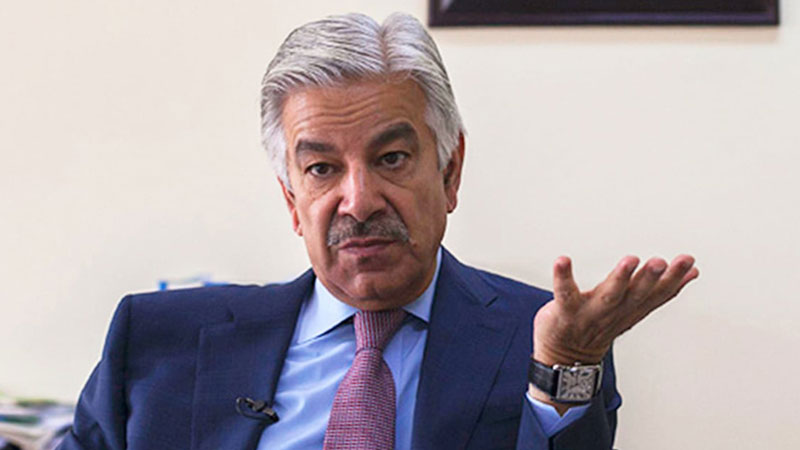 The PML-N leader was referring to the removal of accountability court judge Arshad Malik over the video leak scandal.

“The video of a judge came forward and questions were raised over his judgement. There was a hearing in the Supreme Court today. I don’t want to comment too much on this issue as it is being heard by the court. I respect and have faith in the courts and the judicial process. The judge was removed but Nawaz Sharif remains in prison,” Asif said.

The PML-N leader asserted that there was no allegation of corruption against Nawaz Sharif.

Earlier today, the Supreme Court issued a notice to the Attorney General and asked for recommendations in the video scandal case of Judge Arshad Malik as it adjourned the hearing until July 23.

On July 12, judge Arshad Malik was relieved from his duties by the federal government for his alleged involvement in the controversial video scandal.

Arshad Malik, in his letter to the IHC, alleged he was offered a bribe by Hussain Nawaz. “Nasir Janjua came to meet me and claimed that he had the cash equivalent of Rs 100 million in Euros for me immediately available out of which the Euro equivalent of Rs 20 million was laying in his car parked outside.

“I was told that Mian Sahib is willing to pay whatever I demand on acquitting him in both references. However, I declined the bribe offered to me while committing remains sticking to merits,” he said in his letter

ML-N president and opposition leader in the National Assembly Shahbaz Sharif said the decision to remove the judge and the videos related to the facts regarding his verdict against the former premier were before everyone. In this situation, he said, “the decision against Nawaz Sharif stands null and void after the removal of accountability judge Arshad Malik. Now to keep Nawaz Sharif in jail is illegal.”