The grand old man was 89 when he lost the struggle against his cancer. The news about the demise of Ross Perot Sr. in Dallas came as a shock one is never ready and prepared for losing someone. His son Ross Perot Jr is one of my best friends.

Born in modest circumstances in Texas in 1930, a time when the country was aching under the burden of the Great Depression, Ross, Sr became a self-made billionaire because, as he said once in an interview “he lived the American dream” that dream which so many people dreamed when they left their homes for America to make a fortune. He worked from the age of seven distributing newspapers early morning before he went to school. Graduating in 1953 from the US Naval Academy he served for four years, it was here that he first learned about computers. This sparked an interest that would later make his fortune with two data processing companies which he sold in the 1990s with good profit.

Ross Perot Sr served five years in the US Navy till 1957, opting thereafter for civilian life as an IBM salesman. When the CEO of IBM found out that he was earning more than him because of sales commissions he changed the rules the next year to cap his earnings. Perot Sr reached that cap in the first month. As a salesman, he became acutely aware of the lack of services facilitating operations to the full capacity of the huge computers manufactured by IBM. The ideas he presented to the IBM management were ignored. Frustrated, Ross Sr quit in 1962. With a capital of only $1000 he formed Electronic Data Systems (EDS) and did just that. When Dr Ehsan and I visited he proudly showed us copy of that historical $1000 cheque which is wife had given him as the first investment in the venture. 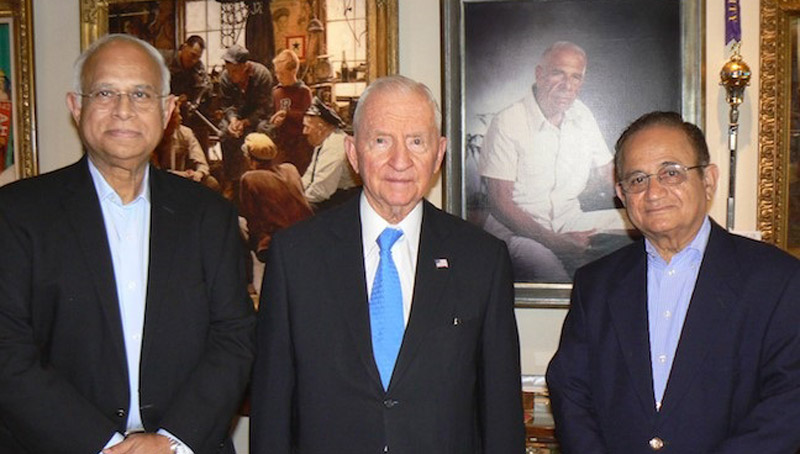 Changed tack later, the irony is that today IBM Global Services is the most profitable part of IBM worldwide. Ross Sr eventually sold EDS to General Motors for $2.4 billion in 1984. He founded Perot Systems in 1988, this was acquired by Dell Systems in 2009 for US$ 3.9 billion. An entrepreneur with vision par excellence, Ross Sr invested US$ 20 million in Steve Jobs’ initiative when he left Apple in a power struggle to found his next success story “NeXT”.

Perot Sr remained grateful to his country and cared for its wellbeing. All the money he made did not make him selfish nor arrogant and indifferent to the fate of his countrymen. Concerned about the treatment of US prisoners of war in Vietnam and attempted in 1969 to organise an airlift to North Vietnam of food and medical supplies for the US PoWs. This did not materialise, the project met not only predictable hostility from Hanoi and Moscow but surprisingly from Washington as well. Perot remained obsessed with the PoW issue long after the Vietnam war had ended, and repeatedly accused successive administrations of failing to secure the return of every prisoner.

In 1978 two employees of his company working in Iran became embroiled in a contractual dispute with the Shah’s tottering regime. Charged with corruption, they were imprisoned, the company was told that it would have to pay $12m to get them released. Deciding that the Carter Administration was too supine about the case and worried about the fate of his employees Perot organised a rescue mission commanded by Col Arthur Simons, a retired Special Forces officer, with himself and other company employees as members. In the chaos leading to the Shah’s flight into exile in early 1979 they could do little at first. Their opportunity came after four frustrating weeks when a revolutionary mob attacked Qasr prison in Tehran and released its 10,000 inmates. Perot and Simons eventually found their colleagues, bundled them into a van and, after a hair-raising journey out of the capital, bribed their way across the Turkish border. The episode inspired Ken Follett’s “On Wings of Eagles” and a television miniseries. His brazen coup to recover his employees gave him national recognition and well deserved accolades. 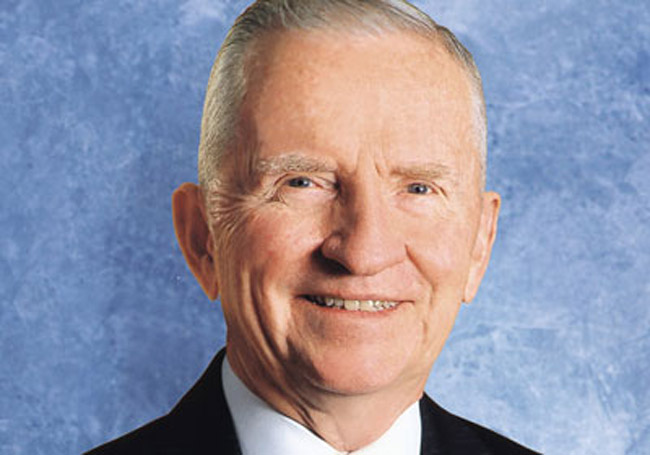 Having never held public office, he announced in 1992 on a talk show that he would run for President as an independent candidate. During his campaign he built a dedicated following with his populist rhetoric calling for balanced budgets and an end to the outsourcing of jobs abroad. He railed against the North American Free Trade Agreement, warning of a “giant sucking sound” of American jobs lost to other, mainly by Asian countries, if passed. He criticized the political system of America. In these he was a forerunner of Donald Trump. Alleging that “neither political party has effectively addressed the issues that concern the American people,” Perot created the “playbook” that Donald successfully followed 25 years later during his Presidential campaign. Perot’s demand of small government and anti-globalism preceded Trump’s policy ‘America first’. Running as an independent candidate in the 1992 US presidential race, he was well ahead with 39% of the electorate behind him, When he inexplicably quit the race in July. When his followers persuaded him to re-enter the race on Oct 1, the momentum had been lost in the nearly 60-day hiatus. Clearly winning the first debate with his candour, Ross Sr finished third at 19% with about 20 million votes in the November elections behind the eventual winner Bill Clinton (45%) and George Bush (37.5%), the best showing by an independent presidential candidate in US history. Giving up all political plans in 1996 Perot took over as President and CEO of Perot Systems Corporation, which he had founded in 1988. Remaining the head of the company until 2000, at the age of 70 he passed the title on to his son, Ross Perot Jr. He still never stopped worrying about his country. With America’s national debt continuing to haunt him, in 2008 he launched a website to track the rising total, trying to raise awareness among his countrymen. The following year he received a special award from the US “Veterans Affairs Department” in recognition of his support for military welfare causes.

The first time I saw Ross Perot Sr was during the graduation of my son Zarrar from Boston University in 1994. The US presidential candidate for 1992 was a most eloquent and impressive commencement speaker. I was fortunate to become close to the Perot family much later when his son Ross Perot Jr, Chairman of the Board of East West Institute (EWI), which i joined in 2004, became one of my best friends. Thanks to Ross Jr I got to visit this great 83-year old (at that time) American in 2013 alongwith Dr Ehsan ulHaq, a very close friend settled in Dallas. Visiting the Perots was both a rare privilege and an eye-opener. Ross Perot Sr took great pride not only describing the amazing collection of historical memorabilia in his office in Dallas Texas but took us around personally on a grand two-hour tour of his vast office. Earlier when Ross Jr said that he would personally take me on a helicopter ride and would put me on the helicopter’s controls, I thought he was joking. Reality did not hit me till I was occupying the left seat of the dual controls of his Bell 407 for over an hour. Even though I did get a Commercial Pilot Licence (CPL) in 1975 and flew fixed wing aircraft till 1978, this was 42 years (1971) since I had last been on any helicopter controls. With Ross as a passenger I was given a helicopter tour of the vast Perot land holdings converted into bustling commercial and residential areas in the farmlands north of Dallas. 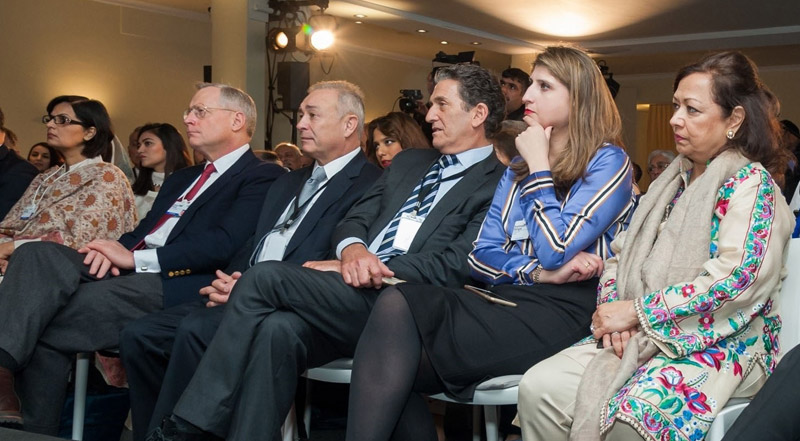 Ross Perot Jr is not just another rich man’s kid. One was struck by both his vision and eye for detail when Ross Jr briefed me on the map at the Perot-owned Alliance Airport. The ‘Circle T Ranch’ mostly comprises Hillwood Estates, an 18,000 acre landholding in its 25th year of development (40 million square feet of developed space). While very much his father’s son, Ross Perot Jr has independently implemented a remarkable and unique entrepreneurial vision along with the family commitment to the bedrock values of ‘integrity, respect, excellence and teamwork’.

While it does not hurt having the Perot name, it is Ross Sr who struck lucky having him as a son. His calm focus on integrated and organised strategic plan of action for the EWI Board made me soon realise that Ross Jr was no ordinary person. Showing early signs of his father’s determination, he had created history by being the first person (along with Jo Coburn) to fly a helicopter (Bell Long Ranger) around the world in less than 29 days at the age of 21. Graduating from Vanderbilt University he served the US Air Force for nearly nine years as an F-4 pilot. How many sons of our billionaires go into the armed forces to serve the country? While we do have Pakistani magnates like Lt Gen Ali Kuli who graduated from Royal Military Academy Sandhurst , currently President of Veterans of Pakistan (VOP), provides Pakistan Ex-Servicemen Association (PESA), who give back in service to the people in gratitude for the opportunity this country has given them, many Pakistani tycoons can (and should) do much more than what they presently do for the country in providing jobs and a better quality of life for the people following his father’s sky trail.. Ross Jr’s son, Hill, flew F-16s in the USAF very like Ahmad Kuli (Ali’s younger brother) who got the Sword of Honour in the PAF Academy.

For me one of the high points of the PAKISTAN BREAKFAST at DAVOS is the presence of Ross Perot Jr in the front row for several years. Both in 2012 and 2013 he was present when Imran Khan only as a prominent Pakistani political leader was the Chief Guest at the Breakfast. His prediction that this man (Imran Khan) will be your PM in the near future has come true. In fact when former PM Nawaz Sharif did not turn up at the last minute in 2015 Ross Perot Jr chaired the Breakfast. Ross Jr’s family and mine had a tremendous time together in the last EastWest Institute (EWI) Director’s Board Meeting in Amman, Jordan a couple of years ago. Ross Perot has no business interest in Pakistan but his that loyal friendship with me tells the story of Ross Perot Jr and his family’s absolute character deeply and unequivocally loyal to his friends and employees till death.

In a statement issued on the death of Ross Perot Sr. the spokesman of the Perot family quite correctly stated, “In business and in life, Ross was a man of integrity and action. A true American patriot and a man of rare vision, principle and deep compassion, he touched the lives of countless people through his unwavering support of the military and veterans and through his charitable endeavours.” Unquote. The Perots of Texas are truly one of the great American families.

My family joins me in heartfelt condolence to Ross Perot Jr and his family at the loss of his esteemed father, a truly great man. This is not a loss for his family, and for mine, but for the US and the world (the writer is a defence and security analyst)