Trump, Imran set to meet at White House on July 22 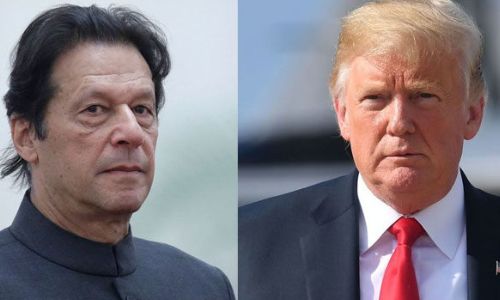 US President Donald J Trump will welcome Prime Minister Imran Khan to the White House on July 22, according to a press statement issued by the office of the White House press secretary on Wednesday.

“During their meeting, President Trump and Prime Minister Imran Khan will discuss a range of issues, including counter-terrorism, defence, energy, and trade, with the goal of creating the conditions for a peaceful South Asia and an enduring partnership between the two countries,” the statement read. “The visit will focus on strengthening cooperation between the United States and Pakistan to bring peace, stability, and economic prosperity to a region that has seen far too much conflict,” it added.

This will be Imran Khan’s first visit to the US since assuming power last year following PTI’s victory in the general elections.

“On the invitation of President Donald J Trump, Prime Minister Imran Khan will visit the United States of America on 21-23 July. This will be the first summit-level engagement between Pakistan and the United States since both leaders assumed their respective offices,” a statement issued by the Foreign Office in Islamabad said. “During the visit, Prime Minister Khan and President Trump will have wide-ranging interaction at the White House on July 22, covering bilateral and regional matters. The prime minister will also be meeting prominent members of the US Congress, corporate leaders and opinion makers as well as members of the Pakistani diaspora,” the statement added.

“During his various engagements in Washington, the prime minister will outline his vision of ‘Naya Pakistan’ and underscore the importance Pakistan attaches to a broader and multi-faceted relationship with the United States,” according to the statement. “In the regional context, the prime minister will underscore Pakistan’s commitment to peace and stability and the importance of constructive engagement to promote a political solution in Afghanistan,” it continued. “He will also highlight Pakistan’s policy of peaceful neighbourhood aimed at resolving disputes through dialogue and promoting the vision of peace, progress and prosperity in South Asia and beyond,” it added.

“The prime minister’s visit will help renew and reinvigorate long-standing ties between Pakistan and the United States,” the Foreign Office said. “It will contribute towards building a broad-based, long-term and enduring partnership between the two countries on the basis of mutual interest and mutual benefit,” it concluded.

At the Pakistan Embassy in Washington DC on Tuesday, Special Assistant to Prime Minister on Overseas Pakistanis and Human Resource Development Zulfiqar Abbas Bukhari had said that Prime Minister Imran Khan’s forthcoming visit to the US is an opportunity to meet with US President Donald Trump, reset the Pakistan-US relationship, and establish a new footing in the bilateral relations.

Responding to a question as to whether the issue of terrorism will be discussed, he had responded, “Pakistan is the largest victim of terrorism … US appreciates the efforts Pakistan has made to eliminate terrorism … historically we have had a good relationship with the US and hope for this to continue.”

Earlier, Foreign Office in Islamabad called for caution against speculations about the Prime Minister Imran Khan’s visit to the United States. Taking to Twitter, FO spokesperson Dr Faisal said, “We wish to caution against speculation about PM’s visit. We are in close contact with the US side.” “As per practice, formal announcements are made at the appropriate time,” he added.

The Foreign Office statement came amidst confusion surrounding the prime minister’s visit to US following State Department spokesperson Morgan Ortagus saying that the White House has not confirmed reports of Imran Khan’s visit. “To my knowledge, that has actually not been confirmed by the White House. I know that I have read the same reports that you have, but I would reach out to the White House to confirm or not confirm that visit,” she told a press briefing.