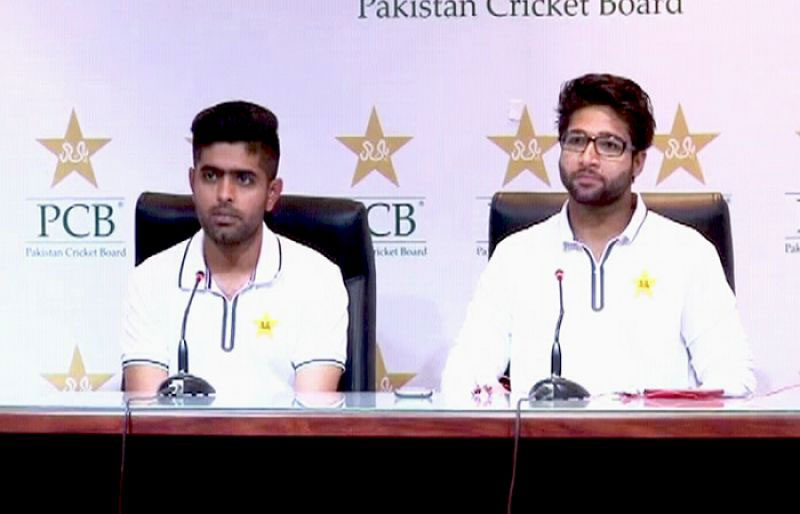 LAHORE: Batsman Babar Azam on Tuesday said Pakistan suffered until the end of the World Cup 2019 because of their loss to the West Indies in their first group stage match. Speaking at press conference along with opener Imam-ul-Haq, Azam said the defeat to the West Indies hurt Pakistan’s chances of making it to the semi-finals of the tournament. With four wins in the tournament, the 1992 champions fell apart in front of the West Indies in their opening match, with the crushing seven-wicket defeat striking a blow to their Net Run Rate (NRR). The Sarfaraz-XI finished level on points with New Zealand but succumbed to a fifth-place finish due to an inferior NRR. Despite impressive wins over the Black Caps and England, the team could not progress to the next round. Responding to a question about the rumours of grouping in the Pakistan camp, Azam said, there was no grouping in the team. “When we lose a match, we start to hear about grouping in the team. We started hearing about grouping after the loss to India. It does not matter who the coach is, our job is to perform,” he added.

Speaking about his record of becoming the highest-scoring Pakistani at a World Cup, the 24-year-old said he was happy breaking a legend’s record. “It is an honour to break a record of legend such as Javed Miandad.” When asked about being handed the captaincy of the side, Azam said, “It is the Pakistan Cricket Board’s (PCB) decision whom they want to give the captaincy. My work is to play cricket.” Responding to another question about the players in the team, Azam said, “No player out of the 15 that went to play the World Cup was a ‘railu katta’. All the players were picked on their performance.”

Speaking on the occasion, opener Imam acknowledged that the Pakistan team should have won their World Cup match against Australia and regretted that his dismal performance in that game contributed to the Green Shirts’ loss. “That match was very much going in our favour and I was set [on the pitch]. But then I got out and Pakistan was let down because of me,” Imam said Imam regretted that his maiden World Cup century hadn’t come in his team’s earlier matches. “At the same time, this is cricket. You have to learn from your mistakes. Not everything can go the way you want it to,” he said. Vowing to improve his performance in the future, Imam noted that the Pakistani fans and the team were “upset” that they were unable to qualify for the semi-finals due to a low net run-rate. “I wanted to contribute more, but that’s life. Humans learn from their mistakes and so will I,” he said. Asked to comment on reports that the selection committee would be dissolved, Imam said his job was only to perform and these matters were for the Pakistan Cricket Board (PCB) to decide.

Imam was, once again, asked to comment on the allegations that he enjoyed the advantage of being the nephew of chief selector Inzamam-ul-Haq, to which he responded: “I only believe in my hard work. My mental toughness has risen a lot now; the allegations do hurt a lot but I take it in a positive way. Where I have my critics, I also have fans and I try to keep my fans happy.” Answering a question, Imam conceded that his strike rate could use improvement, but also stressed that the role he is given by the management is to anchor the overs. He also said there was no questioning the fact that Pakistan’s fielding in the World Cup had been “terrible”, but dismissed the idea that the players were not receiving good enough fielding training. Imam was also asked what impact the presence of the chief selector during the tournament had on the team’s performance. “I don’t think our performance will be improved or worsened by the chief selector accompanying the team during the World Cup or not,” Imam responded, adding that it would be “harsh” to blame Inzamam’s presence for the team’s inconsistent performance in the first five matches.