How Dick Cheney manufactured a case for attacking Iraq

The war drums are beating again in Washington DC. This time the anger is directed at Iran, which is being portrayed as the embodiment of all evil. A cruel and despotic regime governs the country, we are being told, and unless it’s stopped dead in its tracks, the nefarious Ayatollahs will threaten world peace with nuclear weapons. That message may resonate with Riyadh and Tel Aviv but does not resonate anywhere else.

It was not that long ago that a US president lumped Iran with Iraq and North Korea into the Axis of Evil. That was George W Bush, a fumbling president who was catapulted to fame when the US was hit on 9/11. W, as he was called to distinguish him from his father, also a US president, used that phrase to stir up anti-Iraq hysteria in the US. There was no global support for the invasion, not even among the closest of America’s allies. W’s plans to attack were opposed globally. Some 15 million people rallied in protests to oppose the “war for oil.”

How did the US manufacture the case for war in the face of scant evidence? What were the professed goals of the invasion? And what did the US achieve by attacking Iraq? It’s worth revisiting those questions to prevent yet another American president, elected ostensibly on an anti-war platform, from engaging in what might be the worse act of folly in American history. 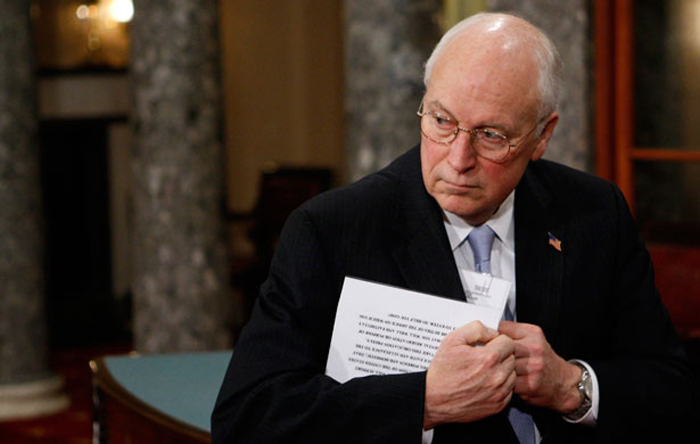 Books have been written about the motives for the Iraq War. And even more about the havoc that the war unleashed. It killed several hundred thousand innocent civilians, unleashed hatred between Shia and Sunni Muslims, gave birth to ISIS, the most ruthless terrorist organisation in recent history, and injured and traumatised millions, in addition to destabilising the entire Middle East.

But most people don’t read books and a few remember what they read. Is there a better way to get the message out? Yes, films have a bigger impact on the public mind because they make tangible the horror and misery of war. Two movies in particular stand out. The first one is Oliver Stone’s W and the other is Vice, co-produced by Brad Pitt. In both, it’s not W who emerges as the evil genius but Dick Cheney, the vice president.

Cheney has been called the most powerful vice president in the US history. He agreed to be the vice president on Bush’s ticket provided he was given considerable leeway in policy making. Otherwise, Cheney said, the VP was only supposed to serve as president-in-waiting, hoping to get executive authority once the president died.

How did the US manufacture the case for war in the face of scant evidence? What were the professed goals of the invasion? And what did the US achieve by attacking Iraq?

Finally, he finds John Yoo, now a law professor at the University of California at Berkeley, to educate him about the Unitary Executive Powers theory. Yoo says that when faced with an existential threat, there are no limits on the president’s authority. He does not need Congressional authorisation.

Cheney convinces Bush to invade Iraq whether or not there is any international consensus on the threat posed by Iraq because 200 million American lives are at stake. When asked during a White House meeting about the exit strategy, Cheney says, “There is no exit. We will stay.” The former CEO of Halliburton had his eyes on the oil fields.

Focus groups were used to find the right message so that the US public would support the invasion. A rich crop of slogans emerged, including: “You are with us or you are with the terrorists.” The US would “Drain the Swamp” by getting rid of terrorists. The US, long known for supporting dictators around the globe and tyrannical monarchies in the Middle East, would now bring “democracy, freedom and liberty” to the region. Armed with these slogans, W roused Congress by singing a hymn to the sanctity of American lives. They gave him a standing ovation.

Thus it was that Cheney and W used the scantest of evidence linking Osama bin Laden with Iraq to convince Americans that Iraq posed a threat not just to their well-being but to their lives. They were convinced that Iraq was buying yellow cake from Africa, and would have nuclear bombs in just four years.

Much of this narrative is well known. But what’s new in the two movies is the assertion that the decision to invade Iraq was opposed by Colin Powell, the secretary of state, who ended up being forced to lie to the UN Security Council about Iraq’s WMDs. It was also opposed by George Tenet, the head of the CIA. Neither believed that Iraq had attacked the US on 9/11 or that it posed an imminent threat.

Sensing an imminent invasion, in August 2002, Brent Scowcroft published an op-ed in the Wall Street Journal. He wrote presciently, “Our nation is presently engaged in a debate about whether to launch a war against Iraq. Leaks of various strategies for an attack on Iraq appear with regularity…[but] there is scant evidence to tie Saddam to terrorist organisations, and even less to the Sept 11 attacks. Indeed, Saddam’s goals have little in common with the terrorists who threaten us, and there is little incentive for him to make common cause with them…The United States could certainly defeat the Iraqi military and destroy Saddam’s regime. But it would not be a cakewalk. On the contrary, it undoubtedly would be very expensive-with serious consequences for the US and global economy-and could as well be bloody.”

Since Scowcroft was the elder Bush’s national security adviser, rumours spread that W’s father was sending a message to his son not to invade Iraq. The editorial annoyed W to no end. Nevertheless, he gave the order to the US to invade Iraq in March. Saddam’s regime fell in three weeks. In the months that followed, a massive search for WMDs was mounted but none were found. It took years to find Saddam. He was tried and hanged. In the meantime, Iraq descended into hell, and many Iraqis began yearning for Saddam’s rule.

The Iraq War ended up costing the US more than a trillion dollars. Nothing was gained. Much was lost. Hopefully the lesson has been learned and the mistake won’t be repeated.