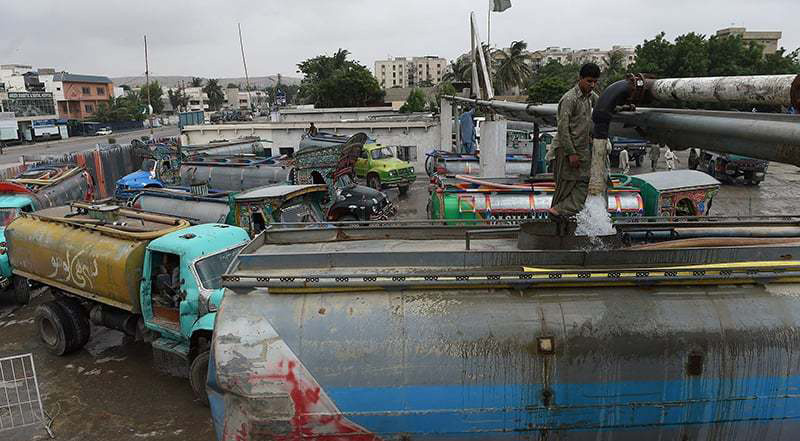 On the directives of Adviser to Sindh Chief Minister on Anti-Corruption Barrister Murtaza Wahab, the Anti-Corruption Establishment (ACE) on Friday launched a grand operation against the gang involved in organised theft of water through tanker mafia at Dhabeji and Haleji.

According to ACE authorities, as many as 21 illegal water connections diverted to personal farm houses, dairy farms, and commercial cultivation in fields had been detected and sealed, as these were illegally operating with the connivance of officers of the KWSB and other beneficiaries, and a sizeable portion of water meant for Karachi had been whisked away as such.

The ACE further revealed that in the same area, through yet another modus operandi, water was being stolen from the main installation of KWSB by tanker owners for sale in the city. As many as 13 uncovered/punctured sites en route to Haleji Conduit were detected and sealed. One water tanker that was being filled from one of the openings was seized and the contractor, along with the driver, was booked.

The authorities informed that a number of such tankers illegally filled water from KWSB installation freely and they faced no checking on account of ‘monthly’ given to local police and water board officers.

The authorities added that in the garb of subsoil water selling, approximately 46 contractors, possessing a fleet of tankers, kept stealing potable water from the main pipeline of the KWSB only to either mix with little of subsoil water or park at subsoil station for further sale in city at highly profitable rates.

The ACE said that the subsoil water taking too was being done without any NOC and regulation. It was just a front to cover water theft from the main trunk of water board line, sources said.

In latter instance, offices of the DC, police and water board were found involved in the crime. ACE officials informed that at least six perpetrators, including 2 XENs of the KWSB, had been taken into custody for interrogation and further action. All illegal hydrants have been sealed at once, they said.