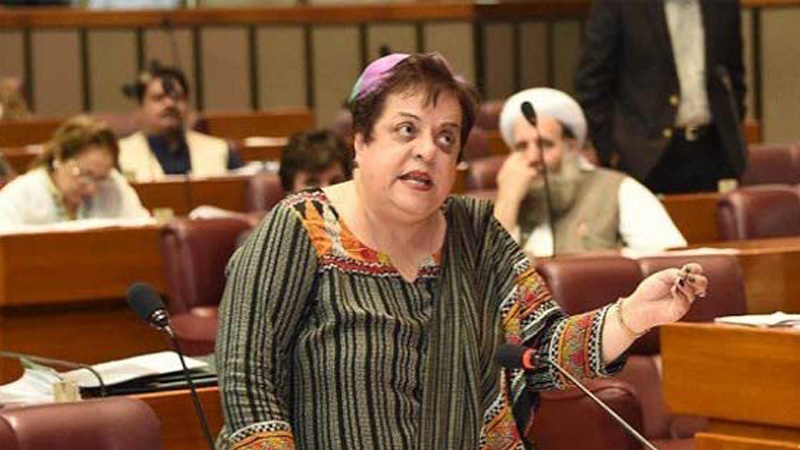 Human Rights Minister Shireen Mazari on Tuesday demanded a parliamentary probe into “criminal negligence” of past governments and bureaucrats for not taking steps to make Pakistan a member of the Financial Action Task Force (FATF).

Speaking in the National Assembly, she said that the financial watchdog had been established by the G-7 countries in 1989 to act against money laundering.

“India became its (FATF) member in 1998 after the constitution of Framework of Monitoring Unit. Since then, India is creating problems for us every now and then,” she said.

“Parliament should conduct an investigation against specific members of bureaucracy, foreign ministers and institutional heads [of previous governments] for not applying for the membership of FATF,” she said.

She said that previous governments did not apply for FATF membership because it would have “exposed their money laundering and corruption”.

“If we were a part of FATF, we would not have been facing difficulties,” she said. Pakistan was placed on watchdog’s ‘grey list’ in June last year for not complying with international standards on Anti-Money Laundering and Counter Financing of Terrorism (AML-CFT). Last week, it narrowly avoided being placed on FATF’s blacklist but only until October.

The international media, while reporting the FATF decision, had noted that “India wants Pakistan blacklisted, which would likely result in sanctions”.

India is currently a co-chair of the joint group of FATF and the Asia Pacific Group (APG), which deals with Pakistan.

During her speech, Mazari also asked for an investigation into non-registration of a bilateral agreement between Pakistan and India, signed in 2008 in United Nations regarding not giving consular access to spies arrested in each other’s countries.

She said that had the agreement been registered in UN, the International Court of Justice would not have been able to entertain the Indian case about consular access to Kulbhushan Jadhav.

“As per international laws, bilateral agreements signed between two countries need to be registered with the UN in order to be recognised by international institutions,” she said.

During his speech, Pakistan Muslim League-Nawaz (PML-N) leader Khawaja Asif on Tuesday said his party did not disagree with the proposal to sign a charter of economy, but regretted that the government had not consulted the opposition before the budget.

The charter of economy was proposed by PML-N president Shahbaz Sharif during the ongoing session of the National Assembly.

“If a voice from our party called the [charter of economy] mazaaq-i-ma’eeshat (making a mockery of the economy), it was because of the current situation,” he said.

He was referring to a recent press conference hosted by PML-N vice president Maryam Nawaz, during which she had said that there can be no agreement with the incumbent government, which she accuses of “stealing the people’s mandate”.

“A new financial order is being introduced that we disagree with. Wouldn’t it have been better if we had reached a consensus before the budget?”

He said that PML-N leader Nawaz Sharif had proposed the idea of a charter of economy a decade ago and said that his party supported it in principle. He regretted that there was “no meeting point” between the government and the opposition.

“Let’s first create a meeting point between the treasury and the opposition on the budget. It would be a start, a good start, and its end point can be a charter of economy,” he said.

Addressing the NA, Khawaja Saad Rafique said that the charter of democracy should be extended before a charter of economy was signed. “In order to sign charters and agreements, to run the country, political temperature of the country needs to be lowered,” he said. “Charters are not signed with a gun pointed at your head.”

He criticised the proposed increase in income tax and said that the budget would burden the salaried class. He said that granting income tax officials the power to raid people’s houses might lead to an increase in corruption.

“Would it not lead to a flood of corruption? Or is corruption only limited to politicians?” he asked. “Are you aware of the effects of granting powers to [income tax officials] to enter people’s houses? The entire nation will suffer [from them].”

He said that the government would not be able to increase tax collection by raising the tax slab to 35 per cent, as is proposed in the budget. He regretted that the government had reduced spending on education even though the ruling party had promised in its manifesto that it would work on the sector.

He said that he had seen jails multiple times in his political career. “In coming years, people from the treasury benches will be jailed, they don’t know about it yet, the democracy is in danger today. Those who can’t understand it should come out of their misconception that they can easily complete their five years’ tenure,” he said.

Minister for Science and Technology Fawad Chaudhry criticised previous governments and said that there was a time when PML-N and the Pakistan People’s Party (PPP) had earned votes by accusing each other of robbing and looting the country. “Prime Minister Imran Khan’s election into power had changed the whole scenario,” he said. Speaking in the National Assembly, Federal Minister Faisal Vawda said that action must be taken against corrupt politicians. “We should hang 5,000 people to transform the future of 220 million-strong nation,” he said. Vawda said the corrupt and money-launderers should be tied and dragged behind a vehicle before being hanged. Vawda said he had made the demand for upholding the supremacy of rule of law, which, he added, would change the fate of all Pakistanis. “Those who are labelling me as fascist… have they forgotten the Model Town incident,” the PTI lawmaker said, referring to the 2014 incident in which 14 people were killed and 100 others injured in a clash between supporters of Pakistan Awami Tehreek and police. Vawda, who defeated former Punjab chief minister Shehbaz Sharif from a Karachi constituency in the 2018 general elections, said the PML-N president should challenge the results if he believed the poll was rigged.