Pakistan envoy lauds recent round of US, Taliban talks 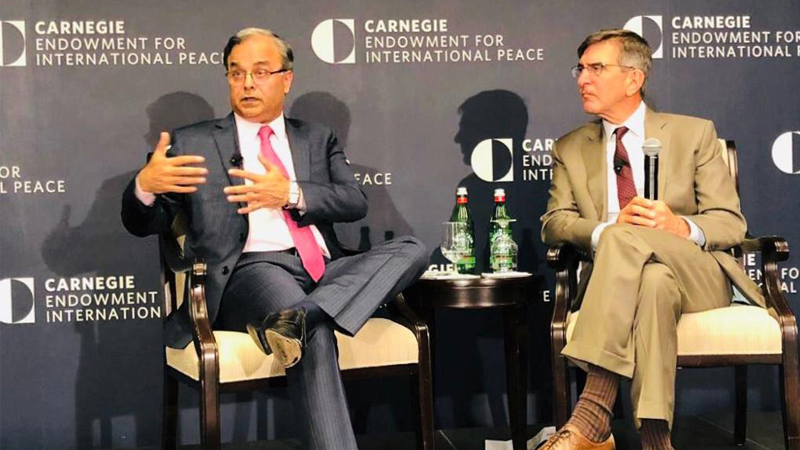 The Pakistani ambassador to the US lauded efforts of the new round of peace talks between the Taliban and the United States, on Monday, a day after both sides resumed negotiations in Pakistan.

Speaking at an event at the Carnegie Endowment for International Peace, a think tank in Washington DC, Ambassador Asad Majeed Khan said: “If you had asked me this question 6 months or 8 months ago, frankly, I could never have actually guessed that there will be a day where the US and the Taliban will spend 16 days in a room talking about peace.”

“Pakistan is making a serious and sincere effort to support the peace process in Afghanistan,” he said.

He highlighted the “shared responsibility” as peace talks resumed in Pakistan over the weekend. “This is not just for us, it is a shared responsibility with other countries in the region,” Khan said. “During the peace process, Pakistan will not allow militants to use Pakistan’s territory to launch attacks or try to use territory in Afghanistan against Pakistan. The country does not want to bring the Afghan war into Pakistan,” he said.

His comments come after Zalmay Khalilzad, the US special representative for Afghanistan reconciliation, announced Sunday, the seventh round of talks between the Taliban and the US would take place on Saturday, June 29 in Qatar.”I believe all sides want rapid progress,” Khalilzad tweeted. Also with the arrival of dozens of Afghan negotiators and senior Pakistani officials over the weekend in Bhurban, Pakistan, who gathered to negotiate how peace can be achieved in the war-torn country.

Since October 2018, negotiators from the US and the Taliban have been striving to reach a peace agreement to end the nearly 18-year-long Afghanistan conflict -what has now become the longest war in US history.

However, it is only more recently that progress towards peace negotiations has been made. A draft agreement was reached in March on the withdrawal of US and NATO troops in exchange for the Taliban agreeing to relinquish ties with terrorist organizations like al Qaeda.

Talks have been turbulent since 2015, when Pakistan organised the first historic round of direct talks between the Afghan government and the Taliban. However, the negotiations broke down after the Taliban announced the death of their long-time leader Mullah Omar, which instigated a power struggle within the group.

Then following the death of Omar’s successor, Mullah Mansur, in a 2016 US drone strike on Pakistan’s side near the Afghan border, any hopes of resuming the impeded peace process slimmed further.

Since taking the US helm in September last year, Khalilzad has held around six rounds of talks with the Taliban. But the Taliban have continued to resist talks for the peace process – insisting their demands for a ceasefire in Afghanistan are met. With Washington in recent months ramping up efforts, including direct talks with the Taliban — in a push to bring an end to the conflict in Afghanistan — despite harsh criticism from the Afghan government.

The Taliban has thus far refused to negotiate with the Afghan government in Kabul, calling President Ashraf Ghani’s administration a “puppet” of the US, with none of its members attending a conference hosted by the Pakistan government on Saturday that brought dozens of Afghan political leaders together.

On Monday Khan urged both sides to come together.

“We also believe that without there being a comprehensive intra-Afghan dialogue we will not have sustainable peace in Afghanistan,” Khan said.