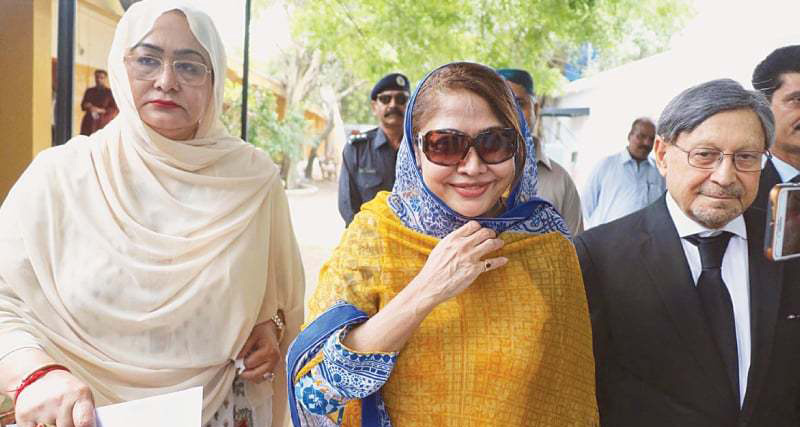 An accountability court in Islamabad on Monday extended the physical remand of Pakistan People’s Party (PPP) leader Faryal Talpur till July 8 in a money laundering case.

The National Accountability Bureau (NAB) Rawalpindi was allowed to further interrogate her for 14 more days.

During the previous hearing on June 15, the court had sent Talpur on a nine-day physical remand under the custody of NAB Rawalpindi until June 24.

An investigation team, including women investigators, has been interrogating her at Zardari House, Islamabad, which was notified as a sub-jail by the NAB chairman earlier “for the purposes of detention of accused under the NAO, 1999”, according to a notification issued by the accountability watchdog.

The court was told that suspicious transactions of billions of rupees had been made in the bank account of the Zardari Group from the fake bank accounts, and the account had been operated by Talpur.

Moreover, she had signed for a transaction(s) in the account with the name of Owais Muzaffar, the court was informed. After appearing in the court, Talpur, while responding to a question by a reporter, had said: “I leave my case to the Almighty.” In her reply to another question over whether she believed her arrest was made on political or accountability purpose, she said: “Couldn’t you understand my arrest was made on political purpose? Everyone knows that these arrests are political.”

NAB has been investigating several corruption cases against former president Asif Ali Zardari and his sister.

The Pakistan Tehreek-i-Insaf (PTI) on Monday approached the Election Commission of Pakistan (ECP), seeking disqualification of Faryal Talpur as member of the Sindh Assembly.

PTI MPAs Haleem Adil Sheikh, Arsalan Taj, and Rabia Azfar submitted a petition to the Provincial Election Commission Sindh, requesting it to disqualify Talpur as member of the provincial legislature over her alleged involvement in the fake bank accounts case.

Speaking to the media, Arsalan Taj said the PPP MPA amassed assets disproportionate to her sources of income and concealed them from the commission. They had submitted a reference to the Sindh Assembly speaker for her disqualification, but no action had been taken.

Haleem Adil Sheikh said the PPP had become a party of thieves and looters. Last week, Arsalan Taj had submitted a reference to the Sindh Assembly speaker, stating that the PPP MPA had not declared her three properties in her nomination papers, requesting him to action against the lawmaker under the article 62 (f) of the constitution of Pakistan.