Back to work after three days in coma, 20 months on bed – a tale of photojournalist 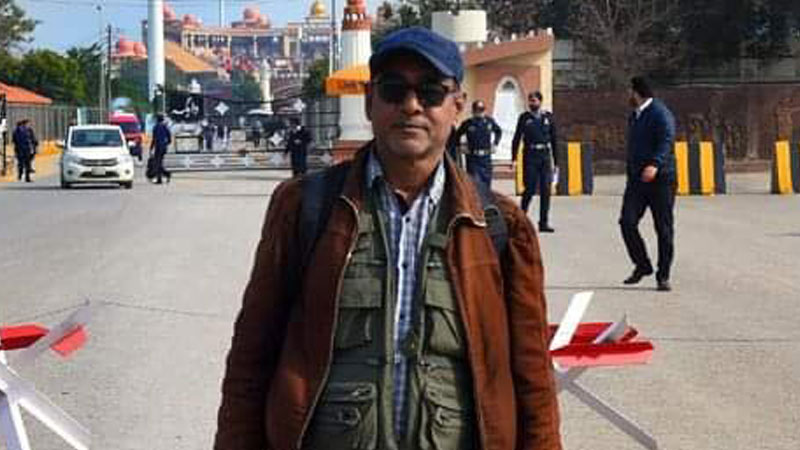 Whenever he leaves home for work every day, photojournalist Arif Ali’s wife bids him goodbye, saying ‘stay safe’ before closing the door.

Apprehensions in her voice are hard to ignore.

This ritual has been going on since 1999 when Arif resumed duty as photojournalist with The News after being bed-ridden for almost 20 months.

He remained under treatment after his abdomen was ripped apart in a bomb blast at the Lahore sessions court on January 18, 1997. He was on the court premises to cover the proceedings of banned sectarian party leaders Azam Tariq and Ziaur Rehman Farooqui when a remote control bomb, fitted in a motorcycle, exploded claiming 25 lives instantly, and scores other injured. Arif along with five other journalists was wounded in the blast for they were close to the site where the motorcycle had been planted.

“Her words continue ringing in my heart throughout the day, and I try to keep safe while being on duty,” he sighs.

In fact, Arif tries to teach safety tips to his other photojournalists as well, which he learned in a series of workshops on safety of journalists, held by AFP, in Islamabad in 2001. He says many of his colleagues are not aware of the importance of safety training, as neither media houses nor the government focus on this important aspect.

Arif admits he himself did not know much of the safety techniques on the fateful day of the blast.

“When the bomb exploded outside the courthouse, I was just 10 feet from the detained leaders, the main targets,” he offers details of the blast day.

Those were the days when security checks, such as walkthrough gates, body frisking and metal detector frisking on court premises were not in place.

“Yes, those were peaceful days,” he smiles. Litigants, lawyers and officials would park their motorcycles and vehicles by the gate of the boundary wall of the court premises.

“The bomb was hidden in a motorcycle parked outside the court, and it detonated as Ziaur Rehman Farooqi, leader of the Sipah-i-Sahaba Pakistan group, arrived for a court appearance. We were six photojournalists who were covering the case. All of us were in the close proximity of the main target, pushing each other for a vintage point to get the clear picture of the leaders,” he stresses his mind to come up with the minute detail of the incident.

When the bomb detonated, Arif Ali’s camera was ripped into pieces. He was then 34.

“A young and strong Arif Ali survived the explosion. I didn’t fall down. My senses remained intact. I saw many people falling, bleeding, crying and dying. I remember I noticed that my both legs and arms were bleeding because of wounds. I remember that after few minutes some police officials bundled me into their vehicle. Then I passed out.”

“Three days?” he almost shouted, he says. He felt he was unable to speak and move.

“The nurse smiled and said, ‘Sir, you’ve cheated death. Yours surgery was complicated but thank God, you’re back to life.”  He was unable to thank her because he could not speak or move. He uttered the first word after 10 days. In these 10 days, his family, friends and doctors would communicate with him through words or his favorite thing – photo.

He suffered deep wounds in his abdomen which he did not notice immediately after the blast. In the days to com he learned that their colleague ZA Shahid from Roznama Khabrain had died in the blast. “I was too weak to cry, but I could not sleep for many days. ZA Shahid was nicely dressed on that day as he had joined the job just a few days ago, and he would wear new suit every day to celebrate the job. He was very handsome. I miss him every day,” Arif Ali choked his tears while remembering the deceased colleague.

The other colleagues injured in the blast were: Abid Hussain from Nawa-i-Waqt, Riaz Ahmed from Aaj Kal, Nadeem Ahmed from Pakistan, and SA Raza from Jang. They were also treated at the Mayo Hospital, however, they were discharged within days or a week. Arif Ali was discharged from the hospital after one month because of the severity of his health condition. For next six months, he was put on medication and regular visits to doctors. For almost 20 months he remained bed-ridden because of wounds in his legs.

When he was at hospital and home, his colleagues would regularly visit him.

“Their visits energized me. I felt I’m not left alone. Their visits, in fact, helped me recover fast.”

During the times of test and trial, his organization kept on giving him salary on time.

“Now, I think no organization tolerates such a long absence of a worker from work regardless of the condition of the staffer. They tend to fire them; they think a staffer, injured in the line of duty, or fatally sick is burden.”

Besides his colleagues, Lahore Photojournalists Association and Lahore Press Club office-bearers also kept on visiting him.

The Civil Lines police say initially no one claimed responsibility for the blast that left over 50 people injured. Later, they arrested Mehram Ali at the premises, who later confessed to planting the bomb and detonating it with a remote control. In the blast, Farooqui and his deputy Azam Tariq were injured when on their way to trial on charges related to the murders of rival sect leaders. Within hours, Farooqui died in the hospital after the blast, and Tariq was seriously wounded. The police say that Arif Ali’s name from challan was deleted after he refused to appear in the court for statement. The police say the case was the first one which was trialed under the Anti-Terrorism Act and convict Mehram Ali was sentenced to 23 death terms in September 1997.

Arif Ali says he avoided litigation in the case because the case involved sectarian parties, and his statement in the court could have created further problems for him and his family. The Punjab government awarded him and other photojournalists injured in the blast with a Rs15,000 compensation each.

When Arif Ali joined the office after 20 months, his then news editor Waqar Mustafa said to him that his career was over but not the job.

“He said that I shouldn’t go to field anymore because of my health condition. But it doesn’t mean that Im going to be fired.”

But sitting idle at office was more painful. By and by, he started going to field and regained his lost pace.

This time, he, however, discovered a different Arif Ali within him at work.

“Earlier, I would run here and there for a vintage position to get the best photo; now, I keep my safety first.”

He joined AFP in 2001 and their trainings helped him improve his safety skills.

“At work, I don’t mingle with crowd. I remain at either left or right. At the place of clash, I first look for cover, and then turn to camera. This is what I tell my other colleagues as well.”

In 2007, he was covering a lawyers’ demonstration at the GPO Chowk in Lahore when a clash between lawyers and police ensued.

“I took cover behind the wall of the high court. This not only protected me from shelling and stampede it also gave me an advantage to focus on both clashing sides. These photos earned a centerpiece in Times magazine and a flurry of awards.”

Pakistan is a place where journalists come under attack for their work. According to the Pakistan Press Foundation, since 2002, 48 journalists were killed in target attacks and 24 for their work till 2019. Another 171 suffered serious assault and 77 minor assaults. Also, 18 got arrested, 26 detained and 36 booked in different cases.

According to the information obtained from the Pakistan Information Department, a draft of Journalists Safety, Security and Protection Bill, 2018, is under discussion that allows aid to the families of journalists and media houses employees who are killed while on duty and also ensures the investigation of crime or threats against journalists.

Special Assistant to Prime Minister Dr Firdous Ashiq Awan says the government is going to announce its media policy in the next few weeks. The media policy will come up effective measures regarding the protection of journalists.

Famous journalist and media educator Mubashir Bukhari, who holds journalists’ trainings with the cooperation of US universities said world leading agencies like AFP, AP, Getti Images stressed their journalists to keep their safety supreme, and not beating the race to land their photo or news first in their newsrooms. “It’s unfortunate to see that Pakistani media houses often push their workers to break the news even putting their lives at risk,” he said.

Punjab Union of Journalist leader Adnan Lodhi says that photojournalists remain vulnerable in the cases of stampede, riot, police baton charge, blast, fire and exchange of fire. All media houses should have hefty insurance schemes for them. Lahore Press Club governing body member Imran Sheikh, who himself is a photojournalist, says that the press club welcomes the bodies which want to train journalists on safety.

Arif Ali, who used to be a hardened because of the nature of his job, is now an emotionally weak person.

“Whenever I see bloodshed, I cry. And from 2007 till date, while covering bomb blasts, fire, accidents and riots, I’ve cried plenty of time.”

Every time he cries, he feels relieved.

This story is the part of Pakistan Press Foundation Fellowship.