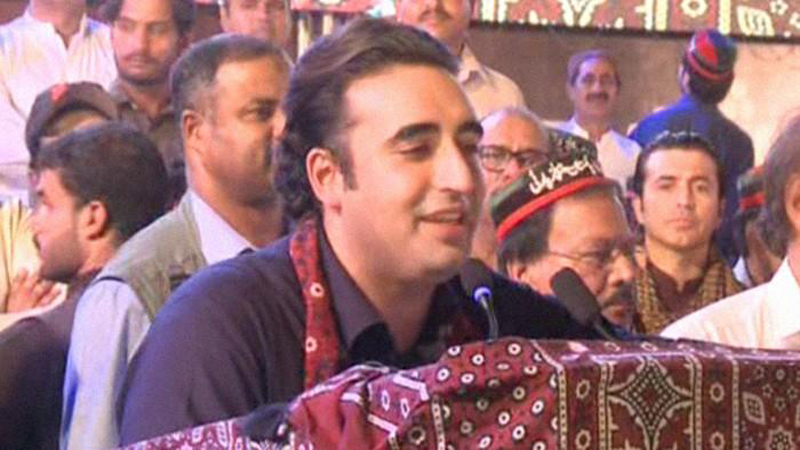 Pakistan People’s Party (PPP) Chairperson Bilawal Bhutto Zardari on Friday said that most of the challenges facing the country could be resolved through reciprocal reconciliation – the philosophy of his late mother Shaheed Benazir Bhutto.

He was addressing party loyalists at a gathering held to commemorate the 66th birthday of former prime minister Shaheed Benazir Bhutto.

“Problems and difficulties facing our country and society can be overcome if the philosophy of Benazir Bhutto is applied in letter and spirit. It is the need of the hour that issues and conflicts should be resolved through reciprocal reconciliation,” he said.

“We reject this puppet government. We reject media censorship. We reject controlled democracy. This failed government has destroyed the country’s economy,” he said.

The PPP chief warned Imran Khan to be prepared for facing the same actions as he now took against opposition leaders.

“Do exactly as much as you can endure. You should pray that my father Asif Ali Zardari comes to power next because only he does not exact political revenge. You exactly know what you will face if the Pakistan Muslim League-Nawaz (PML-N) happens to come to power. Also remember, you’ll be stoned if Maulana [Jamiat Ulema-e-Islam-Fazl (JUI-F) chief Fazlur Rehman] comes into power. Khan sahib, you are a 70-year-old. I am a 30-year-old young man,” he said.

The PPP chairman said before coming into power, Imran Khan used to say he would make the opposition cry. “However, I happily bade farewell to my aged father when he was taken to jail. My father was also smiling at that time. Only my younger sister, Aseefa Bhutto Zardari, was tearful. Khan sahib, I’ll make you pay for my sister’s tears,” Bilawal said.

He said that the government expected to silence the PPP leadership through threats, intimidation and fake cases.

“We will never bow down or be bought through bribes. The loyal workers of Shaheed Benazir Bhutto will defend the 1973 Constitution till their last breath. Khan sahib, don’t you forget that I am the nephew of Shaheed Mir Murtaza Bhutto. Only cowards target women and the elderly,” he said.

Bilawal also expressed the belief that Asif Ali Zardari would again be honourably acquitted of all charges.

“In the past, Asif Zardari was offered the premiership for deserting Shaheed Benazir Bhutto’s side. He refused and remained behind bars for more than a decade. His youth was snatched away from him. However, he emerged victorious after being exonerated in all cases,” Bilawal said.

He said that Benazir had served the country till her last breath and had spent her life struggling for the rights and enlightenment of the people. “Ever since she stepped into politics, she was targeted but she faced everything bravely,” he said. The PPP chief further said that Zardari was being targeted for fearlessly carrying on the mission of his mother.

He announced that the PPP would start a mass-contact movement and then launch protests against the government.

The 66th birth anniversary of former prime minister and Pakistan People’s Party chairperson, Benazir Bhutto, was observed across the country on Friday. PPP workers arranged functions to mark the day.