CJP dismayed over ruckus in NA, economy being in ‘ICU’ 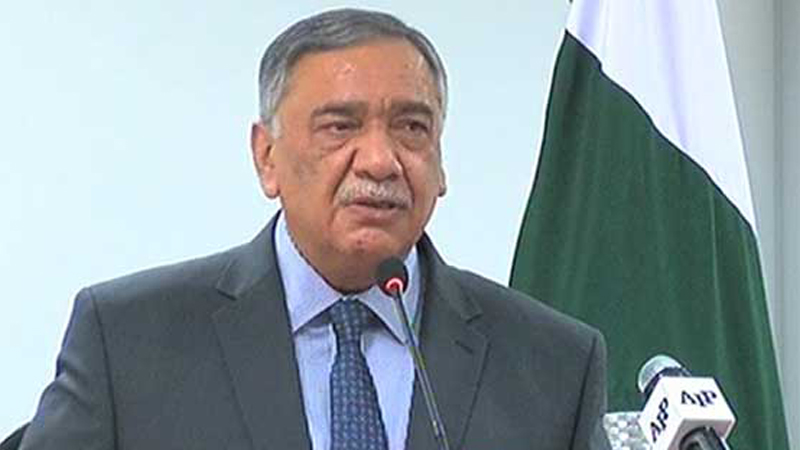 Chief Justice Asif Saeed Khosa on Wednesday expressed his disappointment over the continued ruckus in the National Assembly by the treasury and opposition members, a private TV channel reported.

Speaking to the judicial officers of the Islamabad model courts, the chief justice said that he feels depressed when he sees that the members don’t let even Prime Minister Imran Khan and Opposition Leader Shehbaz Sharif speak in the parliament. “I change the channel to avoid it and watch cricket world cup, but unfortunately again the news is depressing,” the chief justice remarked.

The top judge said he also feels disappointed over the situation of the economy in the country. “Some say it is in ICU, others claim that it has just come out of the ICU. Irrespective of the fact who is responsible for it, we aren’t hearing good news from there as well,” he said.

In his address, the chief justice claimed that judiciary is the only sector which is performing as per the expectations of the people. “Now in this depressing atmosphere, I am very happy to say that at least there is one sector in our society from where some good news is coming. That good news is the realisation on our part. As the relevant organ of the state and incharge of dispensation of justice, it is our constitutional responsibility to provide inexpensive and expeditious justice. This is a gigantic task,” he said.

Chief Justice Khosa announced that the judicial sector will be making use of artificial intelligence (AI) technology to facilitate dispensation of justice. Recounting reforms and changes that have been introduced in the judicial sector for the purpose, he said, “In addition to the introduction of e-courts, we are tapping into artificial intelligence. We have already contacted bodies that deal with AI, we have held meetings [with experts] on how to use it.” He said that historical records of cases and their judgements will be uploaded to a database accessible to judges everywhere.

The chief justice said a state-of-the-art research centre has already been established at the Supreme Court for the purpose, adding that some infrastructure has been put in place, a search engine has been installed and a few more will be installed in the near future. Furthermore, he said, three judges and seven researchers will be going to the United States to further study the system.

The chief justice said that in the first phase, the AI system will be installed under which any judge in any location in the country will be able to input the facts of the cases they are hearing into the database and receive information about similar cases and what their judgements were. “In the next phase, the judges – before deciding their cases – will be able to receive suggestions from the database on what a judgement could be. The system is meant to assess the provided facts, process the information on the basis of already available data of settled cases, before suggesting a possible decision,” he said. “If the decision suggested by the system is different from the judge’s own conclusions, at least the judge will be cautious about his verdict,” he said, expressing hope that the process will encourage judges to reflect on their decisions and make better judgements using the information accessible to them. He said all the judges in the country will be able to access the central research centre at the apex court.

Talking about the e-courts, he said that apex court judges have begun hearing cases via video link. All the cases heard this way so far have been decided, he said, adding that both lawyers and their clients are pleased with the initiative as it has drastically reduced the time and money spent on deciding such cases.

The CJP said civil disputes should be solved but priority should be given to the criminal cases as people are languishing in jails for years in criminal cases. “The prisoner may be the only bread winner of the family. In his absence, there is no source of income in the family and children without a father cannot go to schools and they are also physically abused. In such cases, no one is there to look after them and they are ultimately driven to do crimes,” he said.

He said after due deliberation, steps were taken to improve the judicial system and the results are unbelievable. “Some 5,800 trials have completed in 48 days … this is absolutely unbelievable. This has been done with dedication of judges and full support of the society,” he said, adding that every month one judge will be added to every district to make the criminal justice system better.

The chief justice model courts will soon be established to hear cases related to torture and sexual harassment. He said priority of the judiciary is to provide justice to the people without delay, adding that no case is delayed in six districts of Pakistan and in the next few months, 10 more districts will have model courts. He said pending cases related to murder and narcotics will soon end in 10 districts of Pakistan.