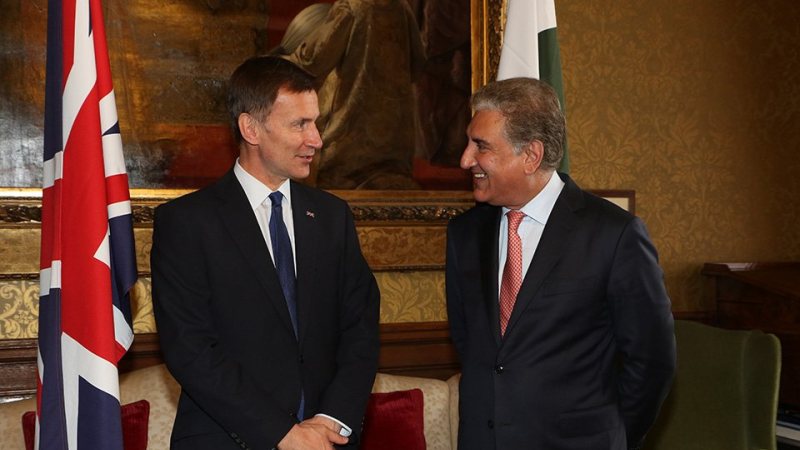 Speaking at a joint press conference with Foreign Minister Shah Mahmood Qureshi at the Foreign and Commonwealth Office (FCO), Hunt confirmed they had discussed an extradition treaty between the UK and Pakistan.

Both the British foreign secretary and Qureshi answered questions put to them by media about the extradition treaty as well as the Financial Action Task Force (FATF).

In response to a question, Hunt said: “Let me say it straightforward. No extradition treaty the UK will ever sign allowing for the politically motivated extradition.”

Shah Mahmood Qureshi added: “We don’t want to use extradition for political victimisation; we feel that extradition [treaty] is important.”

“We discussed with the foreign secretary the impediment in signing this treaty, which was capital punishment. We have resolved that by making amendments in Pakistan’s Penal Code. We have taken the decision of making amendment in that.”

“This will not be misused, but there is an environment which needs to be discussed and concluded,” he added.

Separately, Qureshi appreciated the UK government’s approach on the FATF.

“We had a constructive discussion on the FATF. [The UK government] have stated very clearly that they would not like Pakistan to be pushed in the blacklist.”

“In fact, they would want to help us – and we help ourselves – by getting us out of the greylist and we have a clear approach on how to cooperate on that front. The UK delegation has been very supportive in Orlando,” the FM said.

The British foreign secretary also commented on the bilateral ties between the UK and Pakistan, saying the personal connection the two countries had was truly extraordinary.

“We had [a] very good discussion about the bilateral trade, cooperation in multilateral arenas, regional tensions, and working together to reduce them.”

“The secretary of state for the international trade has increased the support for Pakistan from up to £400 million to £1 billion,” he said, adding he was delighted that British Airways recently restarted their services from London to Islamabad.

Hunt noted that Pakistan and the UK have been great friends for many years and “today is the reaffirmation of that friendship”. He had met Qureshi on many occasions, he added, underscoring that he enjoyed “excellent working relationship with him”.

Qureshi reiterated that both sides had a great discussion on regional issues and how the “The Pakistan Tehreek-e-Insaf (PTI) government played a role in defusing a tense situation after Pulwama attack and how this government has played its role in tackling issues of money-laundering, terror-financing, FATF and where Pakistan stands on all these issues.”

Qureshi said there was a huge potential between the countries.

Hunt said he was “very encouraged to see strong commitment of tackling corruption by the Pakistan government, the progress made on FATF, [and] additional progress that can also be made in that area.”

The foreign secretary said there was a “very clear recognition from the Pakistani government that the only way for Pakistan to progress is to do more to tackle this scourge of corruption and I think a lot of progress has been made.”

Qureshi said the PTI had a clear view of tackling corruption, that he understood how important it was, and that it was the PTI’s view that stolen assets should be recovered. He added that his government wished to eliminate corruption through across-the-board accountability.

“Stolen assets should be recovered. We have an assets recovery unit [ARU] functioning in Pakistan. The government is doing whatever it can to deal with the menace of corruption.”

A statement of Pakistan High Commission issued on Wednesday said that on the occasion, they noted that there were great opportunities, which needed to be exploited to realize the true potential and add substance to the relations, particularly in the fields of trade, investment, tourism, health and education between Pakistan and the United Kingdom.

The Foreign Minister is currently in the UK at the invitation of Foreign Secretary Rt Hon Jeremy Hunt MP, for the 4th review of Pakistan-UK Enhanced Strategic Dialogue (ESD).

Recognising enormous contributions made by the Pakistani diaspora in British politics and economy and their linkages in both countries, they agreed to further strengthen bilateral economic ties.

The two leaders also agreed that people-to-people contacts, business and cultural cooperation should be enhanced.

Foreign Minister Shah Mehmood Qureshi apprised Sir Vince Cable on the people-centric agenda of the government, which were underpinned by human development through investments in the social sector.

He also briefed on the economic opportunities, Special Economic Zones (SEZs) and highlighted Pakistan’s geographic importance to serve as the natural economic hub and energy corridor for the region.

Both leaders also agreed to work together to promote mutually beneficial relations.

Qureshi said that the government was fully committed to the welfare of the people and had taken necessary measures in this regard.

He said that structural changes in the economy would lead to sustainable economic growth.

Terming them ambassadors of Pakistan, the foreign minister commended the constructive role played by the expatriate community in the socio-economic development of the UK as well as Pakistan.

He said around 1.5 million strong Pakistani diaspora in the UK was a vital link between the two countries and gives strength to our bilateral relations.

Highlighting the economic opportunities in Pakistan, Qureshi urged the diaspora to invest in various sectors of Pakistan economy and benefit from the investment-friendly regime of the country.

He briefed them about the investment opportunities in Pakistan and the structural reforms being carried out by the government, especially aimed at ease of doing business.

He highlighted Pakistan’s significance as a natural economic hub and the role it could play in changing global shift to Asia by virtue of its strategic geographic location in the region.

He appreciated their sentiments towards Pakistan and assured them of government’s full support in facilitating them towards implementation of their endeavours aimed at strengthening Pakistan’s economy.

The foreign minister also held an interaction with the British Pakistani parliamentarians.

Qureshi thanked for their support to Pakistan’s national objectives, particularly on economy cultural projections and Kashmir. He also commended their achievements and said the nation was proud of them. Qureshi appreciated their role in bringing the two countries closer and creating mutual understanding on issues of common interest.