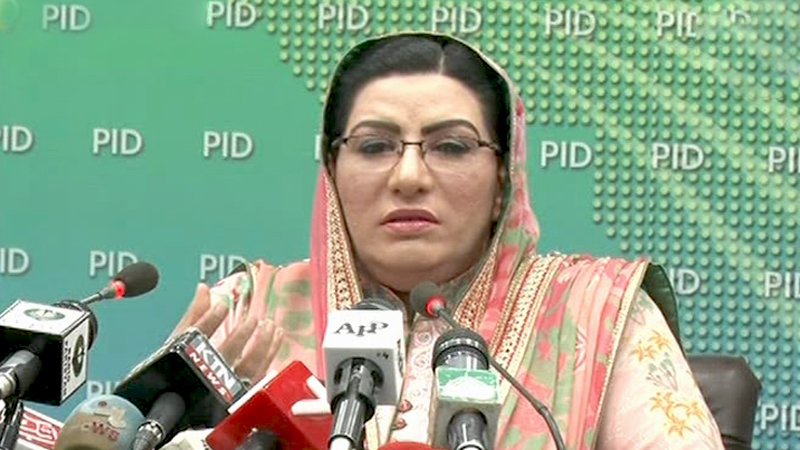 Special Assistant to the PM on Information and Broadcasting Dr Firdous Ashiq Awan on Wednesday said that those supporting Prime Minister Imran Khan were supporting Pakistan.

Addressing a press conference to announce the interim Wage Board Award for the newspaper workers, she said the people had voted for the Pakistan Tehreek-e-Insaf (PTI) to free themselves from two families, who had been taking turns ruling the country.

Dr Firdous said Imran Khan considered the media his strength and the media should support him in his efforts to steer the country out of the multiple crises caused by former rulers.

She said Leader of the Opposition Shehbaz Sharif twisted facts in his speech in the National Assembly and violated the agreement reached with the treasury benches that leaderships of both parties would listen to speeches by leaving after finishing his three-hour speech.

“In his speech, Shehbaz Sharif indulged in self-praise and did not touch the issue of wasting Rs 45 billion for his self-projection.”

Rejecting the opposition’s claim that the prime minister did not want the Parliament to run smoothly, she said Imran Khan fully believed in the supremacy of Constitution, parliament and other state institutions.

“Those who want to come to power through back-door channels have failed in their designs and the budget will be passed by the National Assembly,” she added.

The special assistant advised the opposition to suggest amendments through constitutional, parliamentary, and democratic manners, and not through hurling threats.

She said the amendments proposed by the opposition benches for the benefit of people would be incorporated in the budget and approved by the assembly. The budget was for the people and the opposition would hopefully make them discontented.

“From day one, the prime minister has been of the view that the budget is not for the government, but it is for the people and national institutions and that is why it will be passed by the National Assembly,” she added.

Dr Firdous said it was a step forward towards the permanent award, which would be announced soon. “The interim award is being announced with the consensus of all the stakeholders,” she added.

She said Prime Minister Imran Khan was committed to provide due rights to the workers and the government’s decision to fix minimum wage of Rs 17,500 was a proof of that. “The media workers’ struggle has been successful. For provision of justice to the media workers, the number of tribunals to decide litigation between the employers and the employees is being increased,” she added.

Dr Firdous said the government was also going to announce its media and advertising policy on August 14 after consultation with all the stakeholders.

She said she had personally taken up the issue of suspended grants of press clubs and news agencies with the prime minister, which had now been restored in the coming budget.

Eighth Wage Board Award Chairman Justice (r) Hasnat Ahmed Khan said the interim award had been announced and the consultations for permanent award were in final stages, which would be announced soon.

Principal Information Officer Tahir Khushnood said the media workers had succeeded after a long struggle and the government would ensure that its benefits reached all the media employees.

Separately, Special Assistant to Prime Minister on Information and Broadcasting Dr Firdous Ashiq Awan Wednesday said that audio tape attributed to her was edited and prepared by linking words spoken at different occasions.

In a tweet, she said that a certain group was spreading this audio on social media to achieve their ulterior motives. She said she had sent the copy of the audio to law enforcement departments for investigation.