* Islamabad, Kabul, UNHCR unanimously agree to 12-point joint declaration
* Afridi argues why world needs a body of a child on a coast to wake up to the refugee issue
* Afghan minister says Ghani's upcoming visit to Pakistan to be significant in resolving major bilateral issues 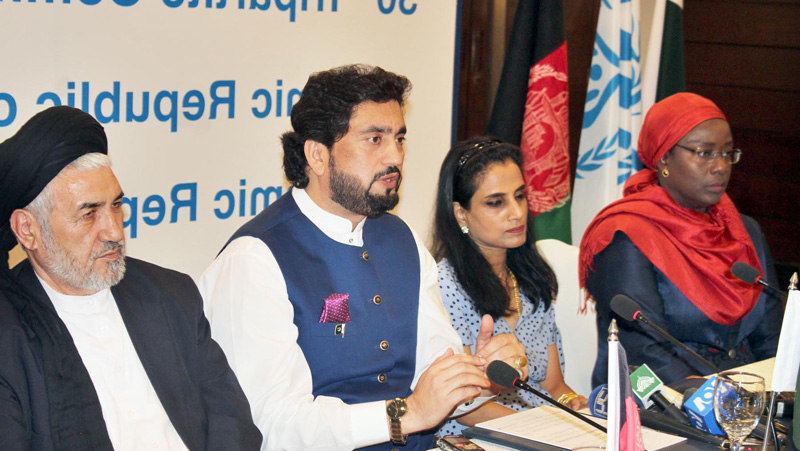 Pakistan, Afghanistan and the United Nations High Commissioner for Refugees (UNHCR) on Tuesday unanimously agreed to a 12-point joint declaration on conclusion of the 30th Tripartite Dialogue on safe and honourable repatriation of Afghan refugees.

Minister for SAFRON Shehryar Afridi represented Pakistan while the Afghan delegation was headed by Sayed Hussain Alemi Balkhi. UNHCR was represented by representative for the UN refugee agency in Pakistan, Ruvendrini Menikdiwela, UNHCR representative in Afghanistan Caroline Van Burn and others.

According to the 12-point communiqué, the three parties expressed their commitment to extend the existing Tripartite Agreement Governing the Voluntary Repatriation of Afghan Citizens Living in Pakistan, pending approval by Prime Minister Imran Khan’s federal cabinet.

All three parties recalled that 2019 marks the fortieth year since the beginning of large-scale Afghan refugee displacement and appreciated the hospitality of the Pakistani government in providing continued protection to Afghan refugees for four decades.

The three parties reaffirmed their commitment to uphold the principle of voluntary repatriation, in safety and with dignity, under the tripartite agreement; and urged enhanced efforts to create an environment conducive to voluntary return and sustainable reintegration in Afghanistan, and to continue supporting the host communities in Pakistan, within the framework of the Solutions Strategy for Afghan Refugees (SSAR). They also expressed concern at the decrease in the voluntary repatriation grant provided to the Afghan refugees, and encouraged the international community to increase the cash grant to its previous level (approx $400 per individual).

They also appreciated the progress made by the Afghan government in the development of the policy framework and action plan; the decision to implement the Comprehensive Refugee Response Framework (CRRF) which reaffirms the commitment to include refugee returnees in the National Priority Programmes, particularly the citizen’s charter; as well as the enactment of the Presidential Decree on Land Allocation.

The parties called for continued support for the implementation of these initiatives and requested that progress of these initiatives is shared with Afghan refugees in Pakistan – including through an awareness raising programme – in order to enable them to make an informed decision to voluntarily return, with the facilitation of and in coordination with the host government.

They welcomed the efforts of Afghanistan, UNHCR and other partners to promote targeted development interventions in “Priority Areas of Return and Reintegration” (PARRs) and called on the international community and development actors to support this important initiative with a view to enhancing absorption capacity and enabling sustainable reintegration of returning refugees through a whole-of-community approach in a tangible and predictable manner, in line with the commitments enshrined in the Global Compact on Refugees and agreed to share periodic updates on the progress in the implementation of this initiative. Later, addressing a joint press conference, Shehryar Afridi said it was a big day for Pakistan, Iran, Afghanistan and the UNHCR as well as for Afghan refugees that detailed deliberations were conducted to ensure respect and address their concerns and issues.

He said it was unfortunate to note that 85 percent refugees worldwide were being looked after by developing countries, including Pakistan, and “it’s about time that the developed world comes forth and play their role according to their international commitments and UN conventions”.

“We are carrying forward agenda of humanity. Pakistan has opened its doors to refugees and we are hosting them over for the past 40 years, but those countries who have signed UN conventions need to support Afghan refugees. We are following the spirit of Madina state where Ansaar had sacrificed for Mohajireen of Makkah,” he added.

He said Minister Balkhi had invited him to visit Afghanistan and see for himself the facilitation provided to Afghan returnees for their sustained reintegration in Afghanistan.

“Why the world needs a body of a child on a coast to wake up to the refugee issue? It’s about time that the nations who are silent spectators should come forth and extend support to Afghan refugees,” he said, and added that the world needed to heal the wounds of refugees who had been suffering for the past 40 years.

Afghan Minister Sayed Hussain Balkhi fully endorsed what Afridi said, adding, “Afridi is a man who has found a place in my heart”. “I would like to thank the government and people of Pakistan for 40 years of providing generous hospitality to Afghan refugees.