* 'I have been a die-hard fan of Indian cricket since childhood,' the actor says 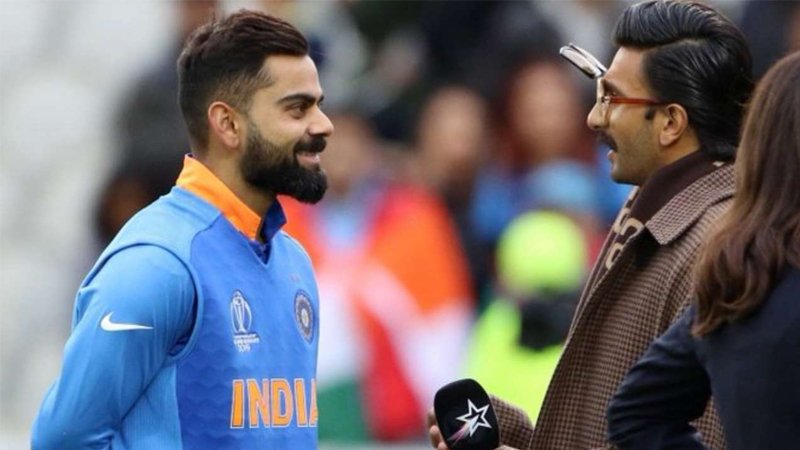 He cheered for the Men in Blue from the stands and celebrated their victory with full vigour. Now, the actor has taken to his social media accounts to heap praise on Indian skipper Virat Kohli.

Sharing a couple of photos with cricketer Virat Kohli, Ranveer Singh wrote on Twitter, “I have been a die-hard fan of Indian cricket since childhood. Invested so much emotion into our beloved team. Willing and wanting them to be the undisputed best in the world. And then, there was Virat Kohli. I’ve witnessed a brash boy evolve into the very embodiment of class. Displaying a rare brand of ferocity and passionate expression, he changed the face of Indian cricket forever. He’s well on his way to being hailed as the greatest of all time. Leading our country like a true alpha warrior. Yeh naya India hai, aur yeh banda naye India ka hero hai. We are proud of you, Kaptaan @virat.kohli.”

Virat Kohli became the fastest batsman to reach 11,000 runs in one-day internationals after scoring a half-century against Pakistan on Sunday

Virat Kohli became the fastest batsman to reach 11,000 runs in one-day internationals after scoring a half-century against Pakistan on Sunday.

The actor also shared a clip where he is seen celebrating the wicket of Pakistani batsman Babar Azam. He shared the video with the caption, “Come on India, Come on! @starsportsindia @icc @cricketworldcup.” Singh is prepping for the role of former Indian skipper Kapil Dev in ’83’. Helmed by Kabir Khan, the sports drama is scheduled for April 10, 2020 release. The film also has Deepika Padukone in the role of Kapil Dev’s wife Romi Bhatia.